A Day Of Two Halves - Second Half

Before I start the second half a couple of Parish Notices. First of all I have regretfully had to turn comment moderation on. This does not mean I will be editing or refusing to post comments that disagree with me, but I don't see why anyone should have to see comments inviting me to take my own life before I get the chance to delete them. So please keep commenting - it makes the blog - they just won't appear instantly for the time being.

Secondly some good news if, like me, you're a fan of the Short Set. Greater Anglia have confirmed that the Class 37 hauled set will be in use until at least early 2019 when the new fleet of trains arrive. The 68's are still due to go at the end of the year though but I must say I'm chuffed to bits over the 37's - far more nostalgia on the railways right now than there is in the bus world.

And so to the second half of what turned into an epic day. If you haven't read the First Half click here. I arrived at Paddington with one thing only on my mind. After having the security forces come down en masse on me in Kent just for taking pictures of trains at an official viewing point designed for enthusiasts to take pictures of trains at I didn't want to be surrounded by SWAT teams for daring to snap an HST so immediately sought somewhere to sign in. Took me ages to find, which involved asking three members of platform/gate staff who couldn't have been friendlier, and in one case really bubbly and giggly. I eventually found the office, signed in with another really nice lady, attached my ID to my lapel which got me in and out the barriers at will and got to work.

I went to Paddington with one thing in mind - HST's. 40 years old this year and I was after two of them in particular. However the bog standard ones don't look bad either! From nearest first we have 43169/056/140/141

This was the first time I'd been at Paddington for a good 13 years, and certainly the first time I had gone there purely for hobby reasons. There is certainly far more than HST's to see there. Paddington is also the terminus for the Heathrow Express, a quick but pricey route that uses Class 332 Siemens EMU's that I have to say look extremely smart inside after their 2013 refurb, I have never seen 1+1 seating on a train before, and is it just me or can you see where the front for the Class 68 locos came from? Here is 332004.

Now the sharp eyed will have noticed a train until recently unthinkable at Paddington. Great Western Railway are replacing their Class 165/6 DEMUs with brand new Class 387 Electrostars, now the GWR has been partially electrified. 387135 was standing out of service and was the only 387 I saw while I was there.

While we are looking at the new livery last Monday GWR launched it's new "The Welshman" service, and suitably decorated 43187/88 and a rake of coaches. So of course when I saw it on Friday it was about to leave for Penzance. Made perfect sense! Have to say looks good though.

GWR have realised the photogenic potential of the HST's  just as TfL have the Borismasters, and there were a couple more examples on show. First of all here is 43126 extolling the virtues of Bristol. 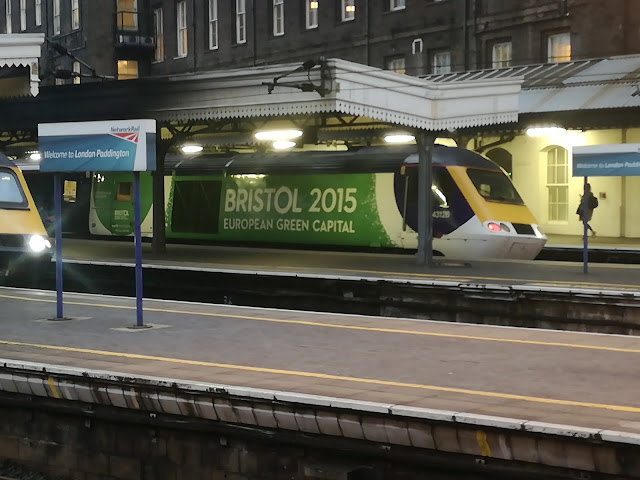 And here is 43146 with some self publicity for GWR 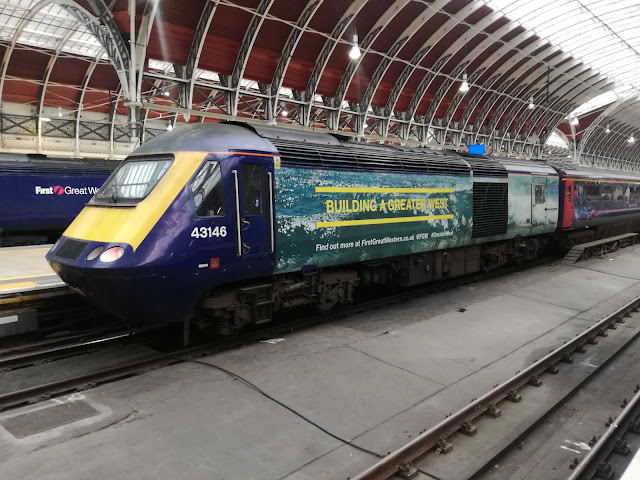 The biggest surprise I had at Paddington was a service I didn't know existed together with rolling stock I wasn't expecting. To be fair it's only been running 11 years and as I haven't been to either Paddington or Heathrow in that time I forgive myself even if no one else will. The Heathrow Connect is a stopping service from Paddington to Heathrow, taking 15 mins longer but far less from your wallet, using 5 car Class 360 Desiros, which I thought, in my ignorance, were only to be found on the GEML. Not so, as Heathrow Express also have one 360 for the Terminal 4 shuttle.

Now I need to thank someone. My main aim was to see two very special HST's. GWR were unable to tell me where they were but Leo Martin, who I met on Railcam did. Thanks to Leo I was at the right place at the right time to catch firstly 43185, recently repainted in Intercity Swallow livery (not sure if African or European swallow for Python fans) and then what I regard to be THE Holy Grail on the railways right now, 43002, painted in original BR livery and named Sir Kenneth Grange, the genius who designed these remarkable trains. I owe you, Leo, couldn't have done it without you mate.

Yes of course there's a video of them both arriving at Paddington, which is where Leo needs all the credit, as it was from his info I was able to be on the right platforms.


I'll put many more pictures up on Flickr when I get round to it! I would just like to thank all the lovely people at Paddington, a really friendly station. In the meantime I made my way home which included an extreme game of sardines on the Jubilee line, and reflected on quite a day.
Posted by Steve W at 17:05