We left my trip oop North rather differently in the Gents loos at Carlisle station, having survived the night thanks to the decent night team there. At 0500 exactly the ticket office opened and I purchased my Round Robin Day Ranger which gave me freedom of the WCML and Cumbrian coast line between Carlisle and Lancaster. So over to Platform 1 where my accommodation for the next few hours was waiting.

We are spoiled here in East Anglia with our short sets. 6 days a week we can travel on the main line behind a snarling Class 37 and almost take it for granted. The only other line in the country to have 37's is the Cumbrian coast line from Carlisle to Preston via Barrow in Furness. Unlike Norfolk there is only one loco, not two, but the route is considerably longer. Norwich to Lowestoft takes around 45 mins. Carlisle to Preston via the Cumbrian coast takes 4h47m, so you can get a really big shot of the 37 drug. Oh and a small matter of 35 stops if all request stations are called at, and the vast majority were - I think.

I say I think as it soon became clear that the weather wasn't playing ball and the Cumbrian coast was shrouded in mist meaning there was little of the promised spectacular views to be seen. So I allowed the gentle rocking of the comfortable Mark II coaches and throb of the 37 to lull me to sleep, and sleep I did. I always sleep with music on anyway and a 37 provides one of the best soundtracks possible!

I was vaguely aware of the train getting very busy as we approached Sellafield, and again Barrow, which was good to see. I got off at Lancaster, had a chat with the driver who confirmed the 37's are allowed a top speed of 80mph now, which we don't get in Norfolk, and got the mother of all videos of the set pulling out towards Preston, which will be included in the compilation of videos I'll post at the end of this series.
I left Lancaster station in search of some breakfast and immediately came across a very small sandwich bar, and again was privileged to be treated to the amazing Northern friendliness. The lady in the sandwich bar greeted me like a life long friend, then when I told her what my plans for the day were promptly got her tablet out and checked the weather forecast for me, insisting it would soon cheer up and the rest of the day would be fine. When you're traveling alone it's things like that which make all the difference. I shall return! She was also right. As we pulled out of Lancaster on the return journey things indeed started to cheer up and I realised I'd get to see what the mist had covered on the way out.

It's very nice, some lovely parts of the line hug the coast and you can get views like this... 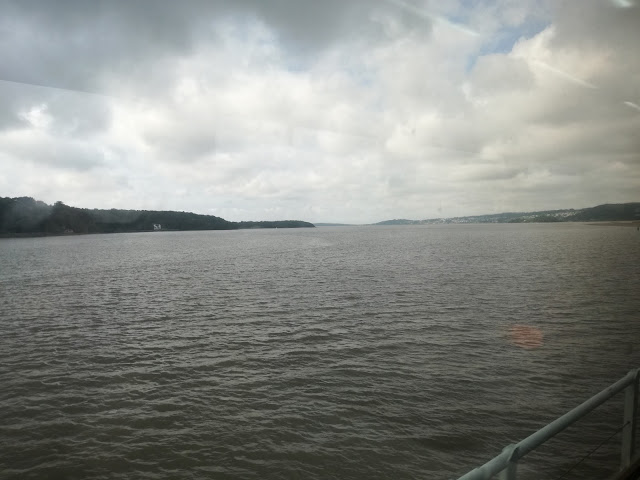 The line also passes West Coast Rail's depot at Carnforth so you get views like this too!

We had a very rushed scramble to change trains at Barrow, where the other hauled set was waiting, this time with "Angry Bob" 37425 at the head. I was the wrong side of the train for the more scenic shots, and in all honesty I know some think that line better than Dawlish and the South Devon section of the GWR but I disagree. I would happily spend the rest of time behind a 37 on the Cumbrian line, but only for the 37. It's a really lovely line but it's not Devon.

Some serious phone charging was now needed so I decided another trip to Lancaster and back was in order, this time on the main line. A second Pendolino confirmed that they truly go like the clappers and the tilting is great, but again wouldn't be pleasant when full, and a Voyager back, which has power points at every seat so actually more convenient for my needs. They don't hang around either!

Back at Carlisle for tea, then it was time to head to platform 6 for the journey I had waited for many years to do. The Settle & Carlisle line to Leeds.

The tiredness was really creeping up on me now and the 158 was one of the hottest trains I'd been on, so staying awake for the first part of the journey was a problem. it was also annoying as obviously this is one trip I didn't want to sleep through. However at Kirkby Stephen I was jolted awake and realised this was the part of the line to stay awake for. What had been England's green and pleasant land turned into England's green and stunning land, as we weaved our way through the Yorkshire Dales. Camera glued to the window. 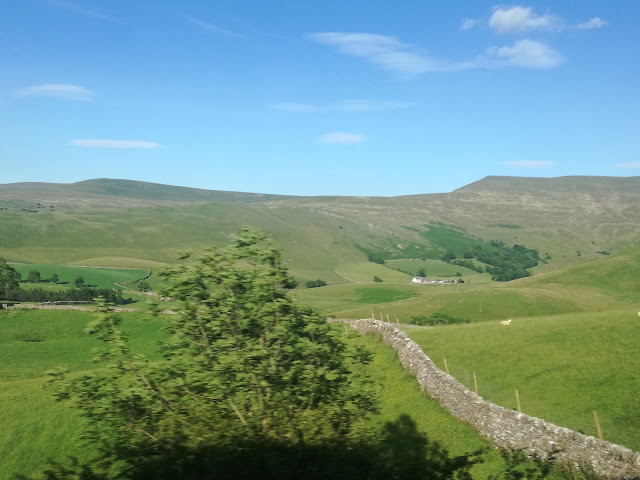 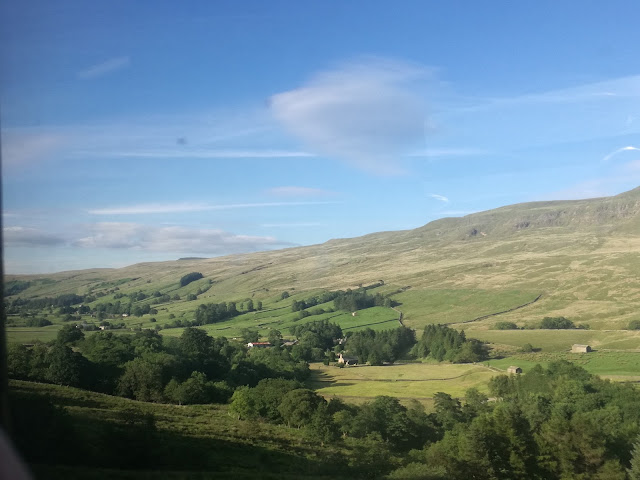 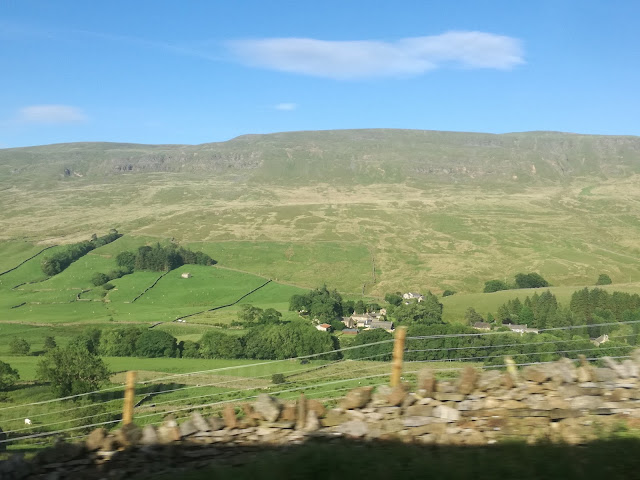 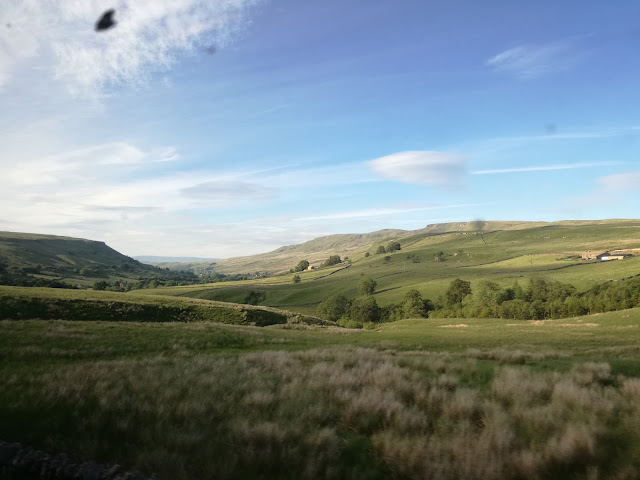 And then it was over the famous Ribblehead Viaduct, where I have watched countless trains pass over thanks to Railcam. 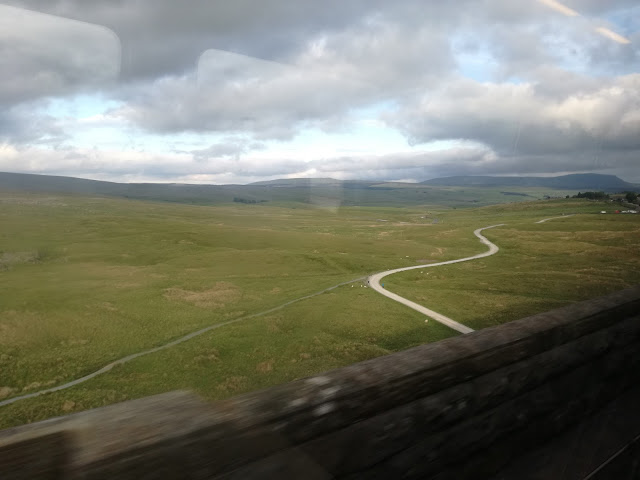 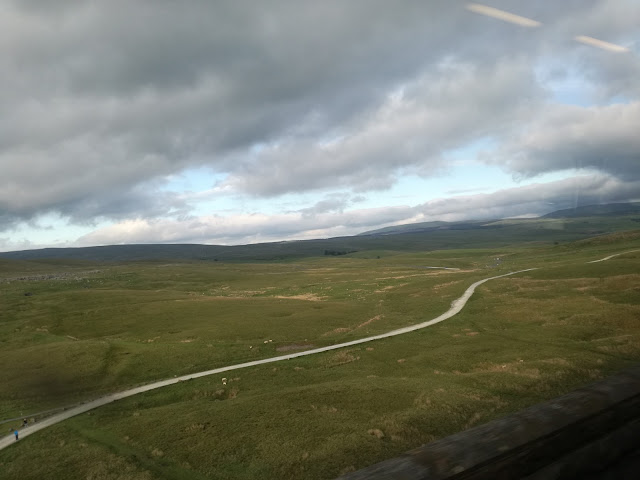 If you have ever watched Railcam's Ribblehead Station camera here it is, a little device bringing great pleasure to many. 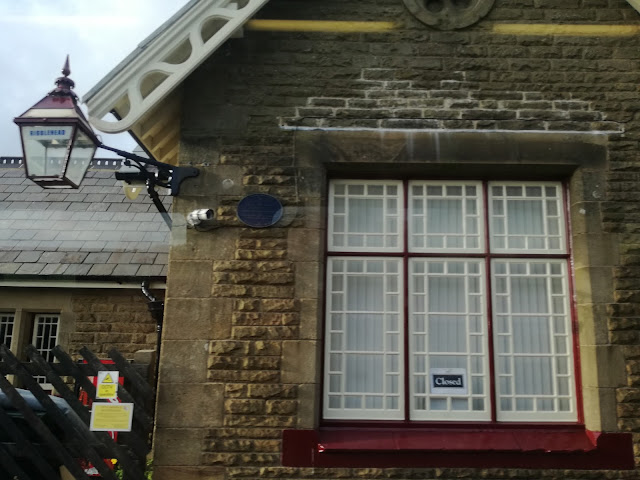 Then on to Horton in Ribblesdale and Settle. 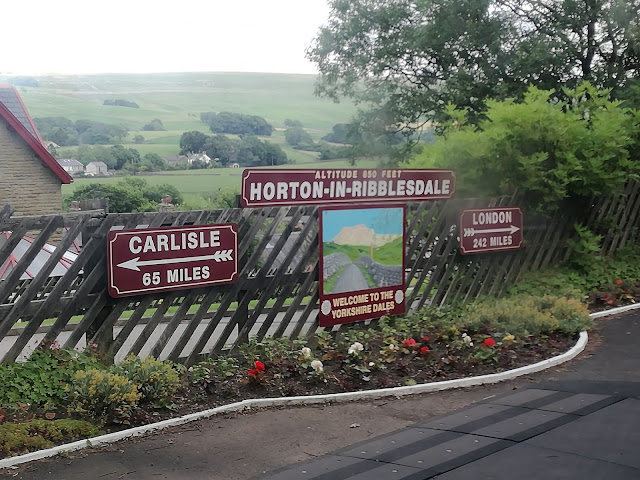 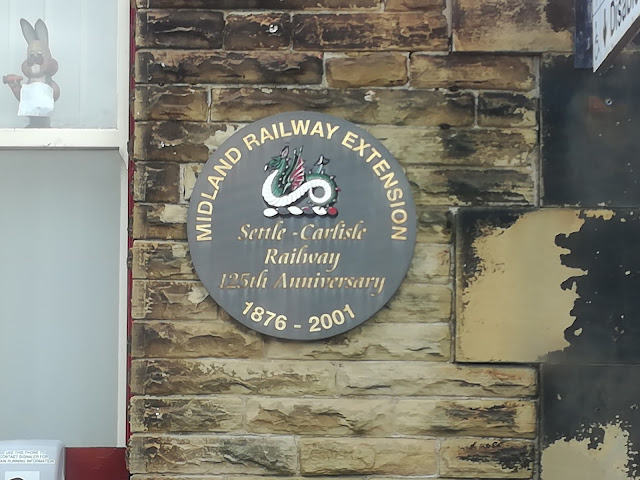 After Settle the landscape levels out and it's a fairly straightforward run into Leeds. This is a truly spectacular line, and lived up to expectation. I'm so pleased it was saved from closure in the 80's but I do have a couple of suggestions. Firstly £30 for a Day Ranger ticket on the line is a bit pricey and £90 for a family of 4 for a day has got to be very off putting. Lower the price, do a decent family deal and you will have them flocking. Include a hauled service and you would need extra capacity on the line. There is huge potential for added use of this line but not too much going on to tap into that potential. Secondly, particularly in the Summer run trains a little later. The 1814 was the last service from Carlisle and that really is a tad early.

My own verdict is going to be controversial. I would do the S&C again in a heartbeat, I truly would, but I'd walk over hot coals to do the Kyle - Inverness line. The views on the S&C are wonderful, brought a fixed smile to my tired face, but not the wow factor the Kyle line has. Then there's the terminii. Leeds is ok, but it's not Kyle with it's mountains, Skye Bridge and seals. So I'm sorry but given the choice the Kyle line gets my vote.

I arrived at Leeds roughly 9 hours before my coach to London left, with one more thing to do. I was catching the bus to York, staying there a few hours before returning to Leeds by train, so it was time to find the coach station. A couple of friendly BTP officers gave me perfect directions to Leeds coach station, which is on the large side!

After the best chicken kebab I have ever had I caught the Yorkshire Coastliner service to York. My chariot was a Volvo B5tl on a Wright Gemini3 body. The interior was spectacular - here is the top deck.

The B5tl is very powerful, great acceleration, and that interior, complete with phone chargers is sublime. But the body is still the weak link. A very hard ride making typing on the phone next to impossible, and rattles that just shouldn't be there. A shame as that interior deserves better - much better.

An hour later and I was at York Station for the first time in 40 years. It turns out I didn't need to see anyone as the station is open all night anyway due to the Trans Pennine services to and from Manchester Airport. And not as entertaining as Carlisle as the freight uses the avoiding lines so not much to see. No open loos either so I wandered into the City, found a 24hr McDonald's, refuelled, and ended up taking pics of York Minster at 1am, as you do! 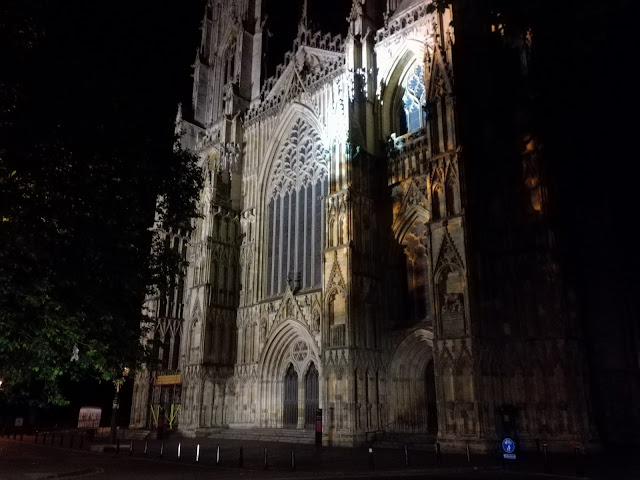 Back at the station it was just a time killing exercise until my 0400 train back to Leeds. A Trans Pennine Class 185 which left me rather underwhelmed. Not the best seats, no charging points, harsh lighting. but it did the job and I was back in Leeds.

I boarded the magnificent Megabus Volvo B11R at Leeds, closed my eyes and in seconds was in London again. I have never had a shorter coach journey!

I had time in London to grab a couple of pics, including my first capture of one of National Express's
£400K double deck Levantes.

A stroll through St James Park to Whitehall, an 11 back to the coach station, and one last pleasantry on this mammoth trip, as Heritage liveried L60 pulled up. It seems any livery suits the Borismaster but this looked just wonderful in the sun. A perfect end to a wonderful experience, London Midland excepted! 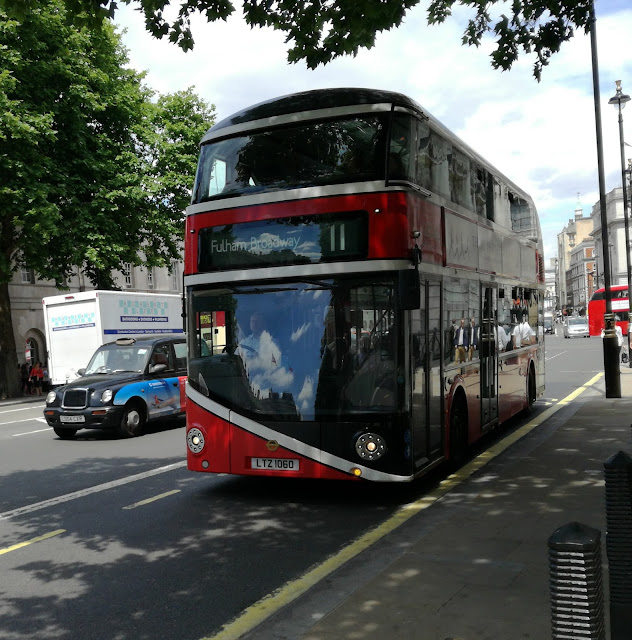 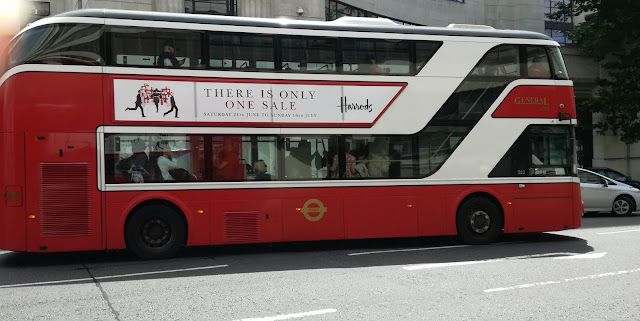 And that was that. To complete the circle I had the same Scania Iriza back to Norwich, and reflected on a memorable trip that seemed to last far more than 60 hours. Next one in the planning but doubt it will be for some time.

I had no plans to make this post so long, but there are other things to report this coming week. So, as promised here is the 9in video of  the night in Carlisle and the 37 at Lancaster. Enjoy.