On the seventh day of Christmas Nu Venture gave to me, a really good running day! I attended last year's event, held at Asda in Gillingham. It was bitterly cold, and while it was ok it never really got the juices flowing. This year was different, much different. Held at a dedicated coach park near Rochester Station the event was in part to celebrate 20 years of Nu Venture in Medway. To be honest I thought it was longer than that but they should know. Anyhow this event was extremely well attended bearing in mind the time of year, with a really good variety of vehicles. I arrived fairly early to get some uncluttered pictures.

All the above vehicles were on static display, although the DMS did make one very late afternoon trip out. However 20 buses were out on various trips around Medway, and I managed to get on 5 of them. I must commend the organisation of this event. All buses going out had running letters which correlated to the timetables, so you could plan what you went on and when. Very impressed with that.

My first ride was on the only short Boorismaster built, ST812. Not only that it was driven by Matt, a regular correspondent on this blog. It was great to finally meet you, Matt, thanks for bringing 812 and hope to see you again soon. As for 812? Well you should all know by now I love Borismasters, and although this shorter version has too few seats downstairs for my liking you couldn't fault the ride. Never did I think I'd see a Boris in Medway. That was fun! Btw look at the bottom pic - when you have 3 doors which one do you have kerb side!! Medway hadn't planned for that!


Some buses are a bit run of the mill, even preserved ones, but some stand out like an ice cream van in the Sahara. The BEA AEC Regal IV airport bus is one of them. It looks so quirky. Purchased in 1953 for use on the Waterloo - Heathrow service this bus has been lovingly restored and is quite something. Old Greenline seats mean simply the most sumptuous bus seats I've sat in.

As we trundled along, going past my old school, it dawned on me I would happily travel on this bus anywhere, anytime and any place. I'd happily have it in service. I'd love a tardis to go back to 1953 and travel on one when they were the future. A joy to ride, and as you can imagine it was very popular.


Back in Rochester I met up with my old school chum and Stagecoach South East Director Matthew Arnold for a natter before he went off to ride the Regal and I waited for my next steed. I have always liked Scanias, especially the powerful Scanias of the 80's and 90's. This particular Scania, from Autocar of Five Oak Green near Tonbridge has a particular claim to fame I wasn't aware of when I rode it. It is apparently the last step entrance decker built for a British operator. So a trip up to Rochester Airport beckoned. Sadly not the best pic.

The traditional Scania power was in clear evidence but the legroom upstairs was negligible, which rather spoiled things. Take a few seats out and boy you have a bus there!

However with a burger costing more than the Dart did when new I gave lunch a miss and went in search of Kelvin.

Who is Kelvin I hear you ask! Well Kelvin Pinnock is the owner of a special bus. Arguably, from a personal point of view the most important bus in the country. When I was going to school, waiting at a chilly bus stop with Foden tippers hammering by, if 5385 came round the corner I knew it was going to be a good day. Volvo Ailsas were different. Very different, more a truck with seats than a bus. Front engined, driver got in from the offside, unique layout upstairs, a glorious soundtrack and power. Lots and lots of power. 5385 survives, and thanks to Kelvin it feels exactly as it used to all those years ago.

I clearly remember as a 13yo sitting on the engine cover chatting to a driver going out to the Isle of Grain and back on 5385. not sure I could do that now! Anyway getting to know Kelvin over the last few months on Twitter paid off as I was able to bag MY seat! The seat I spent so many hours in as a boy. The seat who if anyone else dared sit in it would result in unparalleled resentment. The best bus seat ever, anywhere in the history of buses. No one ever disturbed you there. The seat!!

These days Health & Safety busybodies would have a field day at a stairwell coming out by the windscreen but in the 70's it was unique and made that front seat the best. 35 years on I was back in that same seat, heading for a new development, Peter's Village, which involved crossing the newest bridge over the Medway. What I wasn't expecting, though, was the route we took, which passed through my home village. Not Memory Lane but Memory M25! As soon as I realised the route the phone was switched to video, as this was one that might never be repeated, and for those who have never been on an Ailsa just listen to that soundtrack, whistling turbos and whining axles. The route takes you by the Medway bridges including HS1, and across the Medway Valley line just before the new bridge to Peter's Village

Not wanting to lose my seat for the return journey I declined the photo opportunity at Peter's Village, so I'm grateful to Kelvin for letting me use his.

Even better while I have been writing the post Man of Kent has been in touch with a photo he took from the other side! Many thanks, pal.

It was on the way back I had an idea. I've had many memories rekindled recently, but to get a photo of a bus I used to catch at the stop I used to catch it was an opportunity not to be missed. I popped downstairs and asked Kelvin if he wouldn't mind stopping for me. The gent that he is agreed, and although this may not be the best photo of a bus ever taken, for me it is pure gold and I'll admit to feeling quite emotional. The only thing missing is around 50 schoolkids pushing to get on! Kelvin, mate, you are a star. Thank you so much.

There was still time for one more trip, and again on a bus I remember being in service. East Kent Daimler Fleetline RFN 953G is one of the more familiar vehicles on the Kent preservation scene, although it has recently changed owners. However I have not been on it since it entered preservation many moons ago so I put that right. I even stayed downstairs so I could listen to the deep rumble of the Daimler engine.


And that was that. A superb day, superbly organised, and superbly attended. Thanks in no small part to Chris Jenkinson and everyone else at Nu Venture for making this right up there with the best days I had in 2017. Looking forward already to next year, although sadly due to a primary school about to be built on the coach park the event will be changing locations. Thanks to Matt, Matthew, especially Kelvin, and everyone else I met there. Thanks to all those bus owners who brought their pride and joys to the event. Oh - it was all free, no charge, no entrance fee, no you must do this before seeing the buses with the programme costing Matthew only 3 quid! Top marks.

I'll leave you with a few other vehicles that turned up (no, Ensignbus I didn't forget you), finishing with the 2 best together! Happy New Year everyone. 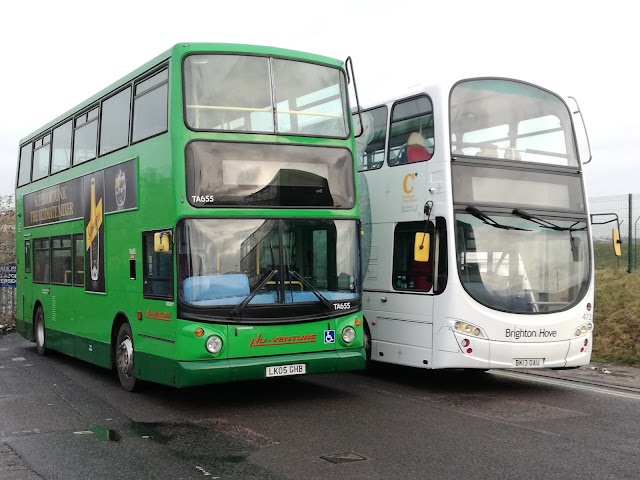 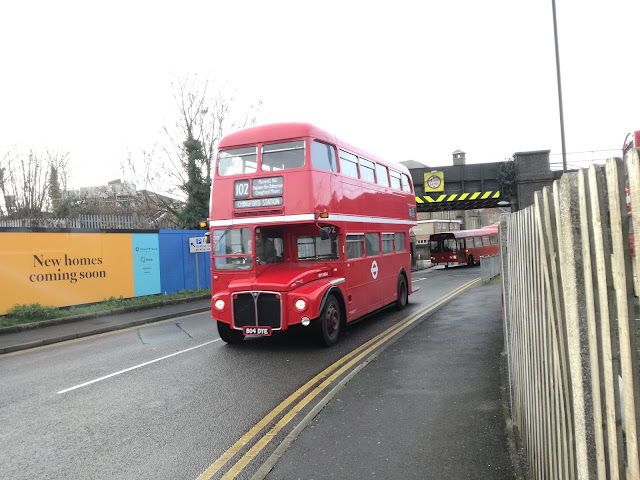 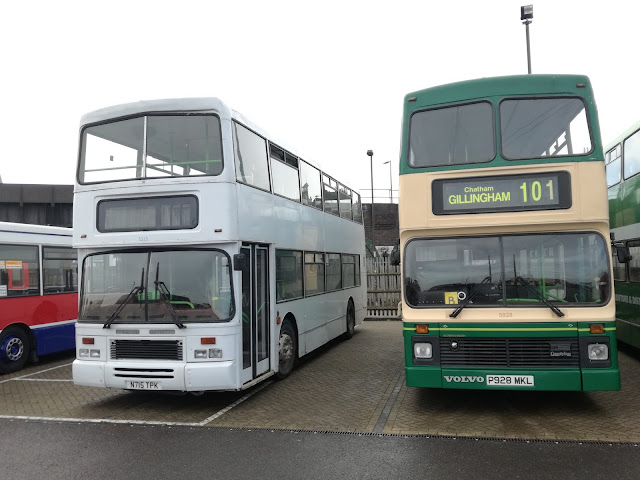 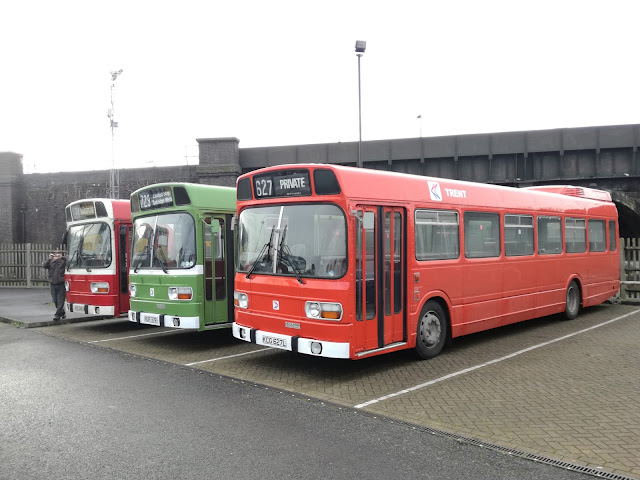 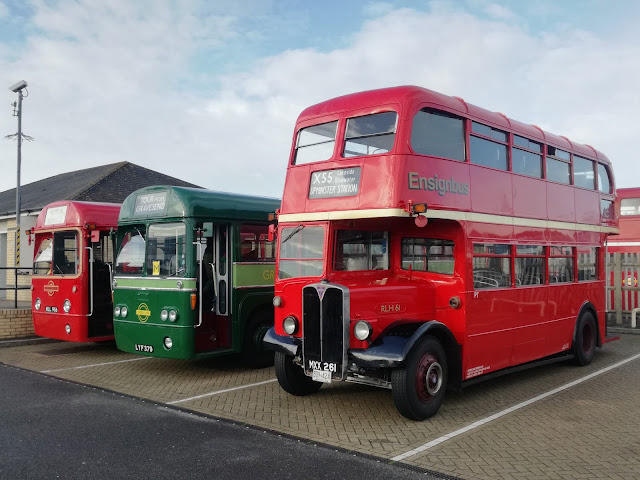 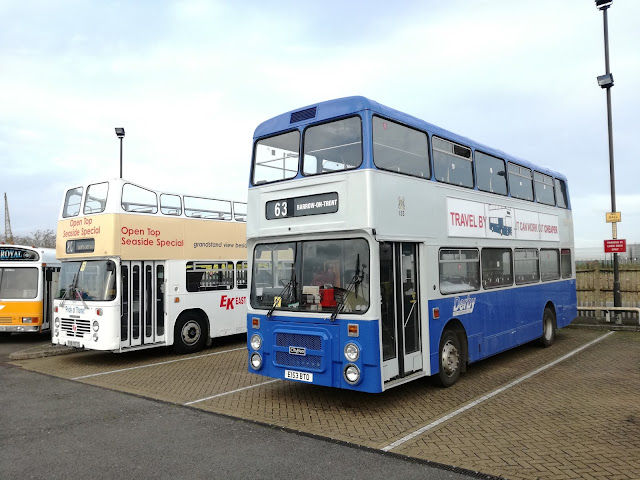 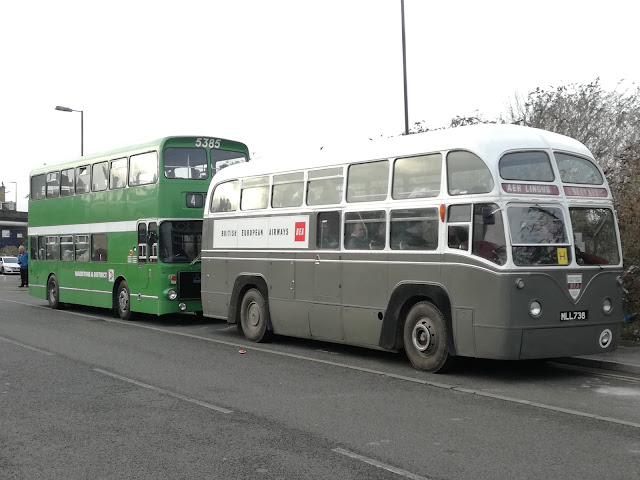