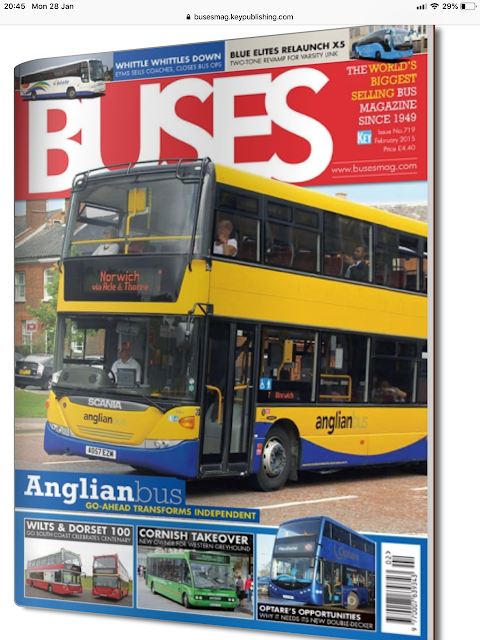 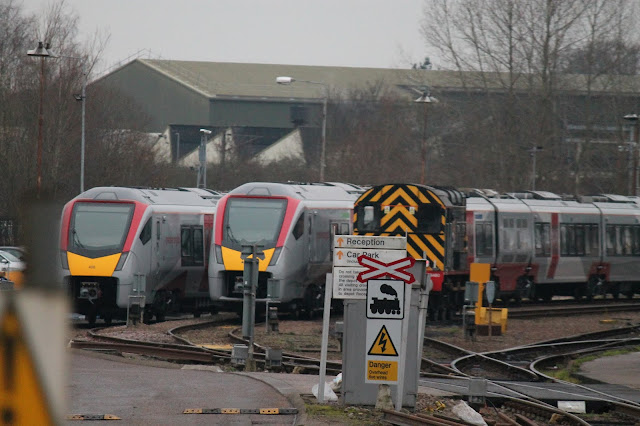 Posted by suffolkraider at 15:01 7 comments:

Hi, everyone, and a Happy New Year. I hope you have all recovered from the silly season, and ready for what could be quite a year. A few things to report, and some blog news.

First of all the long anticipated takeover of Galloway by Stephensons of Essex was completed on Jan 2nd. I am told this should not have any impact on Galloway's Suffolk bus services, but as usual time will tell.

Staying in Essex both Hedingham and Chambers have de-registered all their bus routes. These were immediately re-registered under Konect. I have not heard any reports of the Hedingham or Chambers names disappearing, so this maybe for insurance reasons. However legal lettering on the buses will have to change.

A couple of weeks ago Stagecoach announced they were pulling the plug on their USA operations. I wondered what Mick Capon, a long time sufferer sorry reader of the blog in North Carolina would make of it. I'm delighted that Mick has replied, and I reproduce his email here.

A belated Merry Christmas to you and a Happy New Year.

I tried, in vain, to add a comment on the topic of Stagecoach here in the US, but whatever profile I used it would not accept it. Strange that.

I'm not totally surprised by the withdrawal. The only Stagecoach presence I see here in Durham, NC, is the twice-daily Charlotte-Durham-Richmond-DC Megabus Van Hools passing through. They always seem well loaded, but the fares are ridiculously cheap. It's not difficult to get a $10 ticket from Durham to DC as opposed to the cheapest Amtrak fare of $59. Added to that the journey time is far quicker (5 hrs 30 by Megabus, 7 hrs plus by Amtrak), so unless the new owners continue this service it will be missed I'm sure.

Given some press reports I've seen, I cannot imagine First staying here either. They have, I think, a much large presence, especially in the school bus market. In fact, our local transit operator, Go Durham use First to operate their services, although the authority owns the buses and employ the drivers (operators). This is common practice here with neighboring city system Go Raleigh operated by Transdev.

Fares in Durham are still $1, the same as when we moved here in 2006! Seniors pay nothing and are never "Twearly!"  Timetables are constant also, usually starting at 5:00 a.m. and finishing at midnight or later, with only slightly reduced schedules on Sundays. Schedules are typically updated twice a year as new routes are added and existing routes routes are adjusted, usually following public consultation.

I love the blog, Steve. You're a good egg for putting up with so much negativity from the trolls. One commentator, in particular, has so much to say that I'm surprised he doesn't start his own blog. Come to think of it, no, I'm not!

Many thanks, Mick, and thanks for your kind words, which I included as it brings me nicely to the blog news.

Last night in the space of 40 minutes there were 18 troll comments posted on the blog. It is unfair on me to have to keep constantly checking comments in case some numpty wants me to do myself in, and it's unfair on you decent folks to have to read them before I get there myself. Therefore, I've decided that all comments will be moderated from now on. It won't affect anyone's ability to comment, but it will delay the comment's publication. Tim will be helping me with the moderation, so thanks to him for that. It was either that or stop comments altogether, which I didn't want to do, as the majority of comments make this blog. A shame a few idiots have to wreck it for everyone else, but that's the way of the world these days. So carry on with them, maybe don't take everything quite so seriously - it's a hobby after all, and we'll see what this year brings.

Sorry, having probs with formatting, never had this prob before, just read between the colours!
Posted by Steve W at 18:43 34 comments: