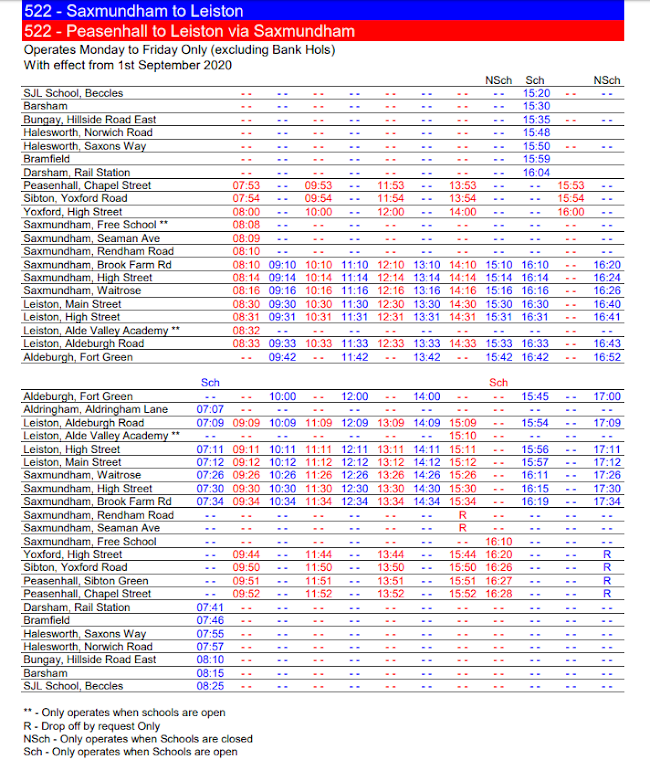 I'm guessing here, but it looks like Borderbus have won a school contract serving Leiston Academy from Whincops of Peasenhall, which would explain the Peasenhall terminus. I really should have asked but I'm a little rusty after 3 and a half months so I'm sure Andrew Pursey will correct me if I'm wrong. Sir John Leman School in Beccles continues to attract pupils from all over the county, and the Leiston to SJL is either a new route or a contract won from another operator. Either way it's great to see the buses put to good use while the kids are at school - if it's ever safe for them to go back that is!
However, as locals will know, there is already an hourly service between Saxmundham and Aldeburgh provided by First Eastern Counties' 64 from Ipswich. I can't see any variations to the route on the 522, so is there the demand for another bus, especially between Leiston and Saxmundham where there really isn't much apart from fields. This is where the theoretical side of me has gone into overdrive.
Chris Speed of FEC has long told me the 64 loses money hand over fist between Wickham Market and Saxmundham - indeed a few years ago it went to two hourly before being restored to hourly through council subsidy. Will the introduction of the 522 give First the excuse they need to pull out of Aldeburgh and Saxmundham once and for all? Will Suffolk CC still subsidise the Wickham Market to Sax part of the journey at a reduced frequency or will that link be lost forever?
If First pull out of Aldeburgh then will Borderbus step in and restart the immensely popular Anglian 165 Aldeburgh to Ipswich via Snape service that was so savagely cut by Phil Eden when he replaced Andrew Pursey there. One of the reasons was logistics in case of breakdown - it's a long way from Beccles to Ipswich to deal with a breakdown, but Anglian managed it pre Go Ahead so who knows what the long term thinking is. It's going to be interesting to watch developments.
My job now is to make sure the people of Peasenhall actually use the bus so there is no excuse to get rid of it again. Easier said than done, but opportunities like this don't happen every day! My thanks to Andrew for surprising me with the news (that's an understatement) and giving me the green light to go public. I should also say that Borderbus have retained the tender for the 521 for another 5 years, which is good news for both them, and the communities served by that important link. A 5 year tender in the current climate is some achievement, I think.
There will be another post in a few days with an update on a bus I was lucky enough to drive in days of yore, that I featured a few years ago on here. In the meantime stay safe, and try to avoid the lemmings who think the virus has gone and it's back to normal!
Posted by Steve W at 00:06 8 comments: