The Big Cat That's Got The Cream

On Monday I had my first proper day out since November, and ventured up to North Norfolk to sample the two newest double decker buses in East Anglia. Kings Lynn based Lynx (it has only just dawned on me how clever that name is) have splashed out on two ADL E400MMC's for their flagship Coastliner route between Kings Lynn and Fakenham. Always happy to publicise new vehicles in our area, with the exception of Streetlites, I decided to go and try them out. With help from Lynx driver and good friend Sam Larke - yes, he who used to make my life a misery when running Norwich Buses blog - I was able to plan a return trip to Hunstanton which would enable me to travel on both of the new buses. Indeed, I had a good natter with Sam before nipping up to the car park roof at Kings Lynn bus station to take a few videos, including Sam leaving on his own departure to Hunstanton. He's turned out ok! 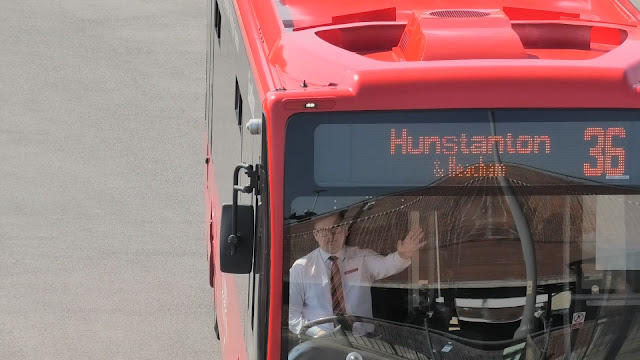 By this time the first of the new deckers had arrived, taking a break before following Sam an hour behind. I have to say it looks superb. 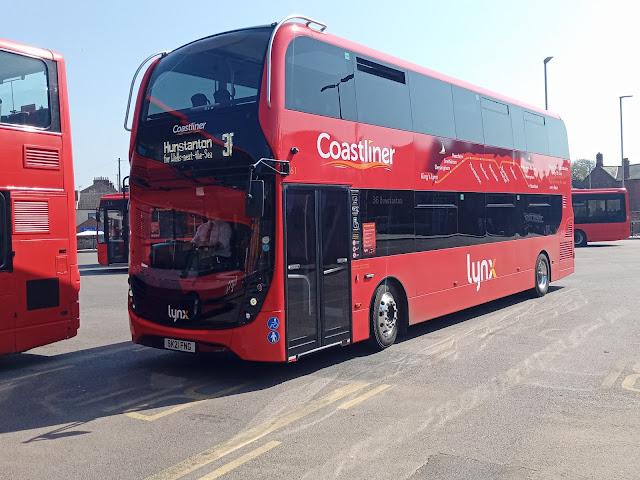 So I boarded, and was greeted with that lovely new smell. The interior is good, with a smart moquette and an attractive and very comfortable seat design. Luggage rack downstairs and tables upstairs. USB and wireless charging is available with bell pushes on the rear of every seat. 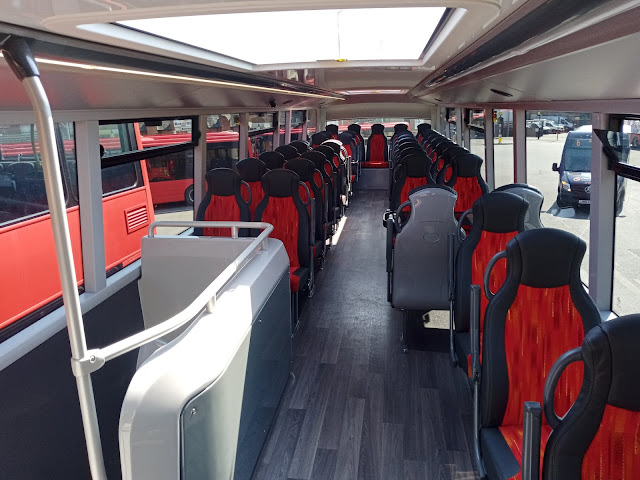 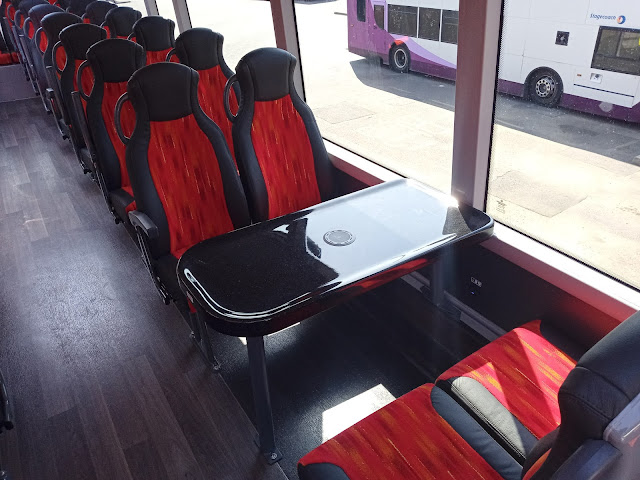 Off we went, and I was hoping ADL had improved the ride of the E400 as much as they have the E200. It was ok - quiet, smooth and little body noise, although it being only their 3rd day in services there shouldn't have been. However, it didn't feel that solid and I finally thought of the right analogy for riding a new E400MMC. It's like watching your child perform. You know how much effort has gone in to the preparations, be it practice, rehearsal, training etc. The costume/outfit/strip is pristine, no other child looks better than yours yet you watch them with your stomach tied in knots, knowing that everything could fall apart at any moment - the wrong note, forgotten line, open goal missed, the fall off the beam etc and you'll end up mopping up a tearful and distraught child. I had that feeling on Monday. The presentation is superb, both inside and out. Everything is pleasing on the eye, yet you have that sickly feeling inside that one large pothole and everything will start falling apart and rattling like a 1930's football crowd. That is a shame, but I never had that feeling with Olympians, and I don't with Metrodeckers or BCI's. It is so frustrating that 95% of the bus is excellent, yet that missing 5% makes all the difference - the 'that'll do' attitude. I was talking to a manager the other day who was totally exasperated that the new MMC he took out for a test run had a cab door that rattled. What I really can't understand is how ADL seem ok with this and keep churning them out. Where's their pride in their product?

Anyhow I'll go back in a few months and hope to be proved wrong - at least the roads in North Norfolk are better than most. If I was being cynical I'd say it was due to the proximity to Sandringham but surely not!

Sam had told me if everything was running to time I'd get the chance to film the two new buses together at the soon to be demolished Hunstanton bus station, and he was right. Never mind my niggles about the ride, they look magnificent. By time you read this both should have their vinyls applied so to get the all red one before vinyls was good. 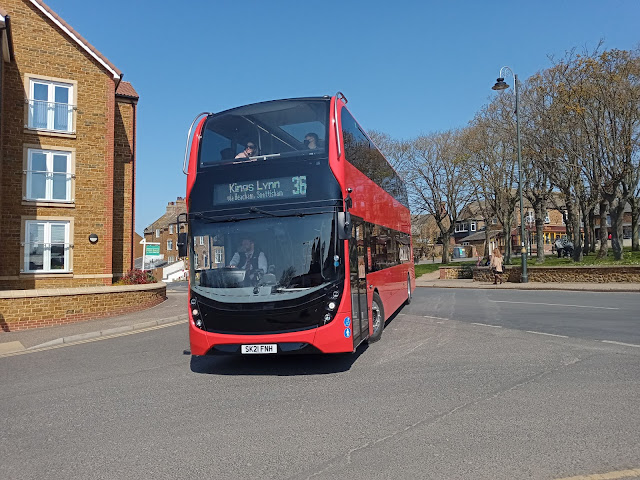 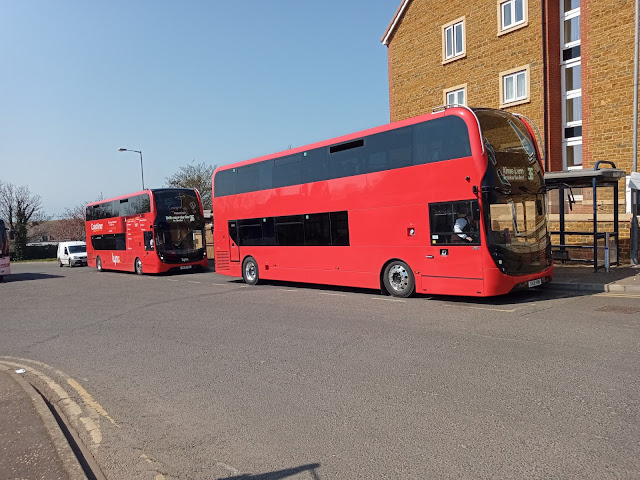 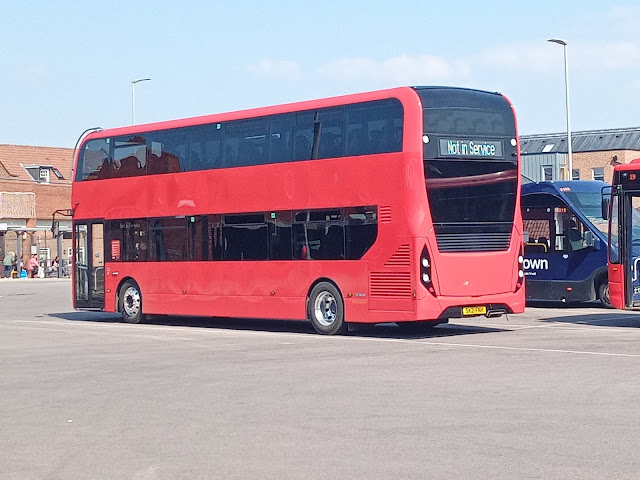 A word about the operator. Lynx are arguably the best operator for their size in East Anglia. Their buses, and staff, are always immaculately turned out, their network of routes is good, their fleet is good, and I would spend far more time over there if it wasn't for one thing. Even in my boyhood I wouldn't travel on routes operated by single deckers for fun, unless it was vital to link up with another route. If there was a way of getting where I wanted by double decker that is how I would go. It still is. Unless it's to review a new vehicle or unavoidable I don't like travelling by single decker - there are only a couple of decent seats on a single decker and they get taken quickly. One of the joys of double deckers is you see things you never see in a car, or single decker! The journey to Hunstanton and back on Monday was made so much more enjoyable because of the views - some of them stunning - from the top deck. I'll be back to do the full run to Fakenham, but only on a double decker, rattles or not! Nothing wrong with Tempos for commuting or shopping purposes, but for fun you cannot beat a top deck.

I also took the opportunity to see how the E400 Citys on First's Excel route were fearing, 14 months after their introduction. Well, the body noise was roughly what I expected, although there seemed to be a lot more coming up from the lower deck than there was on top. The CIS screens weren't working, neither was the WiFi, and the next stop announcement was spasmodic to say the least. The seats don't feel nearly as comfortable as they look, yet from the outside the buses still look seriously eye catching - an ADL trait! 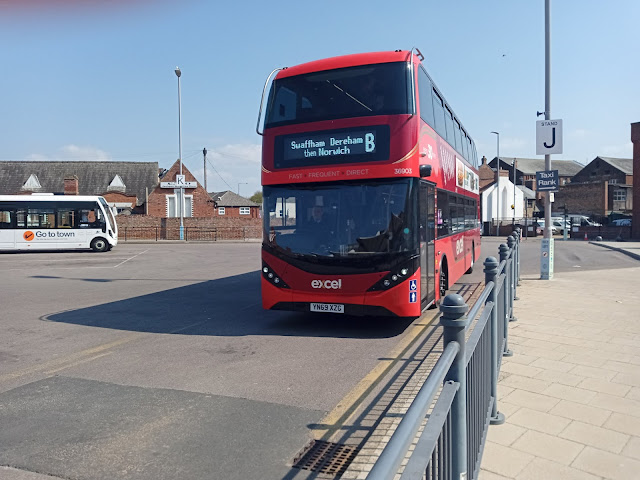 Then to finish the day I travelled to Beccles on one of the predecessors of the E400 City on the Excel route, that are now plying their trade on the Coastlink X1/X2/22 services. Again they look great, but the buses are really showing their age (all of 8 years) and 33814 was drowning out its own engine in body noise. But it was a double decker, and on a glorious day like Monday, sometimes the wonder of the views can drown out even ADL rattles! 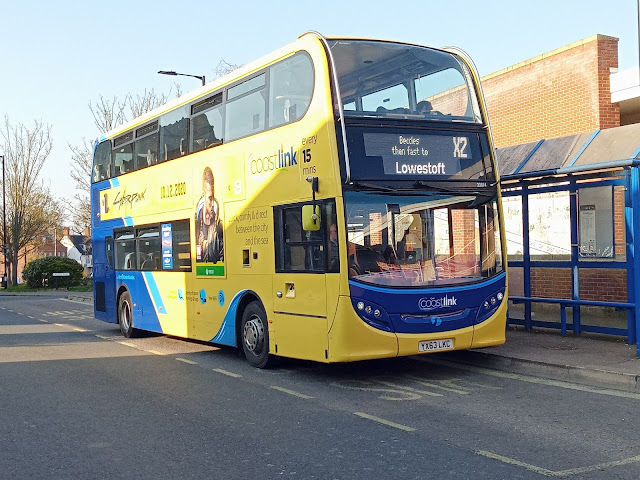