Doris Day Creates Quite A Storm

I know, as corny as you get but couldn't resist it. Yesterday got a bit windy, as the forecasters predicted, and it caused chaos. Trains were cancelled in advance, speed limits set, and many, many trees decided to lay down on the tracks. Plastic sheeting around the country took a holiday on overhead lines, and a garden shed was deposited on the tracks. Locally the Orwell Bridge was closed early morning, which resulted in Ipswich being gridlocked all day. Yes I know Ipswich is always gridlocked all day but this was worse than normal!

Sanders, Coach Services and Konect were withdrawing double deckers from service, and Konect deemed the Acle Straight too dangerous for buses and diverted the 7 via Filby. However only one major incident was reported, that being an X1 travelling between Peterborough and Wisbech, which as caught by a particularly strong gust of wind and ended up on its side in a field. Thankfully there were no serious injuries and the driver was unhurt.  The vehicle involved was 33808 YX63 LJO. Being an E400 there are rumours that the damage caused has improved its looks and increased its value by around £25,000. This is one of the pictures tweeted by the police, but for many more photos and detailed report head over to the X1 Blog by clicking here. 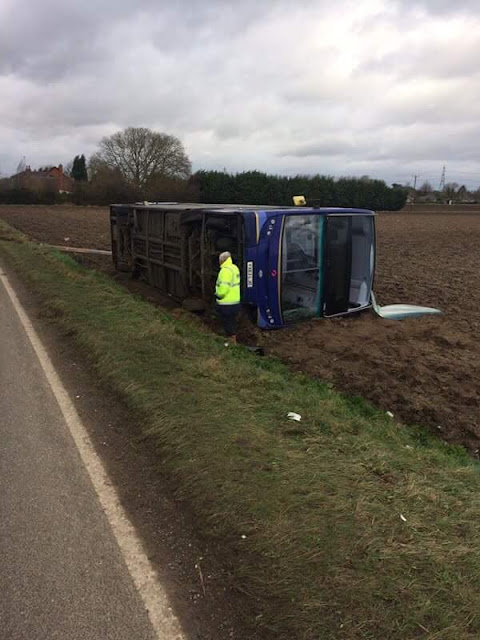 Adversity brings the best out of people, and while I was sheltering in my hovel monitoring the chaos it was heartwarming to see operators accepting everyone else's tickets on competing routes to ensure everyone got home. However it wasn't just competitors co-operating together. I also saw on Gerard's X1 blog a photo of Julian Patterson's Leyland National, looking great in its new Lynx livery (formerly Konect) operating a journey on the X1 from Kings Lynn to Swaffham. Absolutely superb and I would have got pretty excited had I been one of the lucky passengers. Julian has kindly agreed to let me publish the photo here, and I'm also grateful to Sam for being the messenger.

Something that makes us Brits pretty unique is our use of humour to relieve stress. This was demonstrated at an unknown Underground Station today with this inventive notice which I hope brought a smile to the suffering travellers.

The Class 37 short set was employed on the main line yesterday between Norwich and Colchester after power supply probs at Diss, which again must have been, and indeed sounded good. As I type everything is just about back to normal so well done to all those who had to deal with exceptional circumstances yesterday, keeping the public informed and moving, and repairing and clearing infrastructure. Let's hope that's it for the Winter storms and we can look forward to Spring.
Posted by Steve W at 22:56