Imagine, if you will, that you want to buy a new car. Unless you know exactly what you want there's a fair chance you'll shop around, see what deals are being offered, and take a few out for a test drive. In that case you would reasonably expect the car you tested to be the latest one, with all the up to date gadgets, fuel economy, engine, gearbox etc etc. If you got a car to test drive that was 5 and a half years old no doubt you would raise your eyebrows.

So when a kind soul told me he had seen a 61 plate Volvo B5LH Gemini 3 heading into Borderbus I was slightly confused. As far as I knew there were no plans to buy one, and surely it couldn't be a demonstrator on a 61 plate unless it was a cherished registration. I wasn't even aware Gemini 3's were around in 2011, and it turns out they weren't, being launched in 2013, so this bus is an enigma - was it a prototype, or is it not as old as I'm led to believe! I'm sure someone out there will know.

Anyway it turns out to be a demonstrator. Trouble is it's not an up to date demonstrator. I have been on later examples which have a much faster electric to diesel transition, and a gearbox that doesn't sound like a semi auto. So it can only be called a demonstrator of a second hand bus!

I'm not a huge fan of the Gemini 3. I don't think they are a patch on the Gemini 1 in terms of comfort and ride quality so I'm pleased to be proved wrong on this occasion. No rattles, quiet, good suspension, no noisy air chill system and it felt solid. Fast away off the mark, smooth braking even with Dave driving and I thoroughly enjoyed the journey. The seats, although a hideous colour were deceptively comfortable too.

And now I'm struggling. With most demonstrators you are looking for new features, improvements, innovation, but this isn't a new bus - there is nothing about it that hasn't been written already. It has the same gearbox as the single deck Volvo 7600 which I personally can't stand and I've found later models better, if more rattly. In short I saw nothing to make me think it was better than the B9tl on a Gemini 1 body which led to a discussion with my good friend Dave Marshall, Chief Engineer at Borderbus.

Being a top engineer Dave is always thinking about fuel economy, how it drives and everything that is involved with putting it on the road for the passenger. That is right and I would expect nothing less. However, I am that passenger. If you want to read all the technical info then most of the magazines go into it in great detail. But the bums the operators want on their seats couldn't give a hoot about fuel economy, or the type of gearbox, of if the brakes return power to the batteries etc. All they are interested in is firstly reliability of the service, then value for money, then comfort. A friendly driver also helps. That is where I come in and I will maintain until I'm blue in the face that from a comfort and ride quality perspective over the last decade there has been a decline in quality not an increase.

The demand for smaller engines, which in turn has led to a demand for less weight for those smaller engines to drive around has resulted in passenger comfort being sacrificed. Oh yes high back leather seats are the norm now but suspension isn't. Why is it whenever I get on a bus with traditional bus seats they feel better? Why do buses rattle more now than they did 20 years ago? That's not progress. I'm the first to complain about loud headphones on buses but if they can't hear the music over rattles and noisy unnecessary air chill systems than who can blame them. I shouldn't be delighted, as I was on Wednesday because I had something nice to write about a bus. That should be the norm not the exception.

So back to my discussion with Dave. When Arriva in Maidstone got their B5LH's in 2013/14 I asked my man down there if the extra cost of the hybrids was offset by the savings in fuel. He said  that over an expected shelf life of 15 years they would break even, and admitted that it was really just an excuse to say you'd gone green. I would suggest buses in Maidstone have to stop a whole lot more than buses on the 146 between Southwold and Norwich so the cost of the bus would in all probability not make it financially viable. However, I have no idea if the hybrids hold that premium second hand. If not then then fuel savings could well come into play, but at the same time there is more to go wrong on a hybrid and without warranty you are taking a bit of a gamble. It will be interesting to find out, but all that being said I'd take the B5LH over just about anything else out there at the moment, but think I'd request everything be put in a Gemini 1 body. Oh, and no green seats!

Borderbus have the B5LH on loan until the end of next week and I'd recommend a ride on it, if only because it's the only hybrid in Suffolk or Norfolk to my knowledge, unless I'm forgetting something obvious!

Since posting I have been contacted by Andrew Pursey at Borderbus, with the following clarification.

The bus we have is one of 3 hybrid's that Volvo have for sale.

As they don't have a demo vehicle as such, they kindly lent me one of their sales vehicles.

As David has already mentioned, fuel economy is one of the main things we are looking for when trailing potential purchases.

Do we keep an older bus doing 5mpg or
Do we but a new bus that does 10mpg or
Do we find something in the middle?

Many thanks, Andrew for clearing things up - it's a loan not a demonstrator!

I have also been contacted by Richard Mann, Area Sales Manager for Volvo Coach Sales, who also clarified things:

Volvo have over 1000 hybrids on the road in UK and as established product we don't have a demonstrator unfortunately, as I agree that a brand new vehicle would be better.

Great to hear from you, Richard, and it does rather back me up that as an established bus it was tough to write a review on! Richard is also going to investigate why a 61 registration is on a body that wasn't launched until 2013! I get great pleasure when the industry takes the time to clarify things I have written - always a privilege to talk to them and worth being wrong sometimes! 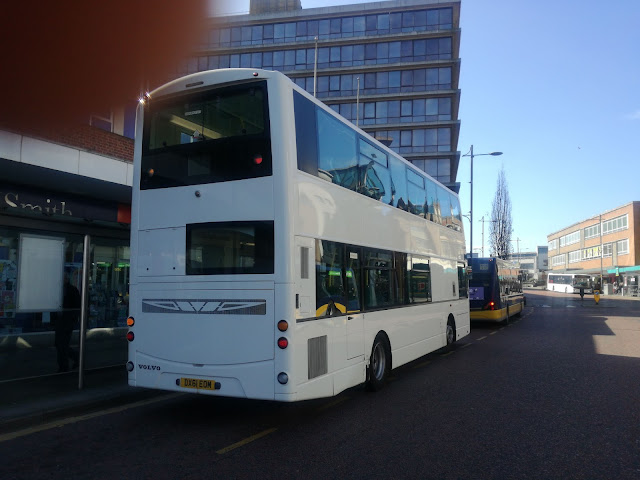