Due to an abject lack of news at the moment, n which subject look for a new post in the next couple of days, here is a post I've been saving up. Cast your mind back to August Bank Holiday, which was a very warm, sunny if windy day. It also saw Class A1 Pacific 60163 Tornado come to East Anglia on a charter to Great Yarmouth from London. Huge crowds were expected to see one of the newest locos around - Tornado was only built in 2008 - and finding locations for unique pictures was going to be difficult.

However, Tim and I hatched a plan and ventured to a station only reachable by train or boat, and police car as it turned out - Berney Arms. It also took an experienced rail journey planner to realise the only way back to Yarmouth from Berney Arms was via Brundall, so we were fairly confident there wouldn't be many joining us. But I wanted to see Tornado is more than one location, so before meeting up with Tim in Yarmouth, I went to my secret location in Norwich where with just a couple of fishermen for company I waited for Tornado to appear. Lovely scene.

I had hoped to beat Tornado to the Acle Straight but alas hot bank Holidays, great Yamouth and traffic don't make a great combination, and steam beat petrol quite comfortably. So I joined the merry throng at Yarmouth and watched the shunting movements involving a rather smart DB Schenker Class 66 as Tornado was reversed back to Norwich to turn round. 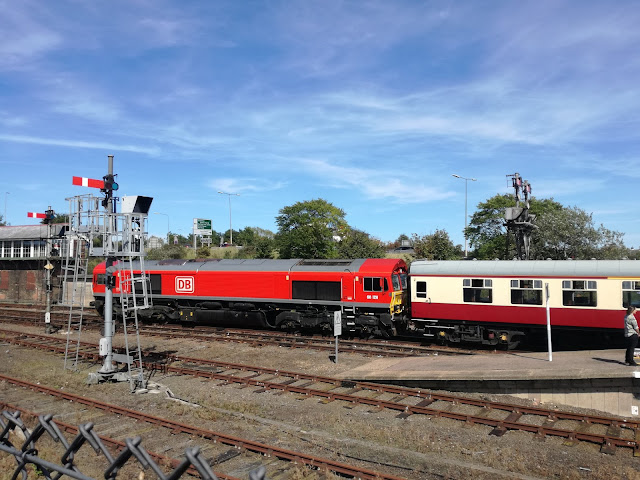 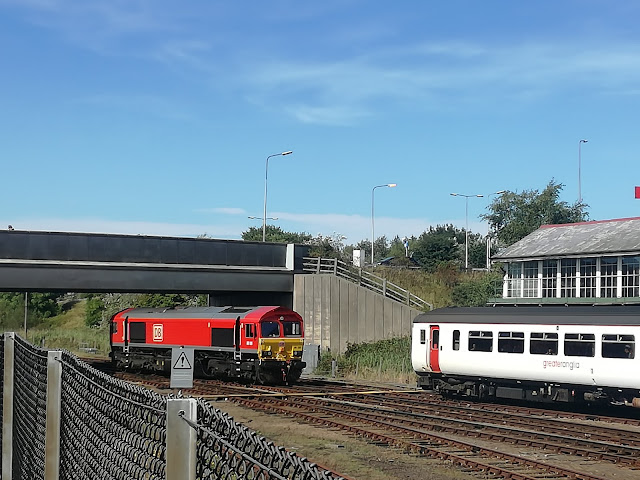 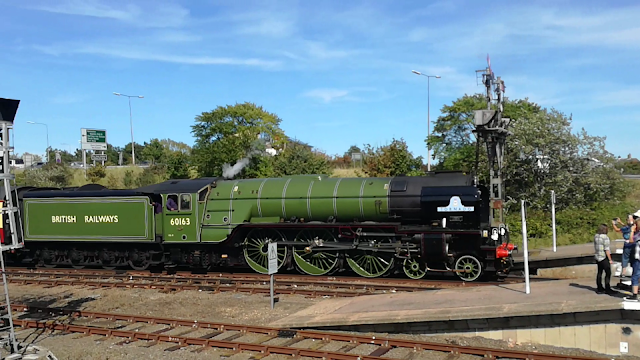 After the hordes had gone and just the Mark I's remained while the two locos played musical tracks at Norwich, Tim and I waited for our train to Berney Arms. Before it arrived, though, the familiar growl of the Class 37 short set was heard, and it set up one of those photos tat just looks timeless in back & white.

A short ride on one of the tastefully refurbished 170's later and we alighted through the designated door at Berney Arms, my first visit there. The words "middle of nowhere" are overused, but wholly appropriate in this case. I've been to Dovey Junction in North Wales which is also inaccessible by road, but at least that has mountains. Berney Arms has nothing!

We weren't alone, 3 others had also got off but I wanted a location where we could see the trains long distance and get the station in view, and a field opposite the station ticked all the boxes. The theory was soon put to the test as the 37's passed through on teir way back to Norwich.

As you can imagine at such a popular bustling location security was high. A Police helicopter was spotted, and ten the amusing sight of a BTP car dodging the cow pats and ditches to make sure no riot was taking place at one of Britain's remotest stations! And even then they only spoke to the people on the station, not Tim and I standing in a cow field!

One quirk about Berney Arms is the amount of information there - I know far bigger stations with far less information. Fair play to whoever looks after the station.

And then Tornado came through, firstly being reversed back to Yarmouth, pulled by the 66, and then spectacularly with the full rake of 12 coaches.

Sadly the stills from the video haven't turned out great, but you can see all the videos from the day below. Thanks to Tim for the company, and to the brilliant people behind Tornado for making her visit possible. Her older sister, or should that be brother Flying Scotsman is coming later this month and we'll be out trying to avoid the crowds for that too.