Reading Between The Greenlines Part One

What were you doing at 4am Sunday morning? If you had any sense you were in bed. I was in the car driving to Upminster to start the first epic day of the year. I hadn't planned to - the weather forecast was truly awful and the day had been marked as a strictly TV sport day. Then I found out that Reading Buses had secured the 10,000th ADL bus to be built - a high spec E400 MMC, which apparently was given the full treatment and was a must to travel on. Since Reading only had it for a few days, and were using it on the Greenline 702 between London and Bracknell, Sunday was the only day I could make it down there. So I found myself at Upminster station at a silly time waiting for the first C2C service to Fenchurch St - a first for me and the only London rail terminus that had somehow avoided me over the years. It was 15 mins late due to overrunning engineering works but hey ho, it was warm and smooth when it turned up.

A short walk to Tower Hill Underground station, District Line to Victoria, a stroll through Victoria Place and I was at the lesser known of the 4 Victoria Bus/Coach stations (There are 2 separate coach stations for arrivals and departures) where the 0800 702 to Bracknell was sitting on layover. The CEO of Reading Buses, Martijn Gilbert, of whom much more later, had kindly told me what the MMC's were doing (the Scania MMC demonstrator was also on loan), but I also knew the very rare Scania Iriza i13 single decker was on the route, and to my delight was operating the 0800. Normally confined to contract work in Newbury it is a blue moon to see it in general passenger work and I had been told they were pretty good.

Unfortunately the destination display hadn't agreed to Sunday working, although it did subsequently reluctantly settle on a late start, but my first impressions were the Iriza is a nice place to be. Decent seats, nice interior, and theatre style tiered seating towards the rear, which wno't be to everyone's taste but does help with forward vision. 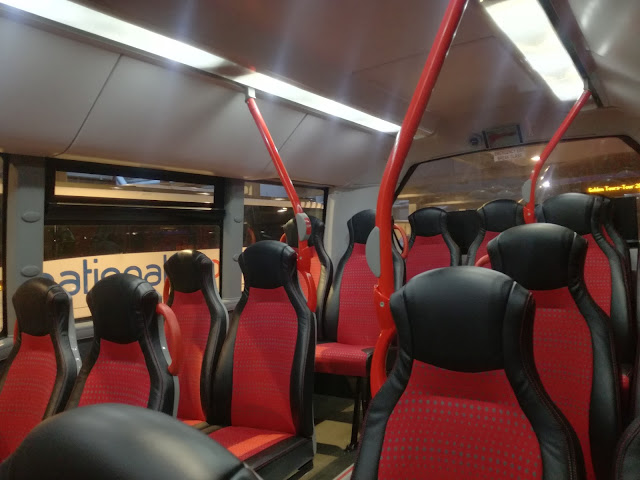 Long time readers of the blog will know, despite derision from parts of Kent, that I regard the best single deck bus ever built to be the MAN Ecocity gas bus. It has set the bar very very high. Could the Iriza match it? Well sadly not quite. Don't get me wrong it is a lovely bus, certainly up there with high spec Citaros and better than anything the big boys at Wright and ADL have to offer, but a bit noisier than the MANs, and a little more body noise than I was hoping for. However, to anyone who didn't travel on the MANs before Go Ahead wrecked them I can fully understand why they are claiming first prize for this Scania. I would never complain if it turned up, and indeed I organised what I thought would be my return trip from Bracknell to get another ride on it.

A couple of boomerang journeys to Slough beckoned before getting ADL 10,000 to Bracknell. Reading buses have taken a two Stagecoach Scotland tri axle Scania Omnilinks on loan for the 702 and they look rather good it must be said. Fitted with Stagecoach Gold seats and superb heating which was necessary as it was snowing very hard these are really nice buses Yes they rattle a bit but then they are 10 years old so allowed a bit of leeway there. A very nice, if short trip to Slough.

I returned to Windsor on the Scania E400MMC demonstrator that First had on trial on the X1 last year, and I knew I wouldn't like it. I didn't. Noisy, rattly and cold. Very cold. Enough said.

Back to Slough on the other Omnilink, which was even nicer than the first. Made a mental note to do the whole trip on one of these before they are replaced.

Back to Slough Bus Station to wait for the whole reason to be there, the 10,000th bus built by ADL. Even in the gloom and grey it looks very impressive from the outside.

Inside there are nice looking seats that have no foam but some new fangled material that makes them lighter. It also makes them less comfortable than the Irizar or Omnilinks, but still more confortable than the new train seats the DfT expects us to sit on. USB chargers, seat tables, coat hooks and even phone holders are present, because we all know how tiresome it is to hold your own phone while on a bus. Glazed panels line the roof, which when it's raining heavily sounds like you're in a greenhouse, and when the sun beats down on them will undoubtedly make it feel like one too. And being ADL it comes with creaks and body noise that just shouldn't be present on a brand new bus, not to mention hard suspension, and this is one they are showing off round the country all year! Was it better than an Olympian? No. Was it better than the Astromega I rode the route on 4 weeks previously? Erm no, it just wasn't! Oh I expect fuel economy and emissions are better but ask passengers if they take that into consideration before leaving the car at home. Yet again I left an ADL bus feeling cheated as it could, and should be so much better.

What did strike me throughout the day, though, was that every single bus on the 702 was on time, the drivers were friendly. and handled the appalling conditions with professional competence. The weather undoubtedly kept a few people indoors but that made it more spacious on the buses which was good for evaluation purposes.

At Bracknell the snow had turned to heavy rain and it was a quick transfer onto my next bus, the X4 to Reading, on one of Reading Buses' Lion Route branded 11 plate E400 Hybrids. Except these are hybrids the like I haven't travelled on. No gimmicky electric engine taking you to 10mph before waiting a month for the diesel engine to kick in. Oh no, these keep the diesel engine running to power the generator and the buses simply fly! The acceleration on them is astonishing for an E400 and they sound completely different too. Oh and no rattles, thanks to the dedication and diligence of John Bickerton and his team at Reading Buses, who sing from very much the same hymn sheet as myself when it comes to rattles. There will be far more of this in Part Two, when I report on my evening spent with Martijn Gilbert, and the highly impressive ethics he follows which has made Reading Buses one of the most respected operators in the country.


I was in Reading to sample the new Scania E400citi gas double deckers, and Part Two will start with that. Although I had been on the go over 10 hours the best was yet to come!