A Southeastern Super Saturday Part One

Those of you of a certain vintage will remember when the Network Southeast area was created in the late 80's, there were a number of Saturdays designated Network Days, where, for a fiver I think it was, you could ride unlimited in the NSE area all day. I remember walking up the entire length of a 12 car Waterloo - Portsmouth service, a 12 CIG, and there was not a single seat available. Those Network Days were hugely popular yet have never been repeated, mainly due to the splitting up of the network. Yes, various operators have rover tickets, but as a rule these have relatively small areas or a limited Network. A national rail rover does exist, but a 7 day rover will set you back £510, so in reality you're probably better off booking everything in advance if you know what you are doing.

So when Southeastern announced, with only 7 days notice, that they were doing their Supersaturday ticket, which gave unlimited travel on Southeastern services, including HS1 for £20 I started salivating at the prospect. Not only that but they set a challenge to see who could cover the entire network in a day. Red rag to a bull that. Hence most of the week was spent poring over timetables, getting frustrated with nonsensical connections, and a lot of shredded itineraries. The conclusion was finally reached that to cover everywhere in one day was impossible, so I dispensed with the Tonbridge - Hastings branch, which was the most time consuming, and concentrated on getting round everywhere else, which isn't as easy as it seems, as a fair bit of doubling back is required. So itinerary finally worked out, submitted to Southeastern, a reliable car borrowed, and at precisely 0307 I left my Suffolk village for Greenhithe in Kent, where I had decided to start and finish my day. Just a word about the disappointing quality of many of the photos. It was a miserable day weather wise, and my camera is not good at taking moving images in the dark, so apologies for the blurriness in some.


Having grown up on the Southeastern network it was like turning the clock back 40 odd years, except the trains were different. None of my beloved slam door trains now, but Networkers, Electrostars and Javelins covering areas some of which haven't changed in half a century, and others totally unrecognisible. Here is the network. 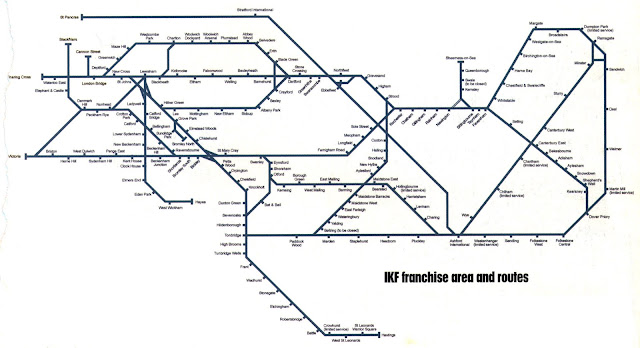 The Isle of Sheppey has never been a favourite place of mine. I'm told whenever we went there when I was young I would sprout horns and turn into the devil child, which I didn't do anywhere else, and I've never really felt comfortable when there, for reasons I'll probably never know. It's not what you'd call exotic either, making Lowestoft look like Monte Carlo, but had to be done, so now with the weather really closing in my little 466 took me on a rather uninspiring trip to Sheerness and back, including a Conductor who seemed as enthusiastic to be there as I was.
Now I should point out that despite the criticisms of the trains, and dislike for Sheerness, I was really enjoying myself. Everything was on time, the Twitter banter with the guys at Southeastern was good, as was watching other people's progress round the network. It was so good seeing old places and areas from my past again, and it was only 1710. I'd been on trains nearly 12 hours but still had another 7 1/2 hours to go! Part Two coming soon.
Posted by Steve W at 18:10