I'm sure everyone has a few dates during the year they look forward to. Could be anything from a birthday, to Wimbledon, to Trooping the Colour, to First Night of the Proms, to the new fishing season starting. For me, December 1st 2018 had been top of my "looking forward to" list since December 2nd 2017 when I attended my first Ensignbus Running Day. I had basically ordered Tim to keep the day free so he could come too as I wanted to share the experience.

You see there are Running Days and Running Days. There are Running Days which involve a 10 min trip round an industrial estate or big field when you don't know what's going to be doing what or when, and there's this Running Day. 3 routes, 2 of which are roughly 3 hour round trips, the other one being nearly 2 hours. Not only that but you know what vehicle is going to be on which run so you can tailor the day to your own needs. Buses running from 0900 - 1930 and it costs a tenner. Add to that it's becoming the bus social event of the year too, and you have the recipe for a perfect day.

So at precisely 0533 we set off from Blog HQ for the drive down to Purfleet. Although the weather forecast wasn't great there was still an air of anticipation of what was to come, which only heightened when we arrived at Ensignbus' depot in time to see all the stars of the show still tucked up but blinded up ready before action. Despite the now falling rain the atmosphere in the depot was one of excitement and cheerfulness, and we couldn't wait for the day to get going. 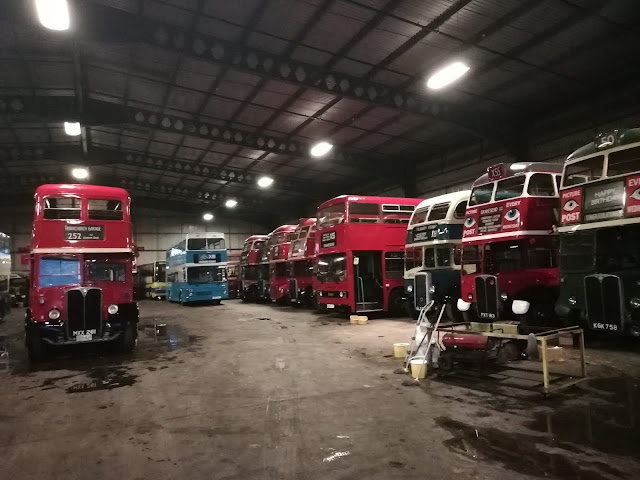 I had decided that if nothing else happened, Tim was going to get the "RT driven by a Newman" experience, plus I wanted him to see RT8, with all its wartime décor. Ross Newman was only taking it out for one trip so that was the obvious first choice. Empty to Upminster then the X55 to Gravesend via Lakeside, Dartford Crossing and Bluewater. Rain shelters really don't come much better, and when the conductor is a self confessed blog reader it makes it even better - great to meet you, Bob!
Ross didn't let us down - 2 hours of brilliant driving and my that old girl is in incredible condition for her age - the RT that is, not Ross! We left her in Gravesend town centre for a pit stop before our second bus of the day, with a VIP driver.

One of the people I wanted to see during the day was Martijn Gilbert, former Reading Buses supremo, now MD at Go North East. It was Martijn's birthday, and one of his regular birthday treats is to drive on the Running Day. You may remember last year he broke the DMS, which has supplied a year of constant mickey taking. I'm pleased to report he survived the day intact, and his first bus was the Southend Transport Leyland Fleetline. A new bus for me, and a type of bus familiar to my youth.

One of the real joys I've gained from this blog is the people I've got to know, and it seemed totally appropriate that on Martijn's bus I should meet Tom Bowell for the first time. Tom and I have been communicating on Twitter for some time now, not always in complete concordance, but after Martijn introduced us at Bluewater we clicked. Tom is a young man with a great future in whatever he chooses to do. Heavily involved in politics in his native Croydon area, Tom is also passionate about buses and public transport in general, and has recently written articles for local media regarding proposed TfL alterations to bus services in his area. I could have chatted to Tom and his two companions all day, but there were other things to do, so we left them at Upminster as a rather special guest was soon to arrive.

Buses are sometimes like buses - you wait 35 years to go on one then you get it twice in a month. This was the case with Seaford & District's ex Maidstone & District Leyland Leopard 2816. I won't go on too much about it as I did that when I travelled on it a few weeks back on Tube Strike day. Suffice to say she looked great, sounded great and the journey to Ongar on the X21 was made even better by chatting to Alisha, a young lady who is simply the Google of London buses. Female enthusiasts are rare, but Alisha makes up for that. Her knowledge of the London scene is unrivalled, and I'm busy trying to persuade her to write a regular article on the London scene for us. So good to see you again, Alisha, and I will keep nagging.

We left the Leopard at Brentwood High St to catch the third of the three routes, the X81 to Tilbury. At this point we had no idea what bus we would be getting, basically the first one to turn up, so when I checked only to discover it would be a certain Metropolitan Scania we knew the bus Gods were smiling on us. Again, I'd only been on her a few weeks ago, but that is one bus I would travel on day in, day out with no complaints and never getting bored. So ahead of its time, giving a ride modern manufacturers must be jealous of, I reached the conclusion that MD60 is my favourite bus in the country. Beautifully cared for by Paul, who it's always great to see, I get a thrill from riding that bus that I get from no other, and there's plenty of competition! At Tilbury I got what I think is my photo of the day.

Despite growing up in North Kent I had never been on the Gravesend - Tilbury ferry. Never even crossed my mind and I'm kicking myself. What a useful connection and I will be back. Unfortunately it was too dark to get a decent photo by time Tim and I were there as the lighting both sides was minimal to say the least!

Back in Gravesend we had a choice. I wanted to get RT3251 driven by the Father of the bus industry, Peter Newman, before meeting up again with Martijn for the journey back to the depot, but another surprise was in store first. Again, totally unplanned by us, the ex Southend Transport Astromega arrived, looking superb, and driven by another guest driver, the MD of Lothian Buses, Richard Hall. It was after sinking into those sumptuous seats and taking in the heat, that we realised we were going to get an unexpected bonus. Gravesend High St has long been popular for its Christmas lights - it's where Dad always took us when I was a boy - and now pedestrianised apart from buses, the perfect photo opportunity was given to us. I thought I got some good ones but Tim took the prize with this stunner that would grace any Christmas card.

We stayed with the now rather late running Astromega to Bluewater, and 5 minutes later Peter Newman arrived on his beloved RT3251. I was delighted to see last year's conductor with him, and I made sure Tim was in prime position for the journey through the Dartford Tunnel on an RT, which is an experience everyone should have at least once in their lifetime!

Peter, who I'm convinced becomes 10 years old again when he's driving that RT, gave an exhilarating ride, and it was with reluctance we left him at Upminster, as the ride back to the depot would have been something else.

However, there was one last treat, and something completely different. I well remember the Duple Laser bodied Leyland Tigers of the early 1980's. Absolute beasts of their time, and I loved them. So did Martijn Gilbert, who used to travel on them as a boy, and  had reverted to 10 years old himself when given the opportunity to drive one of the very coaches of his boyhood. The Southend Transport Tiger was lovely, Martijn was clearly in clover, and apart from anything else it gave me half hour with one of the most respected bus mangers in the country, an opportunity that doesn't come around that often, especially with him now based in Newcastle! It put the icing on the cake of a day that left me with not much voice left, but totally fulfilled.

One sad thing to note - a few mins after we got off the Leyland Leopard a stone flew up and smashed the offside windscreen. Thankfully there were no reported injuries. Such a shame, and I hope a new one is sourced soon as there can't be too many 1968 Leyland Leopard windscreens sitting on shelves.

I have only covered what Tim and I did. There was so much more, and so many more vehicles. If anyone wants to send in their pics of the day so I can do a supplementary post that would be great.

My thanks to so many people - Ross, Steve, Peter and especially Paul Dickson at Ensign for once again making me feel part of the Ensign family, to Tom, Alisha and numerous others from all areas of the industry I met on the day, to Martijn for being just a nice guy, and to Tim, for not taking offence when I frequently deserted him to talk to others! Roll on December 7th (I presume) 2019!

Tim wanted to say a few words so I'll leave the rest to him. I'm hoping to do a lot more with Ensign over the coming months, including their own bus operations so watch this space.


Hello It's me! I will admit it was an early start from mine and rather late when I got back to bed but it was worth it. The sheer scale of the operation was a thing to see and enjoy, plus the spectacle of that first bus to Upminster which was totally packed 30 seconds after arriving. I saw so many people hopping on and off just to get the bus they wanted for a tick in the book, and to be honest I was bowled over by the sheer numbers of enthusiasts that had turned up. Martijn was over the moon that a man from Newcastle had travelled all that way and was on his bus too! I also freely admit as much as I like the old buses I do have soft spots for the Astromega and the Tiger which I was very happy to get 2 good runs on.

I really felt welcome too, it was such a friendly, happy day that was my first and hopefully not my last. Thanks for the invite Steve and here's to next year!!
Posted by Steve W at 19:56