The Future Of Rural PublicTransport Is......

Autonomous pods, apparently.  Yes, I was surprised too, but that's what we were told at a consultation meeting today in Beccles, where representatives from Suffolk County Council's Public Transport team came to meet with the peasants of the land to discuss the future of Rural Public Transport.

Delegates present included yours truly, the Mayor of Bungay, and a lady who confessed to not having used public transport for over 50 years. I don't think she was a Go Ahead director.... There were also people from Snape and Mutford, who like my village have no bus service at all, were looking for answers and a glimmer of hope. Joining the Council team were managers from BACT and CATS, who provide the Connecting Communities minibuses and Dial-a Ride services in the area.

We were first asked, rather optimistically I thought, to say what we thought was working well in respects to rural transport. The unanimous consensus was currently nothing is working well so we quickly moved on to what improvements could be made. Various suggestions were made, but it all boiled down to one thing - reliability and accessibility, and by that I don't mean can you get a wheelchair on, which is law now anyway, but you must be able to get a bus to go where you want at regular times you can work round. Like normal buses in fact. Having to book in advance rules out spontaneous travel, and not being guaranteed your preferred time slot means it is completely unreliable, so unless you have the flexibility of a gymnast it is beyond useless.

That triggered the expected "we haven't got any money" excuses, which I'd fully anticipated. Of course if the service was better more people would use it, revenue would increase, and so the service could improve even further. But it was here the chicken and the egg problem surfaced, not for the first time. That being no one will use a poor service until it improves, and no one will improve a service that no one is using. Catch 22. So how do you break the cycle? Well, if you have read the last couple of posts you'll understand why I wanted a brick wall to reshape my head against. How about Councils, communities and operators working together to create demand and supplying the demand which has been researched so communities get the bus they want and operators get the passengers they want. No! Seriously? Why hasn't anyone thought of that before!!! Trouble is the operators won't finance that research - I discovered that rather painfully a couple of weeks ago. The Council certainly won't, and the communities, quite understandably, won't believe they can achieve anything if the Council and operators appear disinterested.

So having ascertained what needed to be done, but unspoken acknowledgement that no one wants to do it, we then got a fascinating presentation on the future of transport, or rather a lot of things that are happening elsewhere but are decades away from happening here. Electric buses - we haven't got so much as a hybrid in East Anglia - electric cars, and yes autonomous pods like they have in Milton Keynes and Heathrow Terminal 5. On top of E and M Tickets, contactless and bus tracking. At this point one of the gentlemen from Snape pointed out most of the area was yet to get a decent mobile phone signal, let alone think of autonomy. I know several people who have had problems getting a strong enough signal at bus strops to get M-Tickets to bring them up to show drivers, therefore having to pay again. I asked the guys from Snape to let me know when their pods arrived so I could do a write up on them. Might not be next week.

Can we please get the basics right first. There is no gimmick in existence that can make up for not having a bus in the first place. The Snape team said they were working within their community to get a regular band of passengers together to block book the Connecting Communities minibus. That's a great idea, and the sort of enthusiasm needed. Unfortunately if they did book the bus that means those who already regularly use it wouldn't be able to, and the manager of CATS conceded that point. So if one person travels it is at the expense of another. As business models go it's not going to win any awards. But use a bus that's resting between school runs to operate that journey for Snape, and suddenly everyone's a winner. I'm grateful to Anonymous who posted after my last post to tell us about what Dorset Councils have done - take a look. I read that post out, which shows if there is a will there is a way, and yes, communities WILL take responsibility for their own bus service if the support is there.

But if I'm brutally honest I can't see it happening here. It could, it really could, but no one is prepared to say, yes, we'll give that a go. I heard more than once the Council Reps responding to suggestions "how can that be financially viable?". When they said there would be a £700k shortfall in the transport budget over the next four years I suggested a £5 levy added to Council Tax, which would more than cover that shortfall. The argument that non bus users shouldn't have to pay for bus subsidies came up. My Council Tax pays for leisure centres that I don't use, and a whole ream of other services I could use but choose not to. Why shouldn't buses be added to that list? Then they would be there for people who did choose to use them. If you're paying £1200 a year in Council Tax another fiver isn't going to make much difference.

Concessionary passes were mentioned, with the vast majority agreeing that there should be some contribution from pass holders, either in paying a flat fare or an annual fee for the pass. Unfortunately that would require a change in legislation, which won't happen as it will be deemed a vote loser. Unless you're Suffolk County Council, that is, who have decided the best way to increase patronage of community buses is to cease accepting concessionary passes full stop. When asked why I was told that because some areas couldn't accept passes (no idea why) to make it fair for everyone no one would be able to use passes. I'm not sure if anyone suggested that passes be accepted everywhere, obviously that would be problematic. Of course it's perfectly fair that those without a regular bus service should have to pay when those who do, don't. Yes, that's fair.

I asked about the legality of that, since Connecting Communities is registered as a local bus service. However, and I was told this with a straight face, because they are bookable (they HAVE to be booked) that makes them the same as National Express so they don't have to accept passes. That's right, Mrs Miggins going from her tiny hamlet to get her hair done in Saxmundham is the same as Auntie Gladys getting the coach from London to Plymouth. Except Gladys knows when her coach will leave, when it will arrive, she will definitely be able to go when she wants and it will take 5 hours not 15 minutes. It seems lost on SCC that Connecting Communities is a substitute for a regular bus service, so these people have a double whammy - no regular bus, and now they have to pay for the privilege. That'll fire the enthusiasm up!

And that was it. A nice idea that gave no room for optimism. I'm not sure what SCC expected to gain from this, except to be seen consulting with the public, but when I got home I looked at the lovely bus stop across the road, and try as I might I couldn't envisage it being back in use anytime soon.

So, moving on, and a couple of weeks ago I went, with Roy from East Norfolk Bus Blog, to see Borderbus's latest Scania, and very smart it is too. Yesterday, Borderbus's Diplomatic Correspondent, Bernice Carver sent me a couple of pictures with the Scania sporting its new registration of BB61 BUS. That means the 6 Scania deckers carry the registrations BB53/6/7/8/9/61 BUS. BB58 being the only double door example. Many thanks, Bernie. 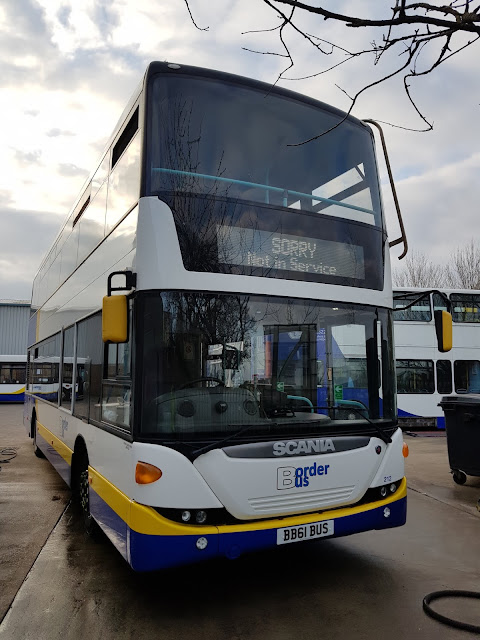 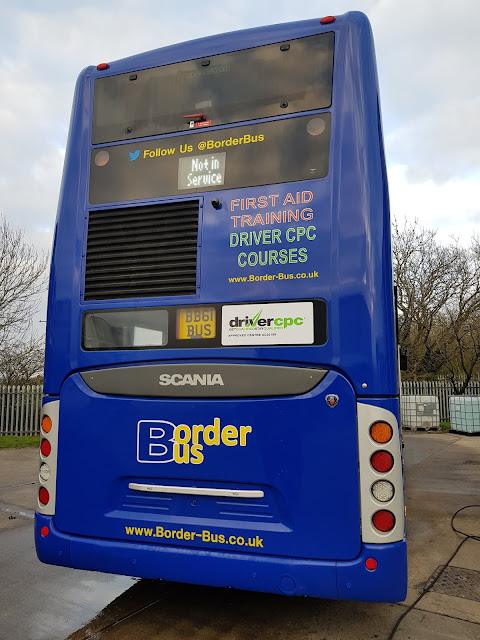 I was asked a serious question by an operator this afternoon - that question being is Contactless vitally important on rural services? I know what I think, but I'd be really interested in what everyone else thinks. Is it worth spending many thousands upgrading ticketing equipment to enable contactless payments? Let me know what you think.

Finally Go Ahead's figures for the last year have been published., including the final year of Anglian I will publish them below but make no comment, as they speak for themselves.


Finally finally it's always interesting when someone outside the area comes for a look at things. Roger French OBE, for 25 years MD at Go Ahead owned Brighton & Hove did just that last week, covering Colchester, Ipswich, Southwold and Norwich, with many places in between. He spends his, I presume, blissfully happy retirement touring the country, sampling bus and train services, and writing reviews. His speaking sand writing services are in high demand, and when Roger says something the industry normally jumps. You can read his interesting and forthright review by clicking here, and again I'll make no comment, except to say a lot of it is rather familar.
Posted by Steve W at 23:26