It's A Funny Old Game

I'm still undecided about social media, if it's a good or bad thing. It can showcase things that otherwise would go unnoticed, bring far flung friends together, illustrate selfless acts to rescue animals, or raise awareness of good causes. It can also have its unsavoury side, much like real life.

Today I've been called "sour", cynical", "childish", "unchristian",  "close minded", "bitter", invited to start saying thank you to waiting staff and my postman, and this has been made and supported by so called industry professionals, including some in high positions. And my crime? What did I do to provoke this catalogue of criticism and name calling?

Well, I was going through Twitter this morning, and I spotted a Tweet for the 4th day running from Network Rail, proclaiming the success of the recent closure of the Southend line. Overhead lines and gantries have been replaced, and the line was shut for 9 days to allow the works. It had been well publicised for months, and an informative video was posted, showing what had been done and what still needed to be done. All very good. However, and this is what caught my eye, it was the wording of the tweet... 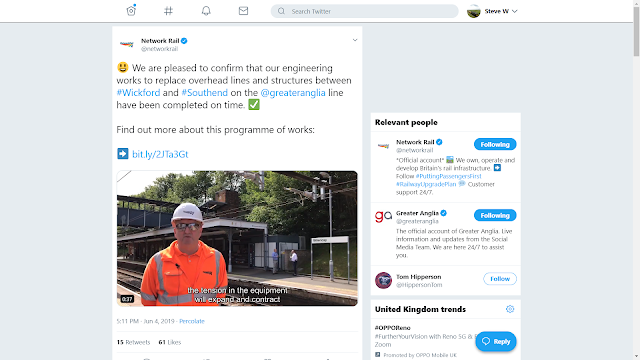 Hang on a sec - what was that - you're pleased to confirm you finished the job on time 4 days ago? Firstly I think everyone will have noticed trains are running again, and most importantly it's Network Rail's job to get the work done on time. That is why they are paid billions of taxpayers money every year. It struck me that I can't think of another profession (except sport) where people expect public praise for doing their job. Can you imagine Yorkshire miners in their heyday coming out of t'pit, and wanting a fanfare because they'd mined sufficient coal to justify their wages? Do Ambulance Trusts tweet everyday how many lives they save and how many were reached in the target time in order to get praise? My postman doesn't tweet every day that he successfully completed his round without putting any mail through the wrong letterbox. Of course not. It's their job, and they do it brilliantly, without seeking attention.

Now, don't get me wrong - it's vitally important that the travelling public, of which I'm one, is kept fully informed of engineering projects and their progress. We need to see where improvements are made and where the money goes, although that doesn't help when your train is delayed or diverted due to the ubiquitous signal and points failures that plague the system. So it's good PR, and shows what is done when lines are closed. But do you really have to proclaim that you've finished a job on time? Doesn't that just point out how often it doesn't?

So I tweeted the following. 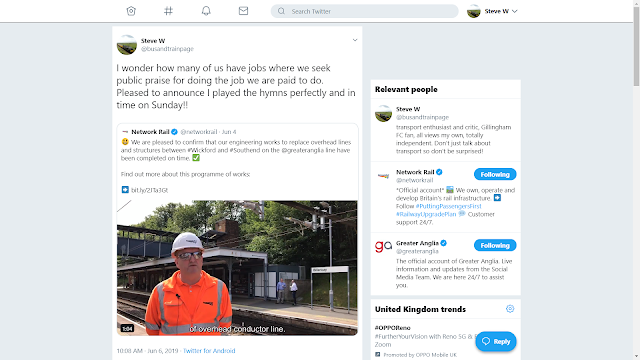 I did play the hymns perfectly too - and got praise for it, as I did the Beatles number I played after the service which linked in to the theme of the day. What I didn't get was praise for turning up on time or wearing appropriate attire, or not falling asleep in the sermon. Some things should be accepted as the norm, and finishing a job on time should be one of them, in my view. Imagine had Network Rail's tweet been worded thus:

"We are pleased to announce that the engineering works to replace overhead lines and structures has gone smoothly, and as a result passengers can now expect fewer disruption in adverse weather conditions - thank you for your patience while the works were carried out".

Anyhow, you'd have thought I'd said Network Rail were the Devil Incarnate from the response I got. Which proves a theory I've had for sometime, that the rail industry, from the Department of Transport, to Network Rail, to train operating companies, to the rail media are so out of touch with the travelling public it beggars belief. Why the hell should passengers on the Southend line be overjoyed engineering works finished on time 2 days previously when at the precise moment that tweet was posted on Tuesday there were no trains running on the line due to a points failure at Shenfield! They pay thousands a year for a service. They have a right to expect works to finish on time and every right to complain when they don't. Until such time as the industry grasps that simple fact, and puts the customer first, as some - but still too few - bus operators have realised (Harrogate Bus including the top banana were handing out free breakfasts on the 36 this morning) then passengers will not see many benefits.

The entire attitude of the railways needs to change - the "blame someone else" culture is at pandemic proportions, and self-congratulatory posts will do nothing to appease the customer. There are exceptions to that, but very few among the people with influence, and that affects the staff on the ground who do an exceptional job. I'm reminded of a quote from Blackadder Goes Forth when General Melchett tells the troops "Don't forget, Captain DArling and I are right behind you", to which Blackadder replies "About 35 miles behind you"! The rail staff on the ground must feel like that sometimes.

So to everyone who sank a lot lower than was really called for today, including some very surprising names I make this pledge. I will continue to side with the passenger as I am a passenger who just happens to know a bit more about how things operate than most. I will praise where its deserved, and I did that today too to Greater Anglia about their friendly staff, and for rescuing a family of swans off the line at Somerleyton. But I will also continue to comment about things that I think make the railway look stupid, and saying yippee we finished something on time is one of them. Not when the very people you are saying yippee to are stuck with no trains! If you don't like it stop following me - social media gives you that choice so use it. Then I can't upset you.