Around The World For 6 Miles

Yesterday, 7th September, Southeastern introduced more services to their post Covid-19 timetable. As I knew I was going to spend the week checking Mum's house hadn't fallen down (originally had a visit to see her booked but a positive test at her home put pay to that) and it being my old conducting ground I looked at what had changed. Quite a bit, as it happens, but my eye was attracted to something strange on the Chatham Main Line.

20 years ago it was simple - 2 fast trains from London Victoria to Faversham calling at Bromley South, the Medway Towns and Sittingbourne which split, the front half continuing to Ramsgate, the rear to Dover Priory, one semi fast an hour, one stopper. Running with them was a half hourly stopping service from Victoria to Faversham. It was a simple to follow system. Then, in 2010 HS1 opened to domestic trains and Southeastern were told in no uncertain terms to make sure passengers switched to it, paying the enhanced fares, as the line had to be paid for. That meant slowing down the fast trains on the Chatham and Tonbridge lines. The fast trains via Chatham now stopped at Newington or Teynham, and at Meopham and Longfield. The Faversham stoppers to London were reduced to one an hour and started and terminated at Gillingham. On the Tonbridge Line fast services between Ashford and Tonbridge were scrapped with all trains becoming stoppers. The message was obvious - if you want to get to London quick use HS1 but it will cost you.

However, if travelling from Victoria to Dover, if you caught the faster train it still wasn't bad - just over 90 mins for less in a more comfortable train. That has now been well and truly demolished, with both the "fast" and "stopping" services taking the same time to get from Victoria to Dover ie !h58m for the what used to be fast service, and 1h57m for what used to be the stopping service. The fastest HS1 journey from St Pancras to Dover takes !h02m. To achieve this Southeastern have introduced a what can only be described as a bizarre stopping pattern, especially between Rochester and Bromley South. Let's take a closer look.

During peak hours its very much as you were - semi fast trains stopping at Meopham, Longfield, Bromley S and Victoria. However, after 0930 something strange happens. The semi fast trains continue as normal but the stopping services OMIT Meopham and Longfield. 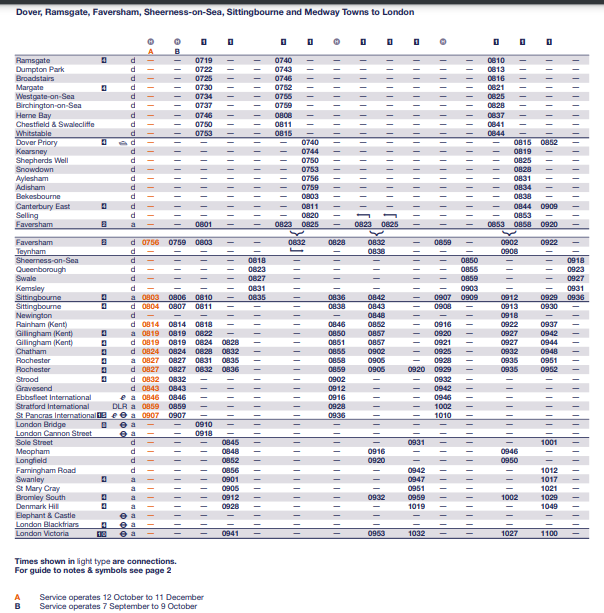 So that begged the question if you want to travel from Sole St, Farningham Rd, Swanley or St Mary Cray to Meopham and Longfield, and vice versa how do you do it? As Sole St is the nearest station on the Chatham Line to Mum's place I went out this morning to find out.
There's a lovely park near Sole St station which holds many happy memories for me, but it must be said the station wasn't at it's most lovely today. Lots of signs telling you to pay for your parking but no machine to pay at, the ticket machine was stuck on the final screen for the previous customer and the shelter strewn with rubbish. The timetable on display was also woefully out of date - indeed advertised trains stopping at Longfield that no longer did... 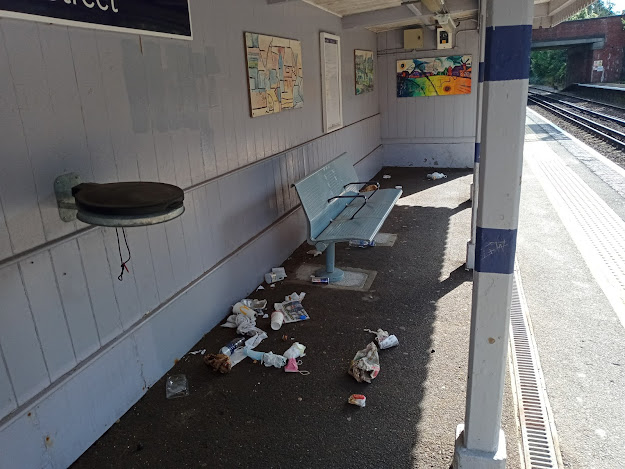 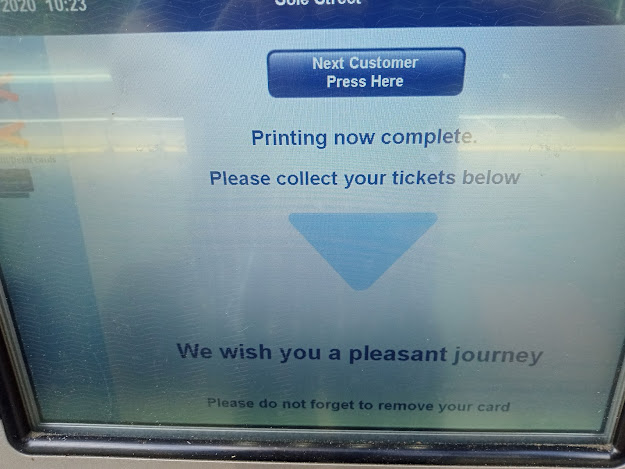 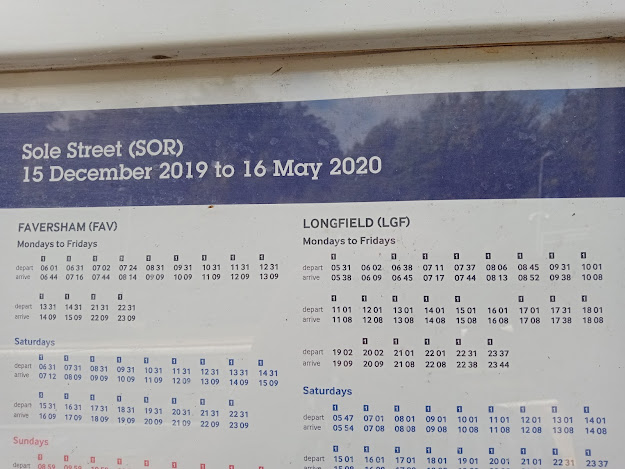 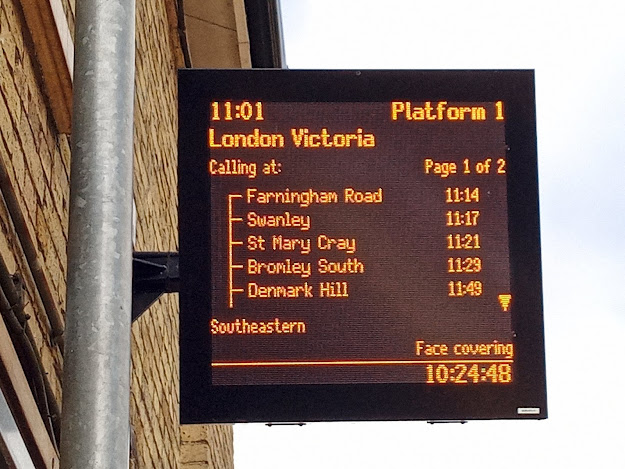 As you can see I had plenty of time to wait for the 1101 so decided to go the other way to Rochester, and double back to Longfield from there. Remember this should be a 7 minute journey! I caught the 1031 from Sole St to Rochester, which was a 6 car Class 465. At Rochester I was finally able to buy my ticket, and ask for a few clarifications. 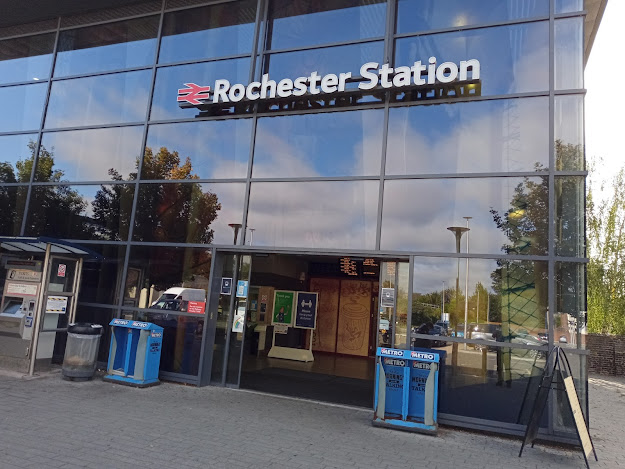 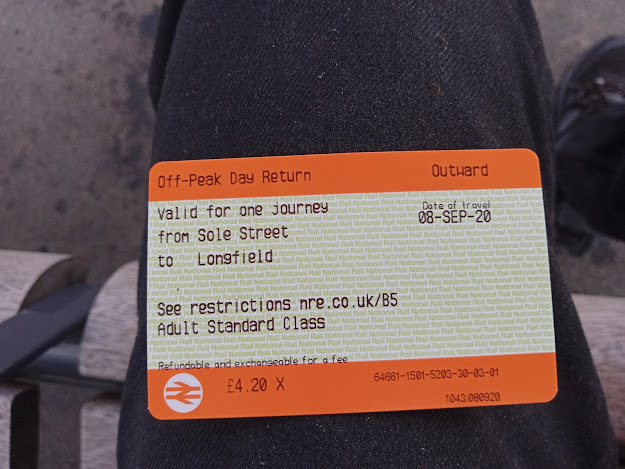 Take a note of the cost of the ticket - it becomes relevant later. I was pleasantly surprised that the ticket clerk was aware of the new stopping patterns and could answer my questions without doubting my sanity or honesty. I had 25 mins to wait at Rochester before the train to Longfield arrived. I still think the Southeastern Electrostars are the most comfortable on the network. 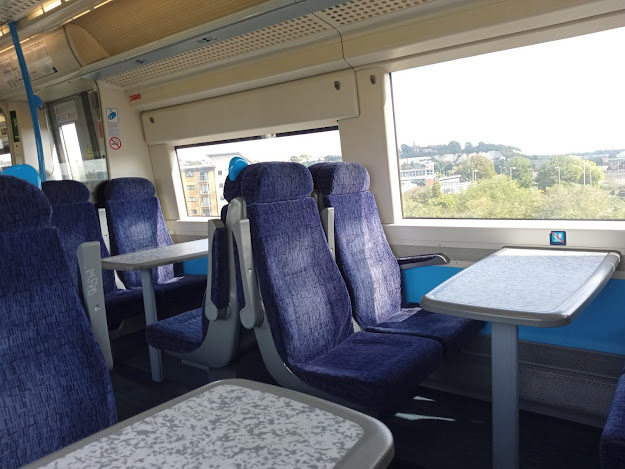 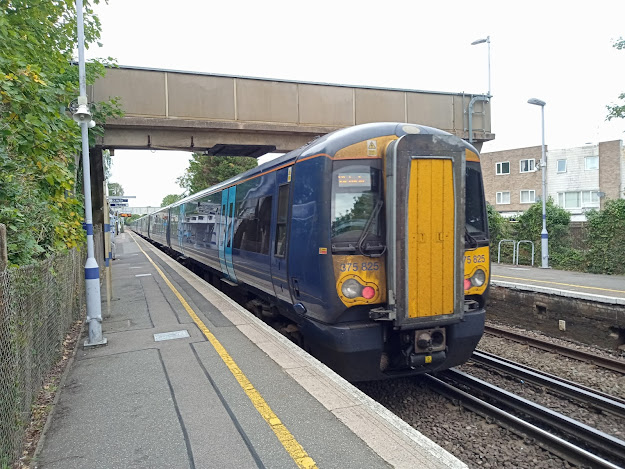 So I had arrived at Longfield. Immediately a train hurtled through - next stop Sole St, which was rather ironic. My outbound journey had taken 51 minutes instead of 7. 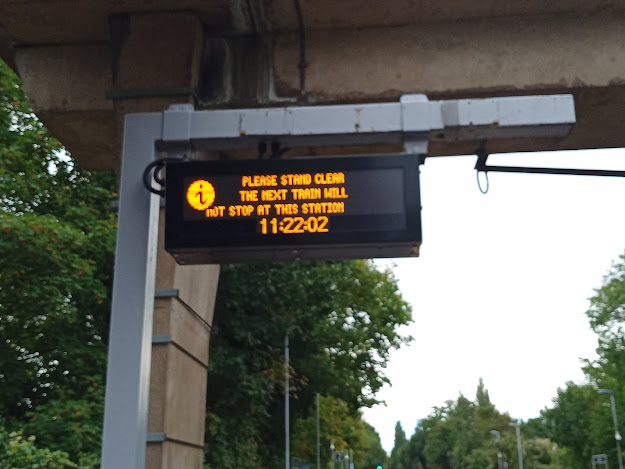 To be fair there isn't too much to catch the eye at Longfield, a parade of shops with a newsagent, cafe, fish & chip shop, hairdressers but also a Waitrose, which would be reason enough for those without a car in the likes of Sole St to want to go there. Buses go past the station, such as this rather smart Go-Coach Mercedes minibus, but there are no timetables - indeed the sign on the post directs you to the new Arriva app, which has come in for a great panning this week, not least from Roger French, busandtrainuser, who absolutely slated it! 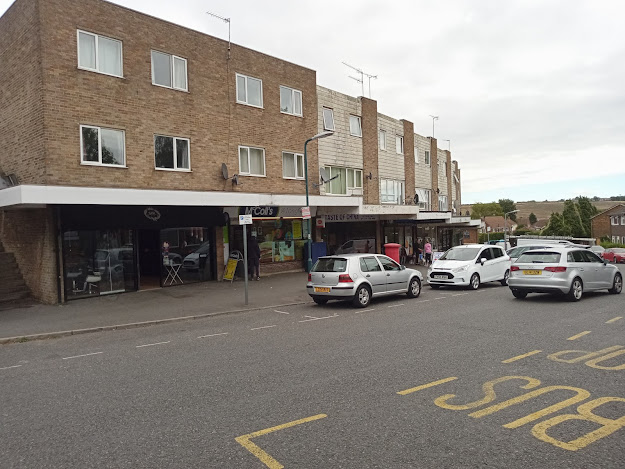 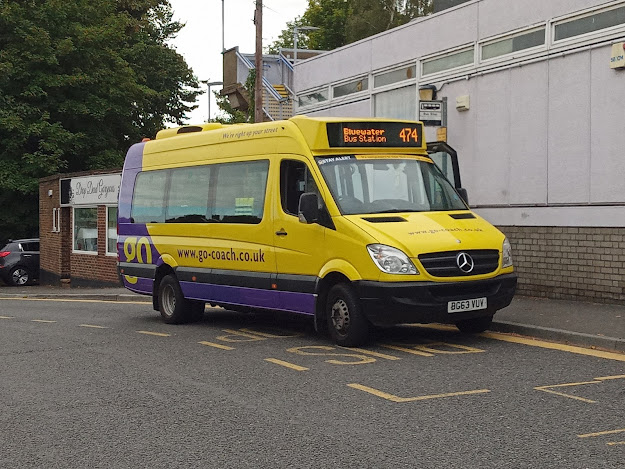 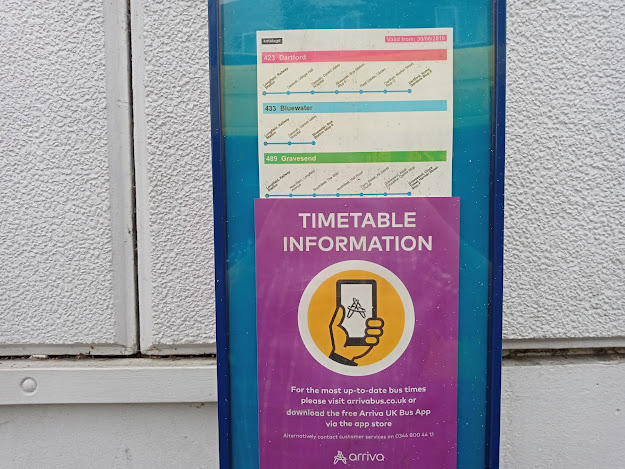 No sign of a Go-coach timetable at all. So that was Longfield, now to get back but I had a cunning plan. I caught the 1150 from Longfield to Bromley South, which gave me a rather tight 3 minutes to get the train back to Sole St. It was 4 minutes late. Normally that would have made me rather cross, but I had already decided to lunch in Bromley, having checked with the ticket clerk I could legally leave the station. He confirmed as I had no choice but to be there indeed I could. so I did, returning an hour later to catch the 1305 back to Sole St. If you make the connection the return journey via Bromley takes 41 minutes. If not it's 1hr41m, which is a lot for a journey that should take 7 minutes! If you return via Rochester it will take a minimum of 52 mins as the train from Longfield conveniently gets into Rochester a minute after the train to Sole St has left. Get the wrong train from Longfield and you have an hour there. Rochester station in bad weather is not a hospitable place. It also means if you travel from Sole St you can legitimately travel via Bromley, do your shopping, have lunch and do it for £4.20 instead of £8.90. 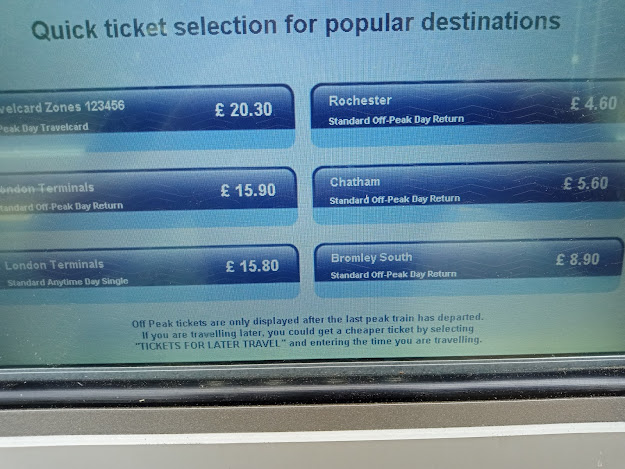 Yes, the machine was working again when I got back but the rubbish was still there.
To conclude, here is the off peak stopping pattern from London to the Kent coast via Faversham. It clearly favours the High Speed services. 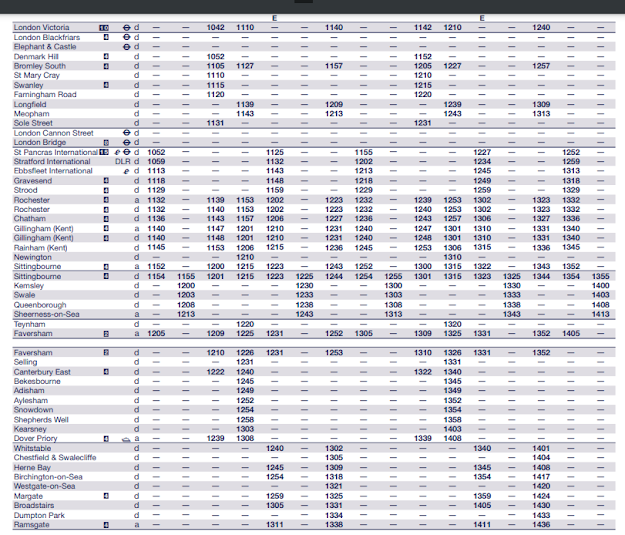 When we are trying to encourage people back onto the railway surely slowing services down, forcing people to pay more, leaving out of date misleading timetables on display and turning 7 minute journeys into 90 min marathons is not the way to do it. I suggest a rethink is needed. Incidentally on Saturdays and Sundays all stopping services call at Meopham and Longfield, just to confuse everyone even more!