Not two operators you normally see in the same sentence, but both have been source of great discussion on the blog this week.

In my Ollie post on Wednesday there was much debate as to who the Olympians new to Manchester actually belonged to. My research suggested Greater Manchester Buses South, whereas others believed it to be Stagecoach Manchester, who took over Greater Manchester Buses South in 1994. So I am grateful to the Olympian Oracle, Robert Appleton, who has been in touch this evening to clarify everything. First of all he managed to find in his what I assume is a huge archive of old photos and slides a picture of one of the Canterbury Olympians in her early Manchester days. Here is 16760, originally 760, R760 DRJ now my header pic seen in March 1999 at Manchester Picadilly Gardens.

Secondly my information saying the Olympians were new to Greater Manchester Buses South was entirely correct. Those who said nay lad they were new to Stagecoach Manchester are also entirely correct. When Stagecoach took over Greater Manchester Buses South they kept the business name, and used Stagecoach Manchester as the trading name. This situation still exists, as can be seen from the most recent operating licence, which Robert has kindly sent me from the VOSA website. I hope this clears everything up and everyone's honour remains intact. 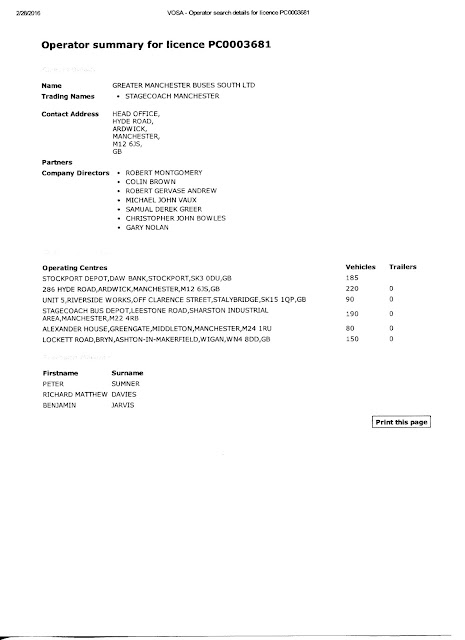 Many thanks again, Robert for your invaluable help.

Yesterday morning, showing devotion way beyond the call of duty, I set my alarm to catch the early morning breakfast show on Radio Suffolk. I had been advised by the presenter, Luke Deal, that an interview with Viv Carter would be played at 0720. So huddled under my duvet I listened in to see why Viv had decided to sell up to Ipswich Buses. Viv insisted there was no other reason to sell up bar the fact he was getting old and it was time to call it a day. Since they had had such a close relationship with Ipswich Buses over the years they seemed the obvious purchaser and so it happened.

Viv also revealed that the Carters name and livery will continue and that the operations will be run as a separate entity in house, if that's not an oxymoron, so don't expect to see IB liveried buses on the 93 just yet. He also confirmed that he would still be running the wedding/heriitage fleet. Now I know what you are all thinking.

If there was any big plan regarding the sale it wouldn't be revealed, just as much as if it was maintenance debts that made IB the obvious buyer. So as I expected we aren't much the wiser, but full marks to Luke Deal for trying to squeeze information out of Viv. I would expect Carters services to be better marketed now IB have control though. I got the distinct impression Viv was not a fan of all things computerised!

Finally on a sad note Ipswich Bus Blog broke the news last week that Soames & Sons (Forget Me Not Travel) of Otley are to cease trading in July, presumably at the end of the school year. A buyer has been sought for the firm and not found so another independent is going to disappear from the local scene. It will be interesting to see who picks up all the school work Soames carry out at present. I imagine a company not a million miles from me will have ears pricked up!
Posted by Steve W at 21:17