A Steam Bus? Oh Yes It Is & Ipswich P&R Update

There are some things you just don't expect - Leicester City winning the Premiership, a train running on time, Anglian to expand services, you know the sort of thing. When I left home today I didn't expect to see a steam bus, but that is precisely what I saw in Wickham Market. 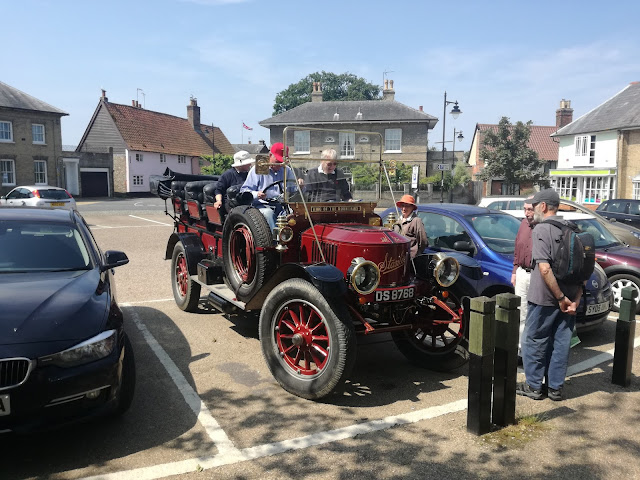 Allow me to introduce you to the Stanley Model 812 Mountain Wagon "King of the Mountains", designed to take visitors the 34 miles uphill from the railway station in Loveland, Colorado, into Estes Park, in the heart of the Colorado Rockies, where the Stanley hotel remains to this day.

This particular vehicle was built in 1914, would have cost around £300 new, and has amazing pulling power, far more than any internal combustion engined car of the time. It will do 60mph, and pulling away sounds identical to a steam train. There are 8 seats including the driver, although 3 children could easily fit in a row.

It's amazing to think that old girl, or boy if it's a King, is over 100 years old, produces little harmful emissions (gets through 90 gallons of water every 50 miles though) and yet it is still a struggle to build engines with low emissions - isn't it VW!

I got my information on the Steam Wagon, which is on a tour of East Anglia, from a very informative article at steamcar.net. I urge you to read the full article, which you can by clicking here.

Moving on if you cast your minds to February I exclusively broke the news that Ipswich Park & Ride was set to close.This led to panic by the council who denied it.  I also suggested, together with regular commentator Smurf, that the car parks would be kept open but service buses would take over from the dedicated service. It'll never happen a lot of people said. Well according to the Ipswich Star last night it most definitely IS happening, with Copdock P&R being absorbed into Ipswich Buses' 13, and Martlesham into First Ipswich's 66. It is suggested the 13 will be increased from 5 buses an hour to 9. The details for the 66 are yet to be finalised..

Now guys listen to me - there is an obvious solution to this which will benefit everyone, and I'm talking mainly to Ipswich Buses here as First know my ideas on this. Run the 13 as a circular service so after Chantry and Tesco it runs direct back to the town via the current P&R route, thus maintaining the direct link. Passengers from Tesco will like this too. The 13A can run the opposite way round to bring people back from town then it can return back via Chantry. That way you will also avoid having P&R loads and Chantry loads on the same bus. 5 buses an hour now often bunch - what will 9 do? Common sense.

The same can be applied to the 66, although I think the Martlesham terminus may well see more than the 66 in there - we will see on that one. My thanks to Brain and Andrew for alerting me to the Ipswich Star article, which you can read in full here. Rather good to be right over three months in advance!
Posted by Steve W at 19:03