No News Is No News!

Man is it dead out there. Nothing to report, nothing on VOSA, no new buses, no new trains, no new anything. Nothing, zilch, zip, zero, diddly squat!

It's so dead at the moment yesterday I went to see an operator begging for something newsworthy. After a bit of head scratching the MD said "well we had a bus MOT'd this morning...." That was it! So I hope you'll understand why there hasn't been a flood of posts recently. Even the predicted snow is going to be a non event. So with nothing local to report here are a few things you may be interested in.

Steady yourselves for the shock but Cambridge have some new buses on the Park & Sit In Traffic service. I have never worked out why P&R buses have to be painted in the most gaudy liveries. Yellows, pinks, oranges, greens of course, purples - and all for what? Anyway Stagecoach East have continued the trend by painting their new P&R E400MMC's in orange - assuming that car drivers can't spot their bus as easily as regular passengers I guess. I am grateful to John Taylor for sending me a couple of pics he took of the new buses. Many thanks, John. 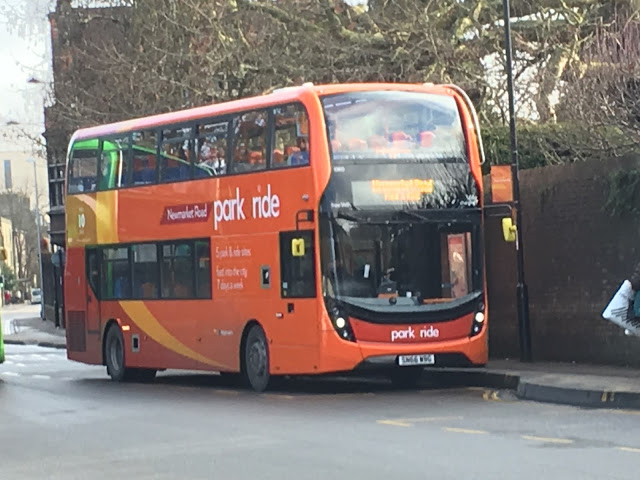 I also believe that there are new E200MMC's for Chelmsford P&R. Can't wait to see what new buses First get for Ipswich P&R! No stop laughing I'm serious!

With all the talk of the possibility of one or two light snow flurries, which will inevitably see everything grind to a halt as usual, I thought I'd share some real snow with you. A couple of days ago Railcam started streaming a camera located in Finse, a small Norwegian town on the Oslo - Bergen rail line. Now these guys have serious snow and guess what - the trains not only run but on time! It is a stunning camera and worth a watch. If you go via the Railcam site the departure times are listed  If you're not a member of railcam you can view the camera by clicking here, but it will be pot luck if you see a train! Here is the 1134 to Bergen this morning, which was 8 mins late, but imagine how late it would have been here! Incidentally the shed the train is heading into is exactly that - a shed built over the points so they don't get clogged with snow - there is one at the other end of the station too. Ingenious yet simple.

I did a bit of research into fares on that line, which takes over 7 hours from one end to the other. A standard single is around £89, but I checked a month from now, when apparently the snow is far greater, and I found singles at £23 and £30. For a 7 hour journey that's not bad at all and worth serious consideration. Many thanks, Railcam for sharing this quite magnificent location.

Coming home again and due to some strong winds last week Dawlish put on one heck of a show. I think it's the roughest I've ever seen it and I got some cracking stills. Here is a selection, with the usual thanks to Simon and the team for allowing me to reproduce them here.

Lord only knows what it's like being on a train in those conditions but by heck I want to find out!

On Saturday Tim and I are going to freeze our extremities off by going to observe the East Coast Main Line diverts between Ely and March so look out for a post Sunday on that, and Monday I have my eye check up at East Grinstead, and I'm thinking of training it this time as I want to get on one of Thameslink's new Class 700's among other things so again there will be a post on that if it happens.

In the meantime to all you bus enthusiasts my apologies but apart from a bus being MOT'd there's nothing happening!

Oh - if anyone knows the fuel consumption of a Volvo B9tl 2 axle let me know please! Thanks.
Posted by Steve W at 21:47