This is the traditionally quiet time of the year when not much happens, so there hasn't been anything worthy of a full post. So here are a few snippets of news.

Firstly it looks as though a new round of bus cuts is on the way, which is most definitely not good news. Beestons ae withdrawing the Sudbury - Great Cornard circular and reducing the frequency of their 91 Sudbury - Ipswich service, which I find astonishing as whenever I've used the 91 it's been very well patronised.

Sanders are also cancelling several services, although most seem to be Sheringham - Holt services, which will continue to be served by other services. The 33 North Walsham - Cromer will be operated by Our Hire, so I assume that is a tender changing hands. No details on either operator's website yet so I'll give more details when they are available.

Speaking of Beestons they have got their new 86 seater ADL E400 MMC  SN17 MTK out on the road. The bad news is it's for Two Sisters contract/private hire work only so trying it out will prove tricky. My thanks to Dave at Beestons, though, for sending me a pic of this, erm beest! Dave also informs me another one is expected early next year.

First Ipswich buses are appearing everywhere, or should I say ex First Ipswich buses are appearing everywhere. Volvo B7rle 66850, which had been at Lowestoft has now had Network Norwich vinyls applied and is covering a poorly Streetlite on the Charcoal line 40 to Poringland.  In the meantime sisters 66979/81 have been working in Yarmouth still with Ipswich vinyls, before apparently heading to Norwich to be painted into Red Line colours. I'm grateful to Cameron for sending me this pic of 66979 on the 1 to Lowestoft yesterday.

Now something a little more serious. There is a rogue Twitter account spouting absolute bovine muck relating to First Norwich. @NetworkNorwich3 is the account calling itself 5 Series 23RedLine24. Not only does it headline old news as current, but it also makes false claims about who operates what. Hee is an example. 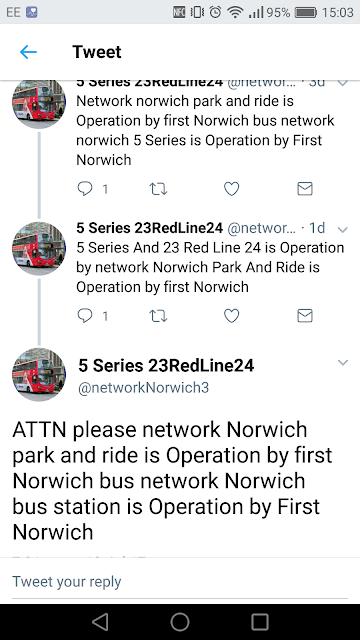 You can see how false and misleading this is. If anyone knows who is behind this account please let me know- anonymously if you like - so he/she can be stopped and dealt with. Thanks.

I managed a ride on one of Borderbus's newly acquired ex Stagecoach London Scania Omni Citi deckers last week. As I expected a decent ride, not many rattles, copious legroom upstairs but dear God the seats. I lasted half hour before my backside said enough. The sooner those seats are introduced to padding the better. Have to say though it did look good in Beccles. 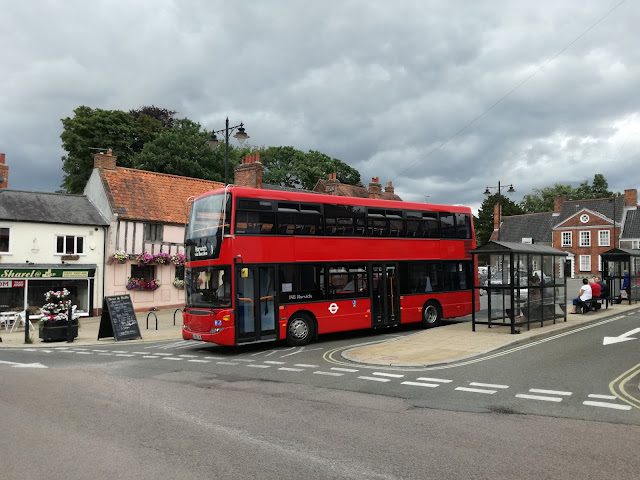 Now something I was hoping for but didn't think I'd see. Due to recurring faults on the coaches on the Class 37 short set they are being replaced, temporarily I presume with 3 blue/grey coaches meaning that superb working museum piece will look utterly authentic. I understand the swap is taking place over the weekend so look out early next week for the first pics. Now all we need, if anyone in DRS happens to be reading this, are 2 large BR logo 37's to go on the set to really complete the look. Come on - it can be done!

You will remember I had a pretty ghastly experience at Euston a few weeks ago courtesy of London Midland's non existent customer service. As promised I have been following up my complaint, and after a letter addressing the wrong complaint (they guessed) I finally got an email 3 weeks after sending in the complaint that they couldn't open the attachment so actually had no idea what the complaint was about. Negotiations are on going as they say but the way things are going I won't accept anything less than my own train!! It's a Go Ahead company btw.

Which brings me nicely onto Anglian. It has been decided to turn the Ellough site in Beccles into an out station, Go Ahead claiming that a PVR of 18 doesn't justify full depot status. As I understand it the offices and workshops are being mothballed, all management and admin are relocating to eithe Dereham or Norwich, and only two leading drivers, cleaners and a portakabin will remain at Beccles. Money will be paid in at Norwich, though how the 60H/S/61 drives are meant to do that is anyone's guess, and if a bulb needs replacing for example a van will be based at Norwich to speed to te assistance. All other maintenance will be carried out at either Konect or Hedngham. The company insist, though that Anglian is not closing.

Right that's it! See you soon.