The rain stayed away, the sun shone but not too harshly, and the public turned up in their droves. Thus was the first Norwich Bus Bash a success, and hopefully raised an impressive amount for East Anglian Children's Hospice.

Sometimes when your as involved as I am with the industry, albeit now as a former insider observing from the outside, it's all too easy to be super critical, to want perfection, to yearn for what isn't there rather than appreciating what is, and today was a classic occasion for doing just that. So I'm going to try and be a member of the public, and not an enthusiast. I understand on social media many enthusiasts have suggested how things could have been better, but in all honesty today wasn't for enthusiasts but for non enthusiasts, young and old, particularly young to enjoy riding on old buses, getting a pic of them in the cab of a bus, going through a bus wash etc. I only saw smiles and happy faces so job done!

As usual all the familiar faces were there, most of them friendly, I went with Tim, and on our arrival were met by Take That Superfan Sam Larke of Norwich Buses Blog, with Jamie Glasspoole, and First Eastern Counties Operations Director/Manager/Driver Chris Speed (should have seen his face when someone asked if he was a driver), whose brainchild today's event was. Most of the city centre shuttle buses were operated by the usual suspects, one of which I understand didn't last the pace and failed early on, but I will keep its identity anonymous. But there were some welcome visitors, and due to the higher than expected attendance some of First's own vehicles were pressed into action.

Our first trip was on Eastern Counties' last Greenway National. The Gardner engine boomed out and gave a pleasant ride, although it must be said it didn't enjoy the steep hill towards the end of the trip.


The next trip was on an old friend. Great Yarmouth Transport AEC Swift WEX 685M was reunited with former owner Chris Speed, and operated a couple of trips. A lovely bus, and Chris was clearly chuffed to bits to be driving her again.

Hungry work too, as it didn't take Chris and best mate Grahame Bessey of East Norfolk Bus Blog long to get back up to the city joining Tim and myself for lunch. A really good time spent chewing the cud as well as burgers, catching up on the latest news and gossip.

Chris and Grahame went back to Roundtree Way on the Greenway, while Tim and I waited for my main target of the day, Viv Carter's immaculately restored Bristol VR  VEX 294X. It looks simply majestic, sounds as awesome as a Class 37 loco, and gives a ride totally devoid of background noise. I was taken back 35 years in a instant. It was best in show by a country mile and worth the trip to Norwich on its own. Here it is in Castle Meadow

A bus making its first pulic appearance in new colours was Norwich Volvo B7l 60916, now renamed VW916 (still a Volvo not a VW). Repainted into Eastern Counties Livery and, praise be, re-padded seats it looked very good. I don't know if the rattles have been sorted but I presume not!

The workshops were also partially open, and inside was ex Ipswich B7rle 66981, halfway through being repainted into Red Line livery.

There was also the chance to see all of Norwich Network's different colours lined up together for the first time. Sadly not in rainbow order but even so an impressive sight. 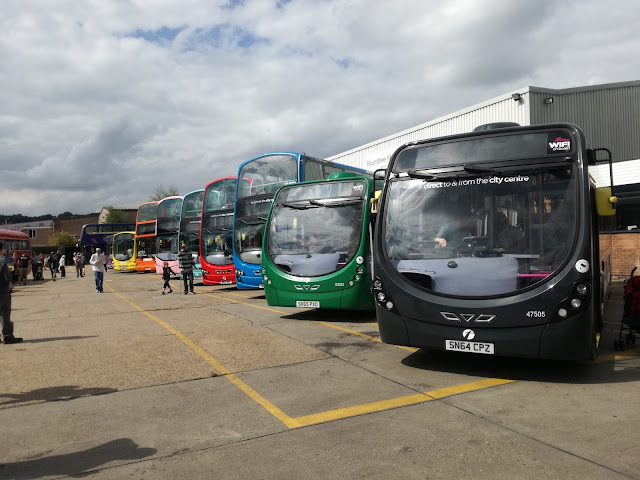 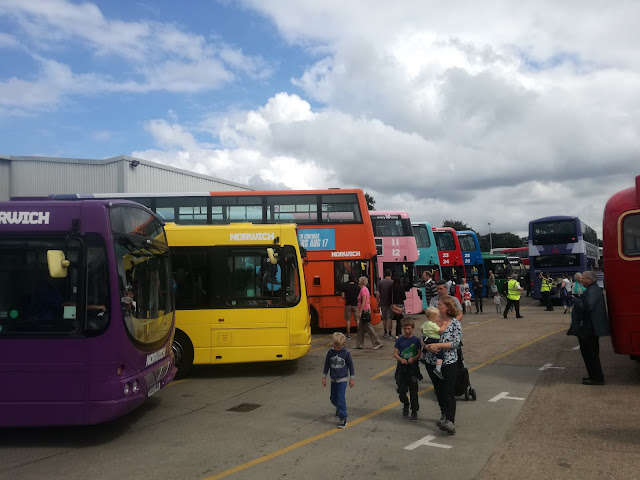 So impressive one small boy wanted his photo taken in a driving cab.....

And the day was done. Nothing reaches its peak first time round, and I hope this is the first of many Norwich Bus Bashes. What I will say is if you are going to open a depot up it needs to be all or nothing. I know Roundtree Way is operational 7 days a week but so are most depots. The engineering staff in particular seemed to resent the public's presence, and that was a shame. Having most of the other buses parked facing away from the public area was also noted, and it rather showed up less than universal co-operation in making today happen. I hope next year's date is set much earlier, so all departments can come together and work towards making the second Norwich Bus Bash even more of a success than today's was.

Kudos to Chris for making today happen, thanks to those who brought their buses and above all to the public for supporting the event in their hundreds. Good to see all the friends I did, sorry to miss those I didn't see, especially Clive, and catch you all soon.
Posted by Steve W at 23:15