S. In Part One you will remember I was giving Tim the London experience. When we left it we had just arrived at Wimbledon from Clapham Junction on a South West Rail Class 455 and it was time for Tim's first tram ride. The route to Croydon from Wimbledon mainly follows the old rail line until West Croydon when suddenly you find yourself stopping outside people's front doors. As in part one Tim will give his comments.

T. I have been to Blackpool but never on the trams, the only other trams I have been on are at the EATM in Carlton Colville so this was really different. Whilst on the old rail line it was fine very smooth and comfy but as soon as we hit the street part my jaw dropped. Just to be on the level with people was quite something and very different to a bus. And very easy on getting on and off.


S. I had planned lunch in Croydon, at one of my favourite Chinese buffets, which apart from anything else is a mere 15 yards from a tram stop. All boxes ticked there, so after a hearty pit stop we got back on the tram and headed for one of the other major stations in South London - East Croydon.

T. Ahhh yes lunch and that walk! I must admit the most fantastic place Steve found ! The ride to the station was again smooth and the integration between bus train and tram is very evident here.

S. It was time to get back on the mainline, and we were heading for Three Bridges, just south of Gatwick, where Thameslink were holding an open day at their Siemens Maintenance Depot. That meant getting frustrated once again on one of the new Class 700's, which was on the busy side it must be said. These trains give a really good ride. There is plenty of luggage space, good information screens but seats straight from Satan's waiting room. As bus seats get more luxurious in certain parts of the country the comfort of train seats is taking a nosedive, and that isn't going to encourage further growth and expansion. Anyway let's see what Tim made of it.

T. My first new generation EMU. Ride was rather smooth but yes the seats leave a bit to be desired as I couldn't get too comfortable. We can be critical here but we have to face the future and these are it and seem to shrink the journey as you don't feel the rattly bits like the old stock.

Here should have been a report of the depot open day, with many interesting pictures of lots of people looking at stationary trains. However, despite us waiting till gone 1430 to get there the queue to get in was still over an hour long. That wasn't on the agenda so with Tim's legs and my sanity in mind we decided to abort and walked back to the station. Now here is a secret that's just between you and me ok? The rear 1st Class section of a 700 is always declassified! So even if an 8 car there are plug sockets and vastly more comfortable seats to use,  but don't tell everyone or you'll never get in there!. Our phones needed charging so we decided to get the stopping service that starts at Three Bridges back to London, guaranteeing ourselves a 1st Class seat and a socket. I saw very little of that journey to Blackfriars, so can confirm the 700 passed the sleep test with flying colours!

T. Zzzzzzzz oh sorry yes here the seats felt like they should , enough padding to feel nearly like home. I dozed for the first bit which amazed me as normally it's only MK2 and 3 carriages I can doze in but was awake to see a few sights I hadn't seen and was also amazed at the graffiti and how they get to the places. I would have loved to see the depot but another day.

S. After a much needed nap we got off at Blackfriars, as I wanted Tim to see the views from the platforms, which now span the Thames. It took a long time to redevelop Blackfriars but my it was worth it. Cracking views, even if trains are a little predictable now!

T. The view was fantastic, as I have never been here so have no comparison I just took it all in. If I had time I would just stand and look for a longer time to see the river going by and it looks a very clean place which is how you would hope it to be. I can remember the 70's and 80's vividly and the pictures of how dark and dank a lot of places looked but if this is the future then it's ok. Could probably get all class 700 numbers in a day but what a nice place to do it. 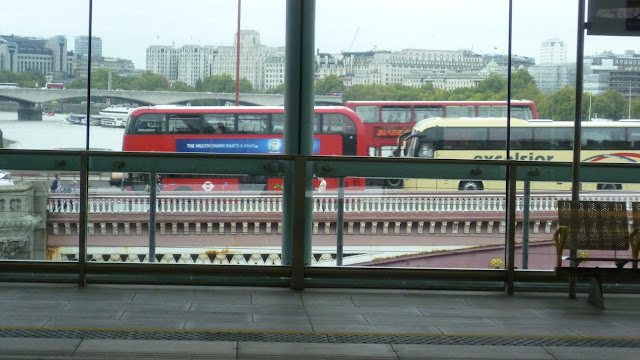 S. From Blackfriars another 700 3 stops to St Pancras International, a word with some friendly barrier staff and we were on the HS1 platforms and the Javelins. I remember seeing one for the first time, and I'm pretty sure Tim had the same reaction. They do look rather good!.

T. I had seen St Pancras on the telly box but it didn't do it justice! Really fantastic place and I was chuffed to see both the Javelins and a Eurostar even if the latter didn't depart(next time!) and couldn't help comparing them to bullet trains which look fast even standing still! I can also vouch for the toilet on the Javelin..(must remember to lock the door lol ) As with Blackfriars here the station is very light and airy with a lot to see. 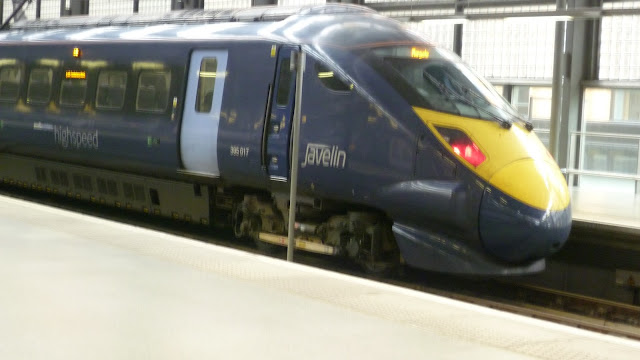 S. From there it was back on yet another 700 to Kentish Town, and a switch to the Northern Line to take us to Waterloo. By this time I think country boy Tim was finding the crowds a little disconcerting, and this is where I give thanks yet again for my upbringing in Kent, where I was exposed to both London and country life in equal doses, and given the freedom to explore them both at my leisure. London doesn't faze me in the slightest, but if it was my first time I think I'd get pretty uneasy too.

T. The switch to the Underground here felt like the old underground with the superb tiled walls and underpass to get to the platforms. I felt we were lucky though as the newer rolling stock has more room so you don't feel too hemmed in.Yes I was feeling a bit overwhelmed but was not giving up as to me the amount of people seemed to be 10 times what I remembered but at the end of the day the experience is what I signed up for. 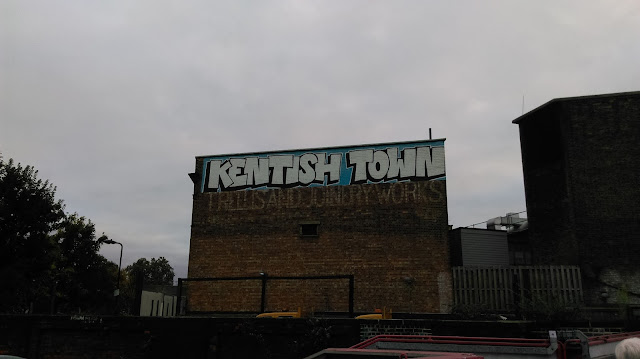 S. No Northern Line train pics for some reason (camera malfunction being blamed!) so straight to Waterloo, which is vast regardless of how used to London you are. It was also extremely busy (much busier than it looks in pic) with football crowds going home with other day trippers, and the evening shift coming in. I'm not sure Tim will ever look at Norwich station in the same way now. No 37's at Waterloo though, so give me Norwich any day!

T. Yes sorry I have sacked the snapper! Another new terminal for me and perhaps the most iconic which was exactly as it said on the tin. the busiest station in Britain! Got to see the famous clock, subject of many a romantic encounter....but not today lol (That's a relief - SW). Norwich has it's charm but here the charm is interspersed with total focused chaos which is a joy to watch. Definitely want to come back again.

S. That's it for Part Two. Still plenty to do and next up was an experience for Tim I was determined he had to suffer come what may! Part Three coming up soon.

T. I was at this point still a bit awed at some of the sights I had seen and was grateful to Steve for putting up with me. I had been on new and old stock, seen the future which we have to look forward to out East (in around 20 years - SW) but that won't stop me wanting to travel.....well there's one thing maybe as you'll find out.