A Day Of Excellence

Ok, I said I'd combine my two trips to London into one post. Forget I said that, and to confuse you even more I'm going to do Friday's first! You'll understand why as you go along.

It made a pleasant change to get the train up to London thanks to a decent deal on an Off peak Return from Greater Anglia. I'd forgotten how comfortable those Mk 3 coaches were, and it certainly beat driving down the A12 again.

My first mission was to ride the latest bus route in London to be converted to fully electric operation. The 153 runs rather confusingly from Finsbury Square in the City of London to Finsbury Park Interchange which is miles away north of Islington! But hang on, I hear you cry, you hate those electric buses so why voluntarily go on another one. Well they have improved. I ventured on one last week on the 360 in Vauxhall, of which more when I finally get that post up, and I was much impressed. Quieter, smoother, fewer rattles, all in all not bad, so I wanted to try one fresh out the wrapping. I'm delighted to report it was a very nice place to be. These BYD E200e's are so much better than the original examples on the Red Arrow routes, and an added bonus is these actually have USB charging points at most seats, which is unheard of in London as was enthusiastically demonstrated by the sheer glee of a group of college students when they discovered them! 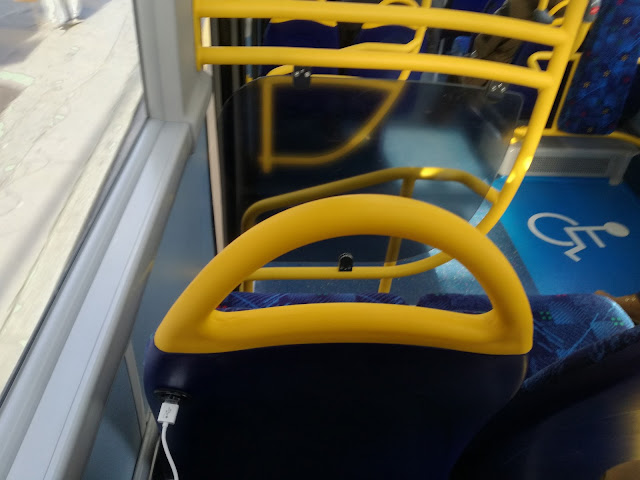 A trip down the driverless Victoria Line to Victoria was next, and the irony isn't lost on me that the only crew member on Victoria Line trains sits at the front and his/her sole job is to open and close the doors!

A stroll through Victoria Station and its shopping arcade and I was back at the Collonades Bus Station to catch the 702. I had been asked to give my opinion of the BCI Excellence which is on trial on the route, and I jumped at the chance. As I've ridden the Excellence during the day I thought I'd catch up with it for a ride after dark, which gave me time for other things.

Waiting on the stop was Reading Buses 1212, an ADL E400 in all over Vamooz livery, not what I was expecting. However a quick message to Reading Buses supremo Martijn Gilbert and all was made clear. Because this bus has a high ratio differential it is used as the official spare bus for the route. Perfectly acceptable for a 7yo bus, minimal rattles and it certainly moves.

This was my 3rd time on the route in the space of 6 weeks, and the first time the cloud had been high enough to see the planes approaching Heathrow from the A4. On Chiswick Flyover I looked up to see quite a large plane. This photo of the Emirates A380 Airbus was taken from a moving E400 and I'm quite pleased with it as keeping anything still on a moving E400 is a challenge in itself!

So to Slough, and with time to spare I sampled the new service 2, operated by Thames Valley Buses, part of Reading Buses, who have just taken over from First Berkshire, hence the ex Berkshire E200's arriving at Lowestoft. TVB are using Scania Omnicities on the route, with very comfortable seats, and if mine was anything to go by extremely courteous and friendly drivers. I hope the route is a success. It was noted that no one has to wait for TVB services in the cold at Slough Bus Station - the drivers stay on the bus and let passengers on up to 15 mins before departure. That's good.

Returning to Slough on one of First Berkshire's awful Volvo 7900's there was time for half hour on Slough Station which was enough to catch a few HST's hammering through, and my first look at one of the new Class 800 Hitachi IEP trains, that are basically Javelins in green! I'll save the train stuff for the next post as I want to concentrate on the Excellence.

Due to Friday afternoon congestion in Hammersmith made worse by a broken down vehicle the Excellence was delayed by half hour, but Lordy was it worth the wait.

Before I boarded I noticed that despite the delay the driver was still taking time to advise customers and dish out timetables, not seeming the slightest bit stressed. That was an impressive start. I settled near the front upstairs to be greeted by a familiar face. Fellow enthusiast and Reading driver Jonathan Berkolds had done the round trip from Bracknell, and we spent the journey commenting on how good the Excellence was and what would suit the route.

Since I last rode an Excellence, when Borderbus had one last year I have been on just about every new bus in production there is. Scania MMC's, electric buses, gas deckers, hydrogen buses, Streetdecks, Volvo B5LH's, the lot. The BCI Enterprise is head, shoulders and torso above the rest. I was impressed last year, but you will know I tend not to really judge a bus until it's 6 months old. Well this demonstrator is, and I fell in love with it all over again. The ride is amazing. Nothing but nothing rattles, it is astonishingly quiet, the seats I'd happily sit on all day, and then we come to a feature I didn't know it had, because I'd only ridden it during the day - the lighting.

When the bus doors are open the interior lights are bright. However 10 seconds after the doors close they dim, meaning you can look easily out of the window and see something other than your own reflection. Not great if you want to read the paper I'll admit, but most people are on their phones these days so the majority will love it. At Bracknell there was just enough time to grab a couple of photos before Peter, our driver loaded up for the return journey, taking no layover whatsoever except a quick trip to the loo, but after he had loaded up, getting customers out of the cold before he did.

With lighter traffic on the return journey the Excellence came into its own, gliding along effortlessly and by time we reached Legoland all the lost time had been made up, and while waiting time at various places I was able to chat to Peter and find out his opinion. 9/10 was his verdict, the best demonstrator he had driven by far and he loved it. However, nothing is perfect and he pointed out one or two minor niggles. Firstly, and I reported on this last year, the bell sound is the same as the indicators, which mean eyes have to leave the road and check the dash to see if the bell light was on. Ross Newman at Ensign told me that would be looked into so I'll be interested to see if there has been any progress on that.

Secondly while waxing lyrical about the lights dimming Peter pointed out that the door lights stayed on for the same 10 seconds after closing, which does make the cab area very bright while pulling away. Could those lights be on a separate circuit to just come on and off with the doors opening and closing?

But that was it. The nicest driving seat he had ever had, and on the motorway the Excellence still felt like a coach whereas all the others "turned back into buses and were affected by wind noise".

Drivers like Peter Cotton are priceless in their value to an operator. I have never had a more detailed or thoughtful analysis of a bus from a driver before, and it appears there is a great amount of discussion among the Greenline drivers as to what will suit the route best.

Quite simply they want Enterprises, big brother to the Excellence. Peter explained that they would give extra capacity for Legoland, which will be required in the Summer months, and the rear wheel steering would mean the tighter places at the Bracknell end would be manageable - after all, as he pointed out, there are Scania tri-axles already on the route. Put 4 tables upstairs, and you have a great selling point. But if not Excellences will do just fine. Peter tweeted the day after we met "Stunning bus to drive, best demo so far". Peter, it was an absolute joy to both meet and be driven by you, and I'll try and ensure you are driving any future demonstrators I check out!

So what are my conclusions for Martijn and his team. Well, an ideal bus has to tick many boxes. Will the passengers like it? Overwhelmingly yes, especially after Reading Buses have personalised it in their own customer friendly way. The ride is very quiet, even downstairs which puts it miles ahead of anything else, It doesn't rattle and seats are great. Will the drivers like it? In this case the drivers don't just like it they want it. Is it affordable? The Excellence is in the same price band as the E400MMC and so, so, much better so yes. Unfortunately the boxes I can't tick are the engineering ones - fuel economy, availability of parts, reliability etc, but I know John Bickerton at Reading will be poring over data as I type. I also spoke to Ross Newman the other night who told me he will buy BCI again over anything available from the UK market. Says a lot.

It was a bold, some might say very risky move to call a bus an Excellence. Asking for ridicule and it to come back to bite you. However BCI knew what they were talking about and have been vindicated. A few years ago Malcolm Robson asked me what I thought of the Mercedes Citaro demonstrator at Ipswich Buses. I rode it, and emailed him one word - "invest". They did, though sadly not to the same spec, which I'm guessing was taken out of Malcolm's hands by how much IBC would cough up. My advice to Martijn and John at Reading buses is the same. You have found your bus. The only bus that could top the Excellence is the Enterprise. I suggest you both ride it in service to see what your customers will see, and listen to your drivers. I didn't want to get off it, and no bus has done that built in the last few decades!

The day didn't end there, as I had my first ride on an IEP back to Paddington from Slough, but that can wait for the next post. Today belongs to this wonderful bus that proves it can be done if enough thought goes into it, and all the complaining about body noise is justified.