That sounds a bit drastic doesn't it but I'm convinced they have. Let me explain. Last year Megabus reduced their London - Norwich service by 25%. Monday - Thursday. The very useful early journey to London was scrapped, as was the equally useful 0930 return, and the late 2200 from London. In short they got rid of their most useful services. They also introduced a new stop at Stratford which added to journey times. However it was still good value.

But yesterday Megabus announced that from May 7th the M16 Norwich - London service is to be changed again. It will, from that date no longer serve Victoria Coach Station and will terminate and restart from Stratford. What???? Honestly???? Can you imagine if Greater Anglia suddenly announced that they weren't going to bother serving Liverpool St anymore, but would terminate at Stratford and customers could make their own way into Central London. Just think about the outcry for a moment.

This is what Megabus are shouting from the rooftops:

"Our Norwich to London service is changing! Instead of our final stop being London Victoria Coach Station, we’re now stopping at Stratford International. But the great news is you can now get to Central London even faster! And it’s all low cost – so heading into the heart of the capital has never been easier!"

Hang on a sec - get to Central London even faster/ How do we do that Megabus?

"So want to know how quickly you can get to Central London? We’ve got the lowdown for you…"

Looking forward to this - do tell us!


"You could be in St Pancras in 6 minutes when you’re catching the High Speed services from International Station. Or you can catch the Central Line from the regional station to Oxford Circus and be shopping up a storm in 20 minutes."

"Payments can be made quickly on both routes using contactless and Oyster. Or you can hop on the Central Line or red line to Londoners!"

Ahhh I see! Ok let's check the small print for any catches. No small print? What none? This calls for some research. Let's start with cost shall we?

Megabus proudly emblazon all over their coaches "fares from £1 + booking fee" and indeed currently on May7th there are some £1 fares available. But not on the first trip up to Stratford. That's now shot up to £6.55. You leave Norwich at 0630 and arrive at Stratford at 0900. Then you have to get into London. As Megabus state HS1 into St Pancras is the quickest way, although if you actually want Victoria it's of no use whatsoever as the walk from the HS1 terminus to the Underground network is enormous. Nevertheless it's quick, and if you have an Oyster card, as all people travelling from Norwich do, you can use it on HS1. However beware. Oyster cards have daily caps, which means you can travel as much as you like but won't ever have to pay more than just below the corresponding Travelcard fare. Except HS1 doesn't count as part of the cap, so the single fare of £5.90 will be added to anything else you use your Oyster card for. Either way that £6.55 has turned into £12.45 and you still have to get to Victoria, which will cost you £2.00 with an Oyster card on the tube or £4.00 without. So it could cost you £16.45 if you book today to get from Norwich to Victoria.

But of course if you want to go to Victoria you won't go that way if you know of the catches. you'll follow the other advice and jump on the "red line" - I have never, ever heard it called that before - and change onto the Victoria Line at Oxford Circus, humping your heavy suitcase. The Oyster fare is £2.90, cash £4.90. Oh hang on though, the Central Line goes absolutely nowhere near Stratford International Station so you'll need to get a Docklands train to Stratford regional station, up some stairs to the Central line platforms. But don't do that - stay on the DLR to West Ham, then switch to the District Line straight to Victoria - the journey shouldn't take more than an hour.

Then repeat on the way home. You have GOT to be kidding! This is how Megabus end their promotion..

"Fast and cost effective – what more could you ask for? Book your next trip now!"

Regular readers will know I use Megabus a lot when going on long journeys. I have praised them to the skies, they have made it possible to get to places I could never have gone to otherwise. I travel up from Norwich to Victoria and CHANGE COACHES. I will travel back overnight from wherever I am then catch the first Norwich coach out of Victoria. I tell you this, Megabus - if you think I'm going to get to Victoria after a 10 hour journey, then have to muck about on buses, tubes and trains to connect with the Norwich coach, at significant additional expense you have another think coming, and I'm sure I'm not the only one thinking this. I assume this decision has been made because of the London congestion, and on that you have my sympathy, but to kick your customers off at Stratford without arranging ticket acceptance with other providers just smacks of not giving a damn about your customers and gives the impression you can't wait to get rid of the route altogether.

I urge Megabus to have a rethink on this as I cannot see any way these changes will increase patronage or improve the route and customer experience. It has certainly put me off using the service, and I will seek alternative ways to connect with coaches at Victoria, even if it means a white Levante. 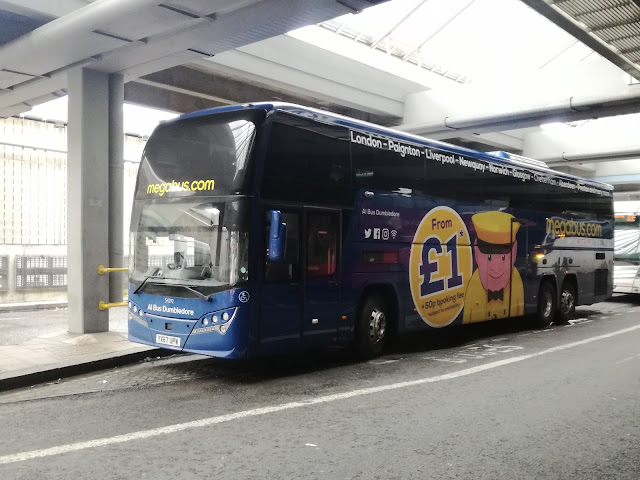