It's been sometime since Borderbus managed to wrangle a demonstrator, so when they announced yesterday that one was on the way it aroused interest in many quarters. This particular demonstrator turned out to be an extremely eye catching ADL E400MMC. I was out bright and early (for me) to catch a ride on it and see if it managed to impress me anymore than previous MMC's, which have left me feeling distinctly underwhelmed.

First of all this bus looks stunning inside and out. The MMC has an attractive body (no sniggering at the back) and the interior is up there with the best I've been on. Light and airy thanks to the glass panels in the roof, seats which look comfortable, USB charging, wireless charging if your phone is enabled, tables, air con, even a radio. And those seats on an E400 that are normally rock hard - over the wheel arches and back seats were fully padded too. 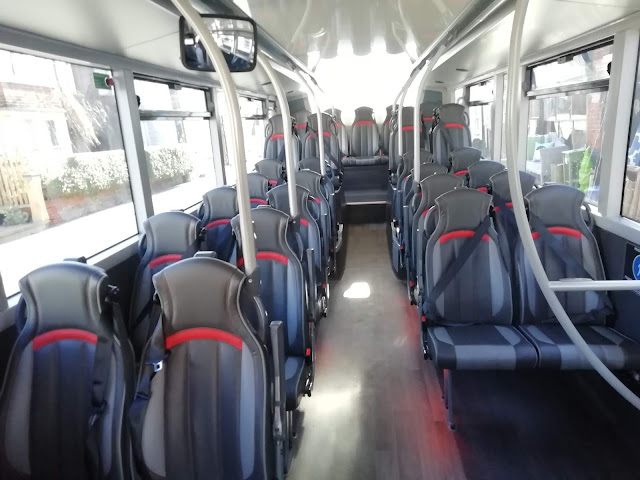 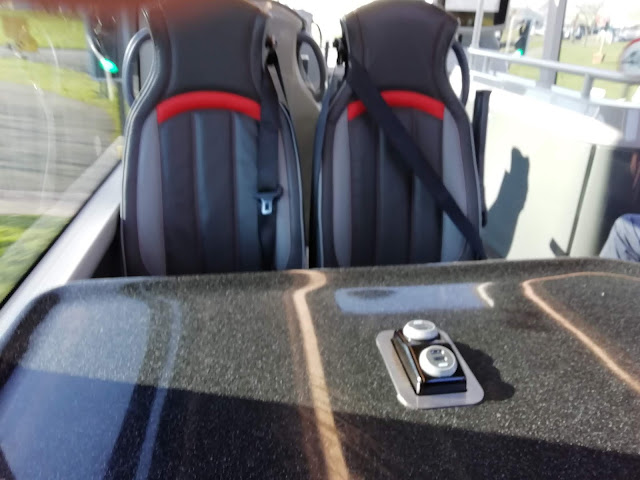 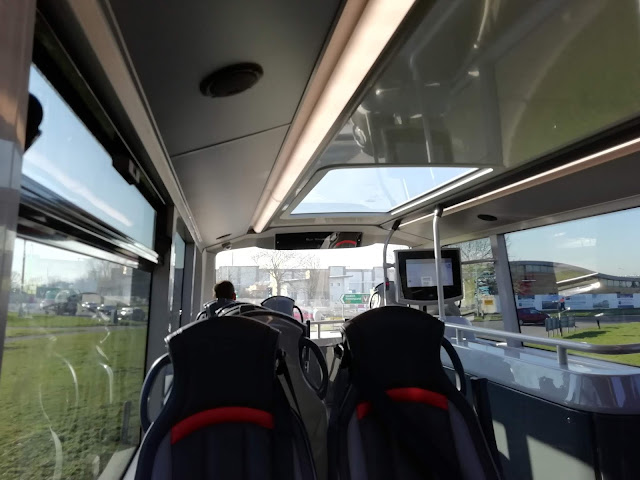 However, then the wheels start turning and the usual frustrations emerge. The suspension is just too hard - Roger French's coffee cup test would fail abysmally - and there is just too much body creaking and rattling. I was told once that was because lighter materials were being used to keep the weight down. Poppycock! The engine is smaller than they were 50 years ago, yet the bus weighs over a tonne heavier than they did 50 years ago when they didn't rattle! The engine, as it happens is extremely impressive - very powerful and gave a decent kick down when needed. The brakes are smooth and even, although that might have been Terry's good driving.

One word about the seats - initially very comfortable after 30 mins or so you begin to notice the lack of lumber support and by time we reached Southwold I could feel my back more than I should have done.

Now you will know I always ask the driver their views. Today I didn't have to as Terry let me know what he thought of it the second I stepped on board. He loved it! Said it felt like driving a coach, not a bus. The only quibble he had was the cab was a tad cramped and he couldn't fit his bag in it. Other than that he was one very happy bunny. A very considerate bunny too as he made a point of slowing down whenever he saw anyone taking a picture of the demonstrator, and there were a few. Extra useful today as the (very welcome) sun made photography very challenging at times. Terry isn't an enthusiast, but respects those who are, and that is a rare quality these days. Cheers Terry - more than one person asked me to say thanks!

So my verdict? Yet again I've alighted from an ADL demonstrator frustrated that it could, and should be the perfect bus, but just isn't. There is so much potential there if the suspension was softer and the body that bit more robust to get rid of the Poundland type quality noises it emits. I'm going to ride it again this week, then jump on a B9 Gemini 1, which is my benchmark, to get an instant comparison. I think it will confirm my feelings, but if anyone else rides the MMC and has a different interpretation then please share it - I can only say what I think after all!

As I got off the demonstrator I almost literally bumped into Roy Northcott of East Norfolk Bus Blog, who I haven't seen for months. They were flooding the area, as I had passed Graeme Bessey from the same esteemed blog earlier on. A decent natter with Roy ended up with us both driving to Beccles to pay Borderbus a visit as their latest Scania Omniciti decker was being vinyled up, bringing the total number of Scania deckers to 6, and don't be too surprised if that's not the last. YR61 RUY was new to First London before passing to Metroline. I must say they do look good in the Borderbus/Ryan Air livery, as good as anything new on the road.

A good natter with the Borderbus crew ensued, including Bernice having a right royal rant about the inconsiderate parking of buses in St Stephen's St - there are times I'm so pleased she's a friend! Anyway in other news Enviro 200 BB11 BUS, which had a smoking time on the A146 a few weeks ago is away for rewiring, and hopefully Scania decker BB53 BUS will be going away to have padding introduced to the seats soon too - the padded seats are proving very popular. Two of the Volvo B7tl Presidents have been withdrawn and are currently donating parts. Roy's blog has details of which ones as I've already forgotten!

The timetable for the new 99A was released yesterday, and it really isn't good news for those on the route used to an hourly service. Just 5 journeys a day will operate each way between Southwold and Bungay, for connections to Norwich, not even guaranteed connections. The former BH272 school service between Blythburgh and Bungay High School has been renumbered 99H and is available for anyone to use now, though who in their right mind would want to is debatable!

No new timetable or operator for the 90 has been announced yet, although it's possible that those Halesworth residents who used to use the old 62 to Beccles but were left stranded when it was removed from the estates might have some good news.
Posted by Steve W at 22:06