Thanks to several sources I can reveal that Ipswich Buses have bought 13 ex Trent Barton 12 reg Optare Tempo SR's to replace the surviving Optare Excels and Dennis Darts. I confess I'd never heard of the Tempo SR so did some research.

The Tempo SR was launched at Bus and Coach Live in 2011 ans I have to say looks rather smart. 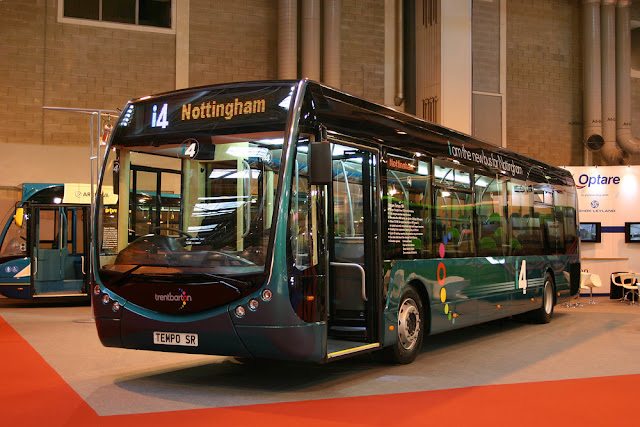 They can seat 41 but have a large standing capacity too.  However, only one batch was ever built, ordered by Trent Barton to operate on their Rainbow 4 service.

I'm not aware of when the Tempos are due to enter service, but as I get the info I'll pass it on. Of course the question is why only 13 were ever made, and why Trent Barton are selling them. At least the Civic V3 seats (thanks Andy) are a whole lot better than the recently acquired Scania deckers!

In other news everyone is bracing themselves for the latest council budget announcements. As far as Suffolk is concerned I've been told subsidised services could face a 20% cut in funding, and 5 routes are under threat. Again, when I hear anything I'll pass it on.

After the last one was badly vandalised, Wickham Market, my old stamping ground in Suffolk formally opened their new bus shelter on Tuesday. I had no idea this was happening and just happened to be passing through. So I stopped, did a bit of nosing around, and left quickly before my mouth got the better of me when I overheard people asking where the buses went. Clearly a lot of non bus users wanted to be seen at the opening of a bus shelter...