I thought about splitting this into two parts but since the next few days might be a bit in the air I'll do it all in one, so happy reading.

On the final day of my long weekend in Scotland I had booked train tickets to Aberdeen. Two and a half hours each way, a round trip of over 250 miles for £22 return. Thanks Scotrail. So I settled down in my Class 170 and enjoyed a glorious journey up Scotland's East Coast in unbroken sunshine. This was the view of Dundee and the Firth of Tay. It was raining in East Anglia when I took this!

I know we have some 170's in our area but since they stopped running through to London they don't really get a chance to spread their wings and really motor. The Scottish ones do and I have to say they are an extremely pleasant train to ride on for long periods. It didn't seem like two and a half hours before we were in Aberdeen.

My primary mission was to get on the big Van Hool Hydrogen Buses running in Aberdeen (see here) but to my great surprise and delight there were many, many more things to see. We'll start with Stagecoach. The first place I had to find was the bus station, which seems to be solely used by Stagecoach and a right mix of vehicles they have there apart from the hydrogen buses. The first to catch my eye were a pair of Olympians that seem to be used for school services. The Olympian at the front 16116 has the chersihed plate JAZ 9854 but is in fact former Stagecoach London R116 XNO

Also observed were E400's E200's and hybrid E300's. However Stagecoach also have a number of longer distance routes under a couple of brands. Megabus obvously and Buchan Express. If you look at the hydrogen bus I travelled on you will notice it was on route X17 to Elrick. Not sure what the X stands for as I didn't note much express to it but apart from the hydrogen bus I noted E400's and E200's also on the route. And this. Sorry the picture is blurred so I can't give a positive ID on the vehicle except it's a 12 plate, but I think I can be forgiven in not expecting to see this on a local bus route!

They also boast enormous presence. When I saw them last Monday and took this picture I was unaware ths was their very first day in service. I think that's what is called timing. Now to return and ride them!

So on to First, and of course Aberdeen is the Headquarters of First, so you would expect a fleet of the finest vehicles in their home town. Actually that is not the case. The newest vehicles were the now ubiquitous Streetlights with some E200's thrown in for good measure. Some 57 reg Geminis were operating on a platinum service but there were a huge amount of old Wright Renown and Floline Scanias and Volvos. So many I'll be amazed if they are all replaced by the new year. Since none appeared to be repainted I'm fairly certain they haven't been convertd to DDA compliant.

However what really caught my eye and totally unexpected were the bendibuses First have up there. This is 10168, a Wright Eclipse Fusion bodied Volvo B7LA.


At the moment there are 3 types of bendi in Aberdeen. The examples as above have been refurbished and had the leather treatment etc. But two older models are still pounding the streets. You would need a cattle prod to get me on this one! W7 FAL is also an Volvo B7LA but has a Wright Eclipse Fusion 1 body which means seats from hell like the B7l's at Norwich and Yarmouth

The final example is even older and I presume not long for this world. 10044 is a Volvo B10BLA with Wright Fusion bodywork. Only 2 or 3 of these are left in service so this may well be my one and only glimpse of one. Apologies for the van getting in the way

And so with enough time left a ride on one of these bendis was needed. Knowing my backside had a 24 hour journey back to Suffolk ahead of it I bravely waited for one of the leather seated examples to turn up and went for a trip. I was lucky to have an extremely friendly lady driver who had no problems with pictures and questions.

She told me that First are due some tri-axle deckers imminently - I presume E500's and when I said I was from East Anglia raised an eyebrow as she had heard a whisper some of the bendis might be heading this way for a Uni route. That can only be the 25/26 but have heard nothing this end.

What a superb few hours in the Granite City. I'm going to need a few days there next time but will wait for longer days to come back first. It's a shame Aberdeen is so far away as it's by far the most interesting and diverse city I've seen buswise for decades, and I include London in that. Loved it.

To cap it all I bumped into an old friend there. I had read on Clive's blog that former Ipswich and Yarmouth Volvo B10LE 60813, originally sent to the South West for retirement had somehow found its way to Aberdeen (blow driving it all that way) and as luck would have it I saw her and managed to get one final pic of her before she suffers death by DDA at the end of the year.

Oh and for those purists among you yes the Overground sign is still there! 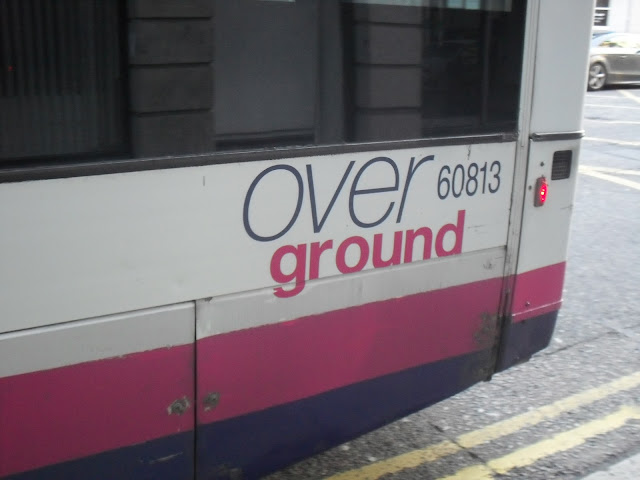