On September 9th The Queen opened the longest new domestic railway to be built in the UK in over 100 years. Borders Railway runs from Edinburgh to Tweedbank along 30 miles of new track, 21.5 of which is single track. 7 new stations have been built, and while I was up in Scotland I decided a trip on the new line was essential.

First of all the cost. The distance from Edinburgh to Tweedbank is roughly the same as Ipswich to Witham. An off peak day return from Ipswich to Witham is £16.10. A return from Edinburgh to Tweedbank is £11.20. I know public transport in Scotland is cheaper than England but for a 55 min journey this is good value and judging by how busy both journeys were is paying dividends.

Journeys are operated by either Class 158 or 170 Dmu's. My vessel for the return trip was 158702, and very nice it was too. Here it is at one of Edinburgh Waverley's hidden platforms - quite possible the Northern Hogwarts Express leaves from Platform 9E!

The route out of Edinburgh starts slowly, but does give some good views of carriage sidings. Unfortunately I was the wrong side of the train going out and we were going too fast coming back to get any decent pictures, which was ac shame as one of the last Network Rail liveried class 31 locos was there, as was a lone Cross County HST loco attached to an increasingly rare Class 08 shunter.

However we were soon on the new line and to be honest the first half hour is fairly sedate with regular stops. It is only after leaving Gorebridge that the line opens up, the scenery becomes spectacular and the train gets a move on. Scenes such as this are regular.

Excuse the quality of those pics - we were doing about 80mph at the time! All to soon we had passed through the picturesque town of Galashiels and were at the terminus of Tweedbank, where there was a 10 min layover to strech legs and get souvenir picture!

Now there is one feature of the railway that caught my eye, and that is the novel way the line is protected from landslips. There are miles of dry stone walls constructed from ballast held in chicken wire cages. I have no idea how long thess took to construct but I think they add character to the line and show the amount of thought that went into it. 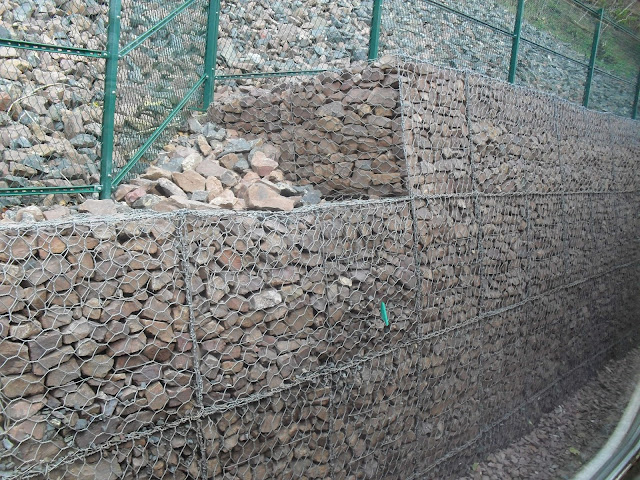 The railway was constructed in just 5 years and on time. My only quibble is that it doesn't connect with anything at the Tweedbank end. Surely these days no more dead end lines should be built. I just wonder if there was a case for extending the line to Berwick via Kelso maybe, to provide an alternative to the ECML during engineering works, for example, which would also attract people to the line from the likes of Newcastle too. Just a thought.

Anyhow I liked the line, and hopefully will spend a day next Summer exploring it, and the places it stops at more.

Of course Edinburgh Waverley station normally throws up a few good photo opportunities and the Saturday morning I was there proved no exception. We begin with an icon still possessing great presence, even if the soundtrack doesn't sound quite right these days.

There are quite a few Emu's in Scotland I have yet to sample. One of these was parked up just waiting to be photographed.

There were two locos in situ that I assume had been used as part of the Caledonian Sleeper the previous night. 67030 and 90044 were rather conveniently sitting on adjacent platforms.

And finally my favourite pic of the day - two old relics in the same picture. I thought originally I had got part of Edinburgh Castle in shot but it turns out it's another rather old building close to the castle. Still like the pic though.