In Part One I had survived the sauna at Euston provided courtesy of Mother Nature and London Midland, and arrived at Crewe to be met with a level of humidity I've only previously experienced at Miami Airport. However I only had a couple of hours there and needed to make the most of it, and opportunity knocked immediately. Standing on platform 12 was none other than the Flying Banana itself, Network Rail's New Maintenance Train, or The Holy Grail as it famously became known on Trainspotting Live last Summer. 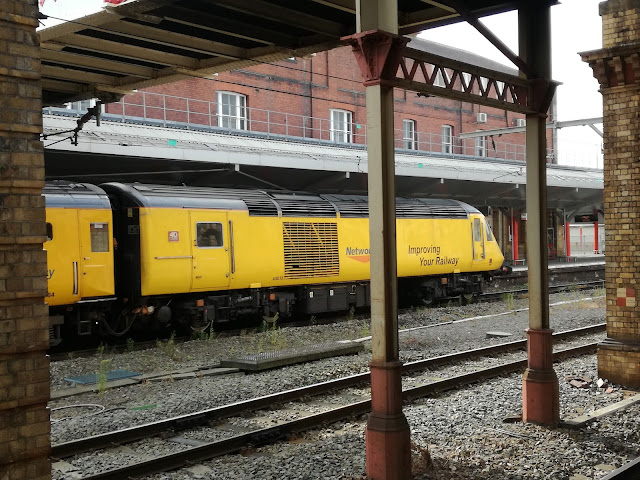 I've spent many hours watching Railcam's Crewe cameras and it was good to be able to walk the platforms and put things into perspective. It's a big station, and the platforms stretch out in both directions. Many operators run trains through Crewe, and I managed to snap a few of them.

A spare loco is kept at various locations on the West Coast line ready to rescue failed trains to get the line unblocked asap. Known as Thunderbirds 57302 was at Crewe, thankfully not needed.
Arriva Trains Wales also pass from Crewe. On Wednesday due to problems at Carmarthen their services were much delayed, but I did managed to snap at distance this 2 car 175.

While exploring the station I wandered along the seldom used by passenger trains platform 12 and came across this commemoration to Jack Mills and David Whitby, who were the train crew victims of the Great Train Robbery in August 1963. I find it rather sad this memorial should be on a platform where few will get to see it, and suggest it would be a nice touch to relocate it to Platforms 5 or 6 where far more people will be able to see it. I hope someone with influence reads this and takes the idea forward. 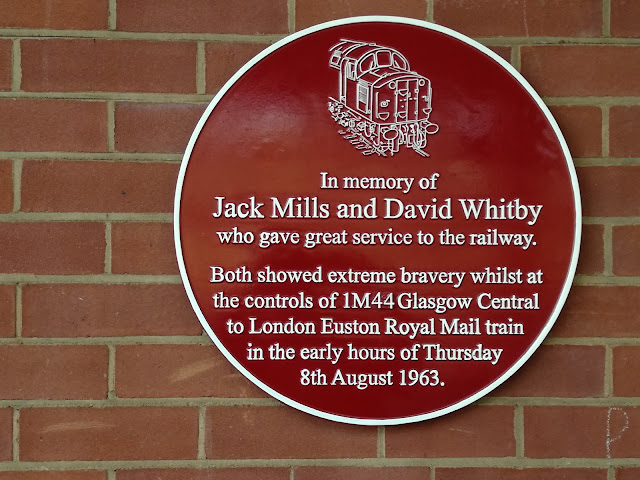 After a rather nice tea it was time to continue my journey north to Carlisle, and another first for me. I have never been on a Class 390 Pendolino before, and was interested to see how they measured up against other high speed trains.

My first impressions weren't great. An unusual layout, narrow windows and from what I could see no charging points. They certainly motor along though, in no time we were doing 125mph yet it reached that speed without the raw power of the Hitachi Javelins. Then things started to improve. Firstly the train started to empty out, and they are much nicer trains when not packed, which seems obvious, but some trains are better with a full load than others. Then a saint on Twitter told me the table seats had power sockets and all was good with the world again. I started to like the trains - the tilting on corners is rather impressive - and began to imagine something similar on the Great Eastern line. Sheer fantasy I know but one can dream. Just one quibble - despite being on the train over two hours my ticket wasn't checked, and no barriers in operation at either end. Anyhow we soon arrived at Carlisle, and the night shift began.

Carlisle station is undergoing a big roof renewal at present and it's surprising there is any scaffolding left for the rest of the country. This means navigating around the station is pretty difficult. I was advised to find the night Team Leader to tell him I was going to be on the station all night and he couldn't have been friendlier. Just asked me to observe the usual protocols but apart from that I could do what and go where I liked. He did advise me, though that the toilets were shut until morning, so I ventured to a local hostelry to use the loo and stock up on water for the night as it was still extremely hot and humid - which has got to be rare for Carlisle at 11pm.

I'll be posting the videos I took at Carlisle at the end of the final part, but suffice it to say I saw far more Class 90's than 66's, realised just how loud for electric loco's Class 92's are, and 37's look great at night. However for now I'm going to concentrate on Carlisle station. This will not be the last time I go there. It's an incredible place, with so much to look at apart from the trains. I didn't take nearly as many pictures as I should have of the exhibitions on the platforms for the Setttle & Carlisle line, and the Cumbrian Coast line. Timetables and attraction leaflets were ubiquitous in their availability, and I cannot wait to return when the scaffolding has gone and the station is back to what must be a stunning building. However, something I have never seen at a station before was awaiting me, and it couldn't have been more welcome. Carlisle station has padded seats on the platforms, which when you are about to embark on an all nighter is an absolute Godsend.

And so the all nighter began. I tried to take power naps between trains, but one thing did distract me from my slumber. There were some Northern Trains units behind me and were cleaned overnight to an astonishing standard. One guy did the lot from topping the toilet tank up, to cleaning, hoovering, sweeping and mopping the entire train. Then cleaning windows, tables, driver's cabs the lot. Impressive stuff.

Around 2am after the first London bound sleeper had gone a member of station staff (Darryl) came up and asked if I was ok. By this point the old bladder was starting to complain so he pointed to the train currently being cleaned and told me to use the loo on that. Excellent. An hour later he was back, and told me they had unlocked the Gents loos for me if I needed them, or to have a wash and brush up. He asked me what I was doing next, and I told him I was getting the 0515 round the Cunbrian coast but was a little concerned where I could charge my phone up as the Mk II's don't have power points. Darryl told me to follow him, and promptly unlocked the waiting room which had power points in it. What a nice guy, and what a contrast to the Euston experience. And what a waiting room! Is there a more magnificent fireplace anywhere in the country in a station waiting room?

At the other end is yet another display for the Settle and Carlisle line. You cannot get bored waiting for a train at Carlisle!

Now this trip was a trip of firsts, and here is another one - I have never felt compelled to take a photo of a gents loo before. But I was so bowled over by these at Carlisle I just had to. I'm sure everyone remembers how station loos used to be, and in a lot of cases still are, so to enter these which would grace any top class hotel or restaurant was a revelation.

I fell in love with Carlisle roughly 20 minutes after arriving there. The friendliness of not only the station staff but everyone I encountered was wonderful, and I cannot wait to return. I even managed to buy my Cumbria Rover ticket from the ticket office at 5am! Yes the ticket office opened at 5am which is quite remarkable. But special mention must go to Darryl, and the night team at Carlisle, who are a credit to Virgin Trains, the City of Carlisle, themselves and the industry as a whole. I can't thank them enough and look forward to returning in the future.

In Part Three the journey continues with the best part of 8 hours behind a 37, and my first trip on the Settle & Carlisle line.