Another 48 Hours - London & The North

Ok a bit of headline licence there as it was actually 61 hours but another road and rail trip for relative peanuts with many firsts for me and just as many boxes ticked. I have no idea how many parts I'll need for this as I crammed quite a bit into a very short space of time, and saw the best and the worst of the industry.

It started, as is normally the case with Megabus from Norwich to London. Once again  I had my favourite Scania Irizar, and this time I was able to get a pic to do it justice.

Quite something to think it is cheaper to travel on that coach than it is most E200's, in fact on the way back cheaper than any bus. Anyhow our decent driver reminded us that Wednesday was the State Opening of Parliament and due to road closures it might be quicker if we got off at Stratford and made our own way into Central London. Surprisingly few took his advice, but it made up my mind what I was going to do with the spare 4 hours I had before catching the train to Crewe. The heat was going to play a factor, and buses were certainly out. So I crossed the road, topped up my Oyster card, and prepared for my first ride on Docklands Light Railway from Stratford International Station.


Normally on DLR it is easier to win the lottery than it is to bag a front seat but on this occasion they were empty on both trains I travelled on, so you get a view rarely seen from a train, and it makes all the difference.

I ended up at Bank station, wondering what to do next when I saw signs for the Waterloo & City line. The last time I travelled on that line it still had Network Southeast liveried trains on it. Now TfL have taken over and it is now the shortest Tube line there is. 3 car modern tube trains are on the line, which takes around 5 mins from end to end.


Now at Waterloo in the middle of a fashion circus with Royal Ascot on - hat shops did very well this week it seems - I got a zone map and worked where I could go, hopefully on a type of train I hadn't been on before. Cue the 1053 to Alton and a South West Trains Siemens class 450. For what is essentially a commuter train with 3+2 seating these are lovely trains. Fast, quiet, smooth, outstanding air conditioning which was most welcome, and comfortable seats. Thoroughly enjoyed my journey to Surbiton in Surrey.

A wander then lunch in Surbiton, where I had most certainly not intended to be in the original plan, then it was back to Waterloo from this quite outstanding station building. Another deliciously cool 450.

I had hoped to avoid using any more Undergound due to the heat, the plan being to go back to Clapham Jct, then on Southern via Kensington Olympia to Wembley Central to catch the train to Euston from there. However a check of the timetables ruled that out so the Bakerloo line it was, hoping the Bake would be kept to a minimum. Unlike a lot of Underground lines, the Bakerloo is still fairly quiet off peak, so the journey up to Queens Park wasn't as bad as it could have been. Plus, of course, you have the oldest trains still left on the Underground network.

It was then time for another first, as I got my first journey on a London Overground Class 378. These are basically Electrostars with an all side seating Tube style layout. With air conditioning. On Wednesday, with the outside temperature getting to the silly stage of heat the aircon was a Godsend and dwarfed any petty moans I had about the trains. I don't really like side seating as you spend your time trying to avoid eye contact with other passengers, and can see little out the windows without getting a stiff neck. And who chose the seat moquette! Straight out the 1970's, not far removed from the original D Stock District line trains moquette. But who cares! It was air conditioned!


Now at Euston and what turned out to be the most unenjoyable hour not just of the trip, but quite possibly my travelling life. Euston was an oven on Wednesday. I was booked on the 1446 London Midland service to Crewe. I had noticed that the passengers on the 1346 had only been let on the train just before the train left, which I put down to the crew being held up on the inward journey. However that wasn't the case. Thanks to Real Time Trains I found out which platform the 1446 was booked from and waited, as although I had a 1st class ticket there were no seat reservations and only 24 1st Cass seats, 8 of which had windows blocked by vinyls and Karl Pilkington staring down at them.

The temperature was getting very uncomfortable, but the doors remained firmly shut. With half an hour to go before departure the train was advertised on the departure boards and others arrived, forming queues at every set of doors, With fifteen minutes to go it looked like this. 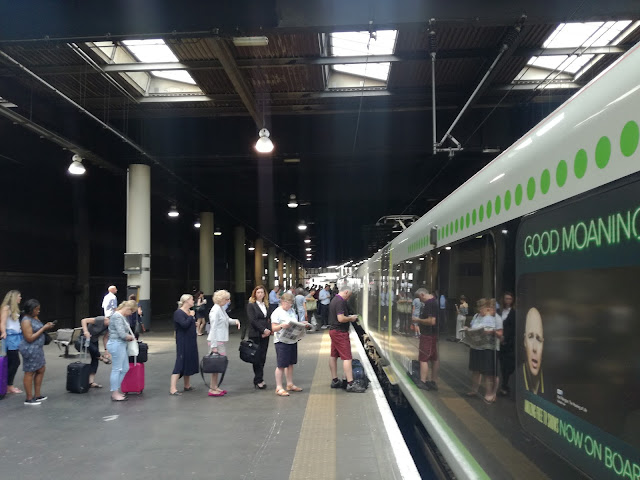 With 5 mins to go you can double what you can see in the pictures and more. Tempers were getting frayed, people were complaining of feeling faint, and one elderly gentleman kept telling me to press the door button in case they opened - like we were all standing like numpties on purpose! At 1443 the doors were opened. I have no idea how much sweat was absorbed by those seats on that train. I'm not sure I want to know. What I do know is it was customer service at its absolute worst. Had animals, or indeed a class of school children been left to swelter in that heat there would be prosecutions, and rightly so. When I Tweeted London Midland I was curtly told it was procedure not to open the doors until both crew members were there and that was that. Tough, in other words. No apologies from anyone, no one asking if everyone was ok. We've got your money and that's all that matters seemed to be the attitude. Rest assured I will be taking this further, to the Rail Regulator if I have to. Not to make allowances for the conditions was downright criminal, not to mention cruel. No mention of security either, in case anyone thinks that was the reason.

The journey itself was great, the 350 gave a fast, decent ride, although I was disappointed tickets were only checked once on the entire journey, that being just after Euston, to add insult to injury, and it appeared many who subsequently sat in 1st Class didn't have tickets for those seats, if tickets at all. Again not good enough. But we finally arrived at Crewe on time to be met with a level of humidity I've never experienced in this country before.

In Part Two 3 hours at Crewe, a night at Carlisle, and in complete contrast the best customer service you could ever ask for.