You don't have to be mad to do this hobby, but if you're not you won't get the unique experiences. I mean you have to be asking for committal to spend consecutive nights on stations as I did in June, but I think Tim eclipsed me on the last day of Class 68 operation on 8th September. He had mentioned to me that he was intending to stay on the set from start to finish of its diagram. Yeah, right, I thought, not a chance!. Well he did. Not sure if that's dedication or total insanity. So I told him the least he could do is write a post about his day, and I'm happy to say he did, so here is Tim's report and pics from the day, and finally a compilation of videos I took over the last couple of weeks, including its final arrival at Lowestoft with various nutters I mean enthusiasts on board, and empty departure to Norwich depot.

Now you know when an idea seems good on paper? Well this was me on Friday the 8th. For 14 months the Wherry Lines have been treated to a second Loco Hauled Short set comprising of 3 Mk 2 coaches and 2 Class 68 Loco's of which you have seen lots on this blog .
Now Friday was the last day of service for this combination so I thought I'd get a last ride but not just one - I did the whole day! So after catching the 05.42 from Lowestoft to Norwich I boarded the 68 set on the 06.52 to Gt Yarmouth seemingly alone, but joined by 2 other hardy souls and David the nicest guard you could meet. 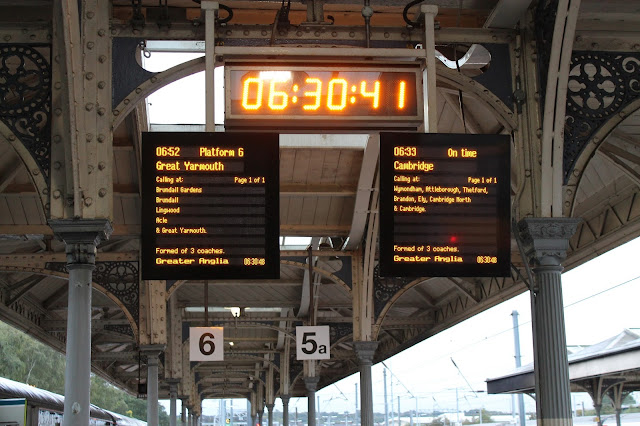 A quick photo call at Yarmouth and back to Norwich followed by a quick return to Yarmouth. 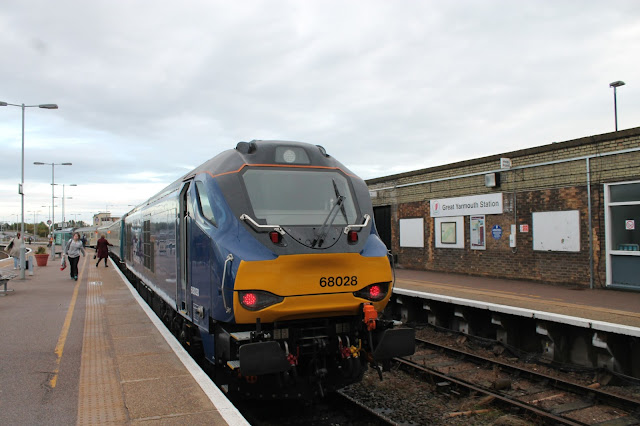 This time the return to Norwich gave me the chance to experience the crossover with the Class 37's at Acle. By this time a lot of other enthusiasts had woken up and were joining and leaping off at various stations to get pictures, but not me - I had vowed to ride each trip! 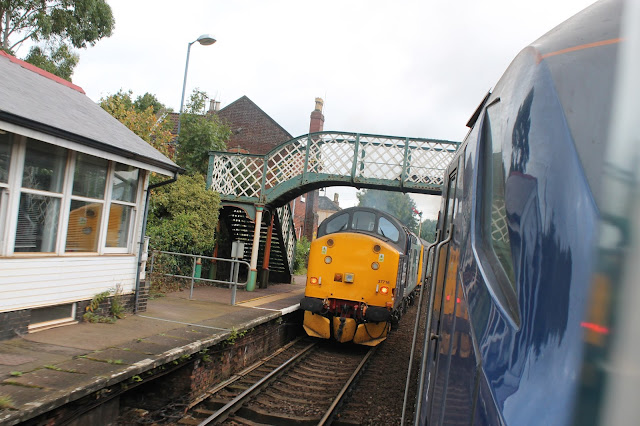 The scenery on both Wherry lines is quite spectacular, I find especially the long straight along the New Cut from Reedham to Haddiscoe which always seems to have the biggest skies you could ever see.
By the 10.05 run to Lowestoft the train was really filling up not just with enthusiasts but all manner of people showing what a really well used service it is.The day wound on to-ing and fro-ing between Yarmouth and Lowestoft including the extra journeys at 12.05 and 14.05. I met up after dinner with Matt Holland from the East Anglian Transport Museum who was also determined to be there at the last. Around that time the heavens opened like a mini monsoon which meant you couldn't see much.

We had a treat on the 20.40 to Yarmouth, as we were routed into Platform 1, which will disappear as part of the forthcoming signalling programme - cue furious scribbling in notebooks!

Back at Norwich we had another treat of the Steam kind, pulling into the low level was 60009 Union of South Africa ready for a tour on the Saturday. 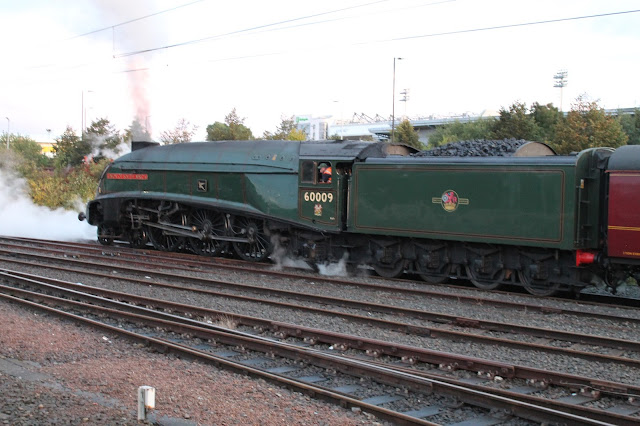 Then it all seemed too quick to be on the 22.05 as it left Norwich on the very last run. I was sad yes, tired absolutely because I had got up at 4am and was now feeling it. As we pulled into Lowestoft there were some enthusiasts, bloggers (yes I was one of them SW) and Community Rail people to welcome us all of the same mind. We were saying goodbye to something unique and when you have followed these loco's since they came here all 17 of them that have worked the set you do feel a pang of regret or two.
We watched as 68001 revved up and the driver gave us the final "tones" to say goodbye and that was that. We'll miss the big Cat purr as we called it , as it was a unique time for these lines as it still will be until 2019 with the Class 37's continuing until the introduction of the new rolling stock.

Thanks, Tim, and if you decide to do the final week of the 37's I just might join you!