If you haven't read Part One you can read it here.

At the end of Part One you left me at Bluewater having just alighted from a rather enjoyable Greenline liveried RT. I also had a phone with not much battery left, and many photos still to take so drastic action was needed. When I passed through Bluewater on MD60 I noticed Arriva Kent had got some new E400MMC's on the Medway - Bluewater 700 service advertising USB charging. Just what the doctor ordered so I decided to take a ride to Chatham and back to get the phone charged up before resuming the Running Day. There are some who really hate the new Arriva Sapphire livery, but from the front I don't think it looks that bad.

I honestly don't think that's too bad. However from the rear it's a different story..

At the start of Part One I said nothing rattled apart from one, and I would point that out when I came to it. Well look above and there it is. The newest bus was by far the worst of the day. To be fair it was great at speed on the A2 on a very smooth road. But run over a dead flea and you know all about it. Not only that but it was Dickensian Christmas in Rochester and the place was packed. It seemed as though Arriva had made no contingency plans whatsoever as passengers were complaining about waiting for up to 90 mins on what is only a 40 minute route. Simply not good enough on one of the busiest days for the route and it's this sort of lethargy and apparent lack of care that puts people off travelling by bus.

So let's leave the amateurish present in Kent, and return to the glorious past, where relief services were commonplace. I had a date with a DMS, but before that arrived I was treated to a couple of others in the fading light, allowing interior lights to take effect, and yes, MD60 by lucky chance was one of them! 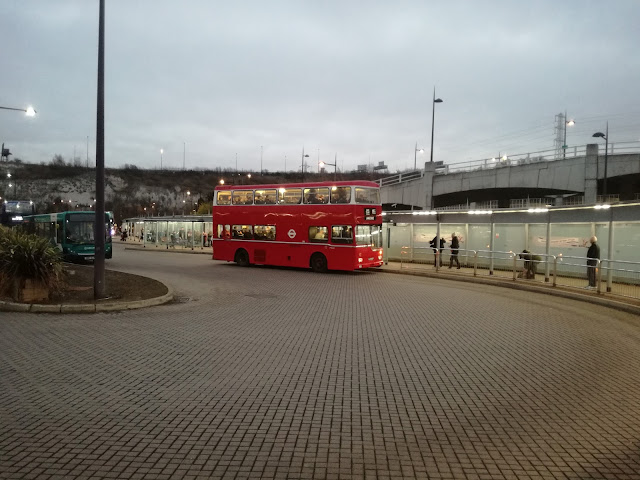 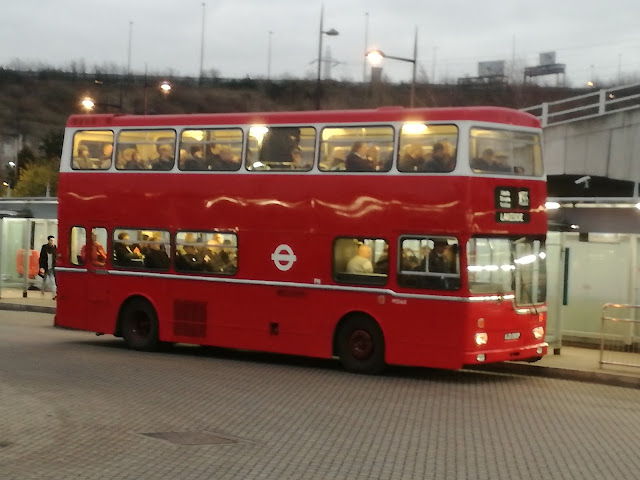 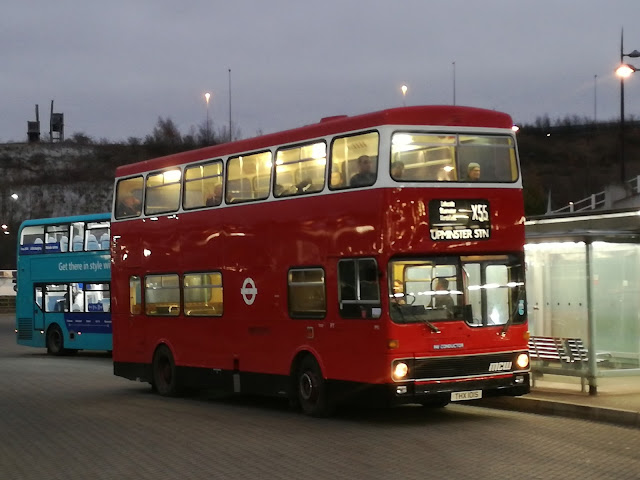 Then the DMS arrived. I drove open and closed top DMS in London in the late 80's and thoroughly enjoyed them. I also wanted to finally meet the driver of this one, a certain Martijn Gilbert, CEO of the highly impressive Reading Buses. We have got to know each other on Twitter but this was our first face to face meeting. I am a fan of Reading Buses - and not just because Martijn shares my hatred of rattles. The are very forward thinking, and Martijn is the sort of boss who thinks nothing of turning up unannounced and mucking in with the night crew to clean and wash the buses. I like managers who see everyone as a crucial cog in the smooth operation of the business, regardless of their role.

So I decided I'd stick on the DMS until the end of the day, hitching a lift back to Purfleet. So I settled down on this good looking bus and prepared for the ride...

...For a whole 5 minutes until Martijn broke it! We got to the top of a hill near Greenhithe, promptly lost gears and that was that. Then the fun really started. Quite a few of us on board had experience of DMS's and with things like that normal procedure is to shut the bus down via the master switch, wait a few mins then try again, just like Sky boxes these days. However none of us could locate the switch. Everything that could be opened was opened (you won't believe how many carry T keys "just in case", me included), every nook and cranny having 4 mobile phone torches shone into, but nope, couldn't find a thing. DMS stood for Denied Master Switch! Eventually after much trial and error the DMS was declared a failure.

This meant alternative arrangements had to be made to get back to Purfleet, so I jumped on a passing RT, as you do, RT 3251 as it turns out, and got chatting to the jovial Conductor, Tony Beard, who again seemed to live just for this one day a year. This led to me joining him on the platform (very much on inside bit) and the most enjoyable bus ride I have had in decades. Going through the Dartford Tunnel on the rear platform of an RT while chatting about the history of the crossing is something I won't forget for sometime.

I said about the Greenline RT in Part One that a bit more torque and a wheelchair bay and it would have serious potential. Well RT 3251 doesn't need the extra torque - it goes like a rocket! I then discovered who was driving, and the surreal aspect of the journey was complete. Driving was none other than Peter Newman, founder and Chairman of Ensign, who had flown in from CHINA the day before to be there to drive his favourite RT. I introduced myself at Lakeside, and he shook my hand like you would a friend you haven't seen for 25 years! He happily agreed to take me back to the yard so after a quick pic I jumped back on and we continued to Upminster, with Peter driving like a 10yo on a sugar rush driving a dodgem! For the first time in my life I fell in love with a bus older than myself that held no personal memories.

At Upminster the lights were turned off, Tony and I took a side seat each, and enjoyed a private journey on a special bus, driven by a legend of the industry. It just doesn't get any better and I only wish it had lasted a couple of hours. Back at the depot Peter continued to natter, denying any jet lag, before bidding me a friendly farewell.

I decided to wander around the shed as I had unfinished business with MD60. I had been asked by a Twitter follower for some interior shots, which obviously I couldn't do with passengers on. Unfortunately when I found her she was parked up in a dark corner and interior shots were impossible. Just then, though, a chap doing the shunting, putting the buses to bed pulled up in the RT I had just got off, and I asked if there was any chance of turning the interior lights on the MD. I hadn't finished the question before he finished it for me, gave a big grin, and said of course in a way that made me feel as though he was only there to serve my needs. Over we went, lights, camera, action and interior shots gained. 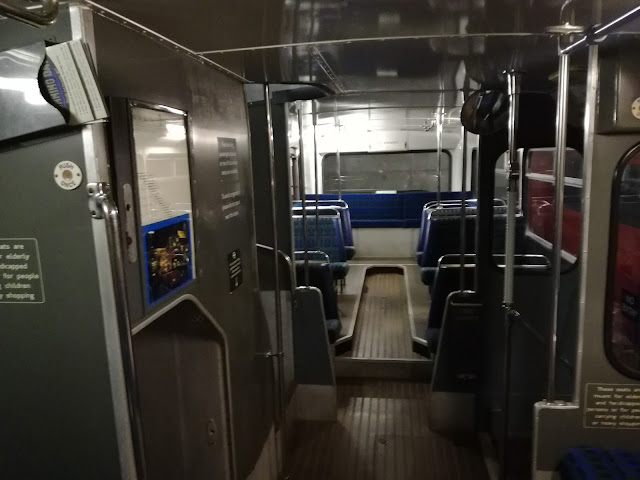 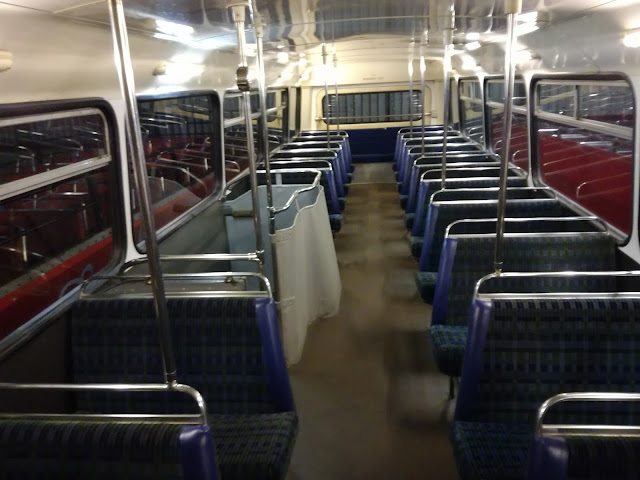 That, for me typified the day, and |Ensign overall. Nothing is too much trouble, enthusiasts are welcomed and embraced, and the sheer friendliness, happiness and contentment of those working at Ensign is overwhelming. It struck me today that if I have a regret in life it is that I didn't discover Ensign when I was driving. I have a feeling my life may have turned out very differently.

If Santa is reading this then I could do with a book of superlatives as I have all but run out. An incredible day, with incredible buses and incredible people. Even had Ross messaging me yesterday to make sure I'd enjoyed myself. I'll tell you this - if all bus companies were run with as much dedication, enthusiasm, consideration and love, then Council bus subsidy cuts wouldn't be an issue, as they wouldn't be needed. Buses would be everyone's first choice. Thank you Peter, Steve, Ross and everyone I met and chatted to on a day I will take with me when I leave this world.

I promised a compilation video of what I took at various locations and here it is.

PS Just as I was about to leave the DMS arrived back on the back of the tow truck. Turned out to be a minor alternator problem, but we won't let that minor detail stop us from still blaming Martijn!