This Christmas is going to be set pretty much in the past, not a bad thing in my opinion, but those who think Summer is the best time to see and ride vintage vehicles are much mistaken. Hot on the heels of the spectacular Ensign Running Day at the beginning of the month comes two more. Tomorrow, Christmas Eve, is a Running Day on the Greenline 702 between London and Windsor/Bracknell/Reading. The route is changing hands from First to Reading Buses and Christmas Eve was an odd day with no official operator, so Reading decided to have a Running Day. I will be attending thanks to my friends at Ensign, who are sending 2 vehicles.

Then on 30th December there is a Running Day organised by a company who don't like me naming them, but it's in Rochester, and I will be re-acquainted with my favourite Volvo Ailsa along with other buses.

However, the vintage Christmas started this week. In the wee small hours of Thursday morning a test train rumbled down the East Suffolk Line. It was booked to go down the seldom used Sizewell Branch, so Tim and I were at Saxmundham at 0130 waiting for it. It was soon pretty obvious it wasn't going down the branch due to the lack of Network Rail staff but that's life. It was still worth waiting for as we knew Europhoenix liveried 37611 was providing the power. I had been to Norwich earlier in the day to see it just in case the entire service didn't run, which had been known before.

Also in situ was DRS 37606, being used for stock movements currently, and in desperate need of a wash!

But anyhow the test train did go through Saxmundham, with the dbso leading. There is something magical about a rumbling Class 37 in the dead of night in the mist! We both agreed that a lot of enthusiasts really don't see things at their best. You have to be prepared to go out at all hours, in all weathers. Then you end up with sights like this.

As usual those pics are stills from a video, so here it is, a lovely soundtrack breaking the still of the night.


Yesterday I switched modes onto the first vintage bus of the season. City Sightseeing Norwich were running a free tour round the city using their Routemaster, which interestingly is two years YOUNGER than 37611 above. I was invited to meet up with former (?) blogger Sam Larke, who is part of the Conductor team at City Sightseeing for a ride before the heaving masses descended on the bus. Very nice it is too, but then it's a Routemaster so that really goes without saying. 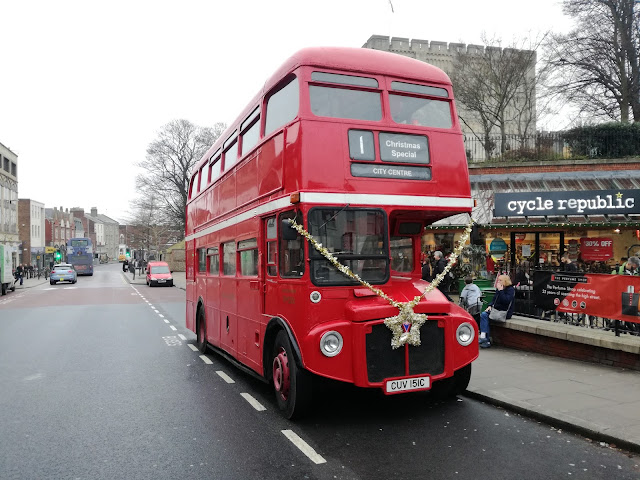 That's it for this post. All that's left is to wish each and everyone who reads the blog a Happy Christmas and a healthy New Year. Look out for the next post around Boxing Day which will be a report of the Greenline Running Day, with hopefully a bit more depending what turns up!