Now I Know My ABC I Can Get To Peterborough!

Doesn't rhyme, I know, but I've been up a very long time. Since yesterday in fact, as today saw the launch of the much anticipated new fleet of 19 Scania ADL E400 Citi buses on the formerly X1, then XL, (which made the route sound like a burger) Norwich to Peterborough route, all 84 miles of it. Now re-branded Excel it has 4 lettered routes, all variations on a theme, but providing new and well imagined variety and options on the route. As I was one of the first to know about the unique Scania/E400C combination I thought it only right that I should be the first passenger on one. That meant leaving home at stupid o'clock to drive to Kings Lynn in order to get the first new bus operated service, the 0530 Kings Lynn to Peterborough.

Make no mistake, these buses look magnificent inside and out. Best Impressions' Ray Stenning was let loose and he has truly excelled (sorry) himself. How long it will last after being assaulted by branches and bus washes I don't know, but the paint job on the exterior is arguably the best I've ever seen - I'm really struggling to think of anything better I've seen in recent times. Get inside and you are met with an interior East Anglia has never seen before. A superb colour scheme and contrast, really decent lighting that isn't in your face, information screens, mainly comfy seats - as usual with ADL and First the seats above wheels or electronics cupboards are far inferior to the majority. All seats have USB chargers, phone holders, coat hooks and a bell push. There are also two tables upstairs.The stairs are easy to negotiate and well lit one side with fancy lighting, and from the other by daylight as First went for the glazed stairwell option. However, since all windows are tinted, dignity is not in jeopardy. 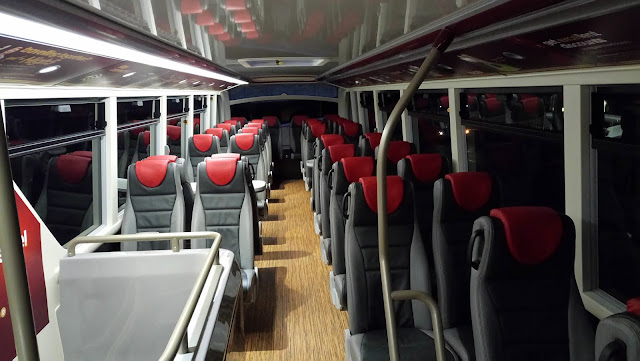 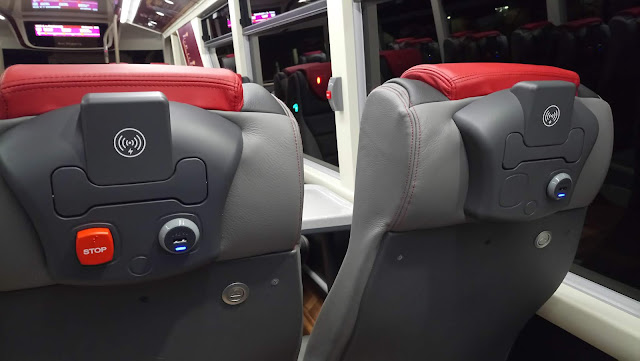 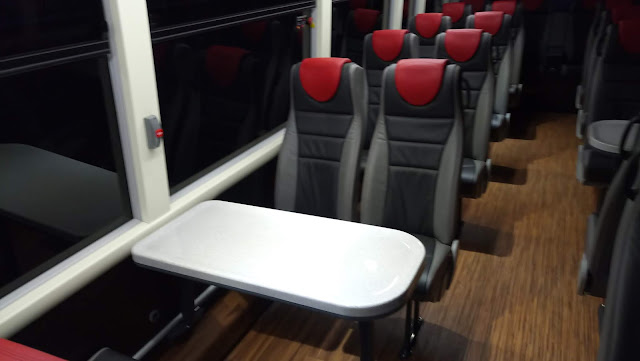 So to the routes. There are four variations on the route. Route A is the old route - All Stops. The A's run mainly early and late journeys, plus Sundays. Route B is hourly all stops to Kings Lynn, then runs fast to Wisbech, before reverting back to all stops to Peterborough. Route C is the game changer, hourly again running fast from Easton for Norfolk Showground to Swaffham, bypassing Dereham. This cuts 25 mins off the journey time from Norwich to Swaffham and Kings Lynn. That's a lot. It then runs all stops Kings Lynn to Wisbech, before heading to Peterborough limited stop by omitting Thorney. If you're doing the whole route the B takes 3h17m, and the C 3hr7m, so not a huge difference, but if you are going between intermediate stops, as most will, then much faster journey times are available.

Which leaves the D. With the C missing out Dereham the gap had to be filled, and it's been filled twice over with the D running every 30 minutes fast between Dereham and Norwich, competing directly with Konect's Straight8. Add the B and there are now three buses an hour from Norwich to Dereham, the same number as Konect. The next few months will be interesting to see if there is a big enough demand to sustain 6 buses an hour, and if not who will buckle first. but clearly a lot of thought has gone into the new routes, and I hope they do well. I'll certainly be tempted to Kings Lynn more often with a 25 min shorter journey time.


So, the buses look great inside and out, the routes and timetable have been well thought out. All that's left is what happens when the wheels start moving. All I can say is if you have a table seat then don't, for the love of God, put a drink on the table that doesn't have a sturdy lid or you will end up drenched. The suspension is so hard it beggars belief. Every tiny imperfection in the road surface is noticed. My quote of the day was a passenger saying "if you put a jaffa cake in front of the bus the bump would be enough to spill your tea". That is not much of an exaggeration. Typing on the phone is hard going, sleeping I'd have thought will be damn nigh impossible as I was being thrown around like a plane suffering heavy turbulence. And there were rattles. First day out in service there were rattles. I knew there would be rattles. It's ADL so of course there will be rattles, and until an operator sends buses back refusing to accept them in that state there will always be rattles. They also seemed to catch the wind badly too, as my drivers were struggling at times to keep in a straight line. But the Scania engine is powerful and has a nice deep rumble to it, the top speed is impressive, and ironically the ride seems better at 60mph than it is at 30. Whether that's a down force thing or not I'm not sure, but I certainly noticed a difference. Oh, and one more thing - tables are great, but please, someone, remind the designers that buses move and go round corners, hopefully, so having a table surface as smooth as an ice rink is only going to result in one thing, especially in emergency braking scenarios. Get non slip surfaces on them asap or that lovely floor is going to be plagued with coffee stains, and lawyers fielding burned legs claims!

I spent part of my day with Roger French, ex Brighton & Hove supremo, who took far more and better pictures than I did, and he has also written a review on his blog, which I'd recommend reading, especially as he found the buses faultless! You can read it here. I love picking Roger's brains and hearing him talk about his travels. Weather and man flu permitting I could be seeing him again very soon.

So conclusions. A lot of people have worked very hard to make this new Excel happen. The branding is good, timetable information good, the timetable itself is imaginative and deserves to succeed. The exterior and interior are the best this region this ever seen and it was worth the unsocial hours to be the first one on board. I just have this nagging feeling that in 6 months the body noise will have become unbearable and the ride even worse. I hope I'm wrong. When I set out this morning I was going to compare the Scania with the best bus that was trialled on the route - the BCI Enterprise, which is peerless in my opinion for comfort and ride quality. But I didn't. I didn't compare them to their predecessors either, those God awful E400's now to be found on the X1/2/11 between Lowestoft/Belton and Norwich. Instead I compared them to the Volvo B9 Geminis, who operated the route from 2008 - 2013, and are going to see their days out on local Norwich routes. 12 years on have we advanced. I'm not interested in fuel economy or technical details - I'm a passenger, and want my journey to be an experience I want to repeat again and again. If I want to then hopefully others will too. This should be the overriding ambition of any business, including bus operators, to have customers return time and time again. Despite the magnificent interior and exterior looks of the E400C's too many times I felt myself pining for a Gemini. I suspect the many senior citizens using the route who find their dentures loosened by the ride will do too. That is a shame when so many people have put so much into this project. However, that was the bit I knew well in advance of my 3am departure this morning. Everything else was a very pleasing and encouraging experience. It will be fascinating to see how the route evolves now.

One final footnote - the Norwich Peterbrough route is used extensively by tourists in the warmer months, many of them transferring onto the X1 at Norwich to continue to Great Yarmouth, yet unlike the old E400 and Geminis there are no luggage racks. I do hope we won't see any suitcase v buggy v wheelchair scenarios. Might be worth thinking about before we do.