A Day With BorderBus Maintenance Part One

In recent months the openness of operators towards enthusiasts has improved no end. First have really relaxed in a lot of ways, with the Olympian photoshoot at Yarnouth in December (see here) and Roundtree Way depot opening its doors to the public for the first time in 30 years for the Norwich Running Day last month (see here). However, decent though that was it was all staged. Never has a company allowed access to view the day to day goings on within the sacred walls of the maintenance department. Until now.

A couple of weeks ago I received an email from Dave Marshall, Chief Engineer at BorderBus, inviting me to spend the day observing what goes on, including watching a bus being serviced, access all areas and taking pictures of what I wanted. This is new ground for blogs, indeed very seldom is the media allowed to witness anything like that without a bit of staging going on. Nothing was staged today!

In fact it didn't go quite to Dave's plans. A couple of the buses had developed niggly faults which put the planned service on hold. Instead a water leak on one of the Presidents had to be fixed, then after some mystery electrical gremlins had been scared off, the E300 needed a safety inspection, which will form Part Two of this report tomorrow.

Yesterday I was on the top deck of a Plaxton President. Today I was underneath one getting a completely new perspective. BorderBus 202, one of the ex Metroline Volvo B7tl Presidents had developed a water leak and was being repaired by Dave's long term colleague, Colin Stammers.

A new piece of hose was required, and I was invited down the pit to inspect the repair. I'm no expert but it looks pretty good to me.

While I was down there I managed to get a picture of a Volvo badge not many will have seen before.

Of course after a repair like that the bus has to be road tested to make sure the repair is secure and watertight. That meant my first journey on one of the Presidents, and an opportunity to compare them to others. 202 compared very well. A rattle from the destination screen access panel upstairs but apart from that no problems. The seats are more solid than they look, but then they only have young backsides on them, that are probably more tolerant than mine is now! The main point with them is the gearboxes. They have Voith 3 speed boxes, which is great for poodling around London all day, but if they were out in public service all day just wouldn't work on the long stretches of open road in East Anglia. But the repair proved good, and 202 was back on its normal school run this afternoon.

206 was also off the road with a problem involvng a connector and a mild air leak. The replacement part arrived but proved incompatible. Here is Colin removing the wheel to get to the connector. 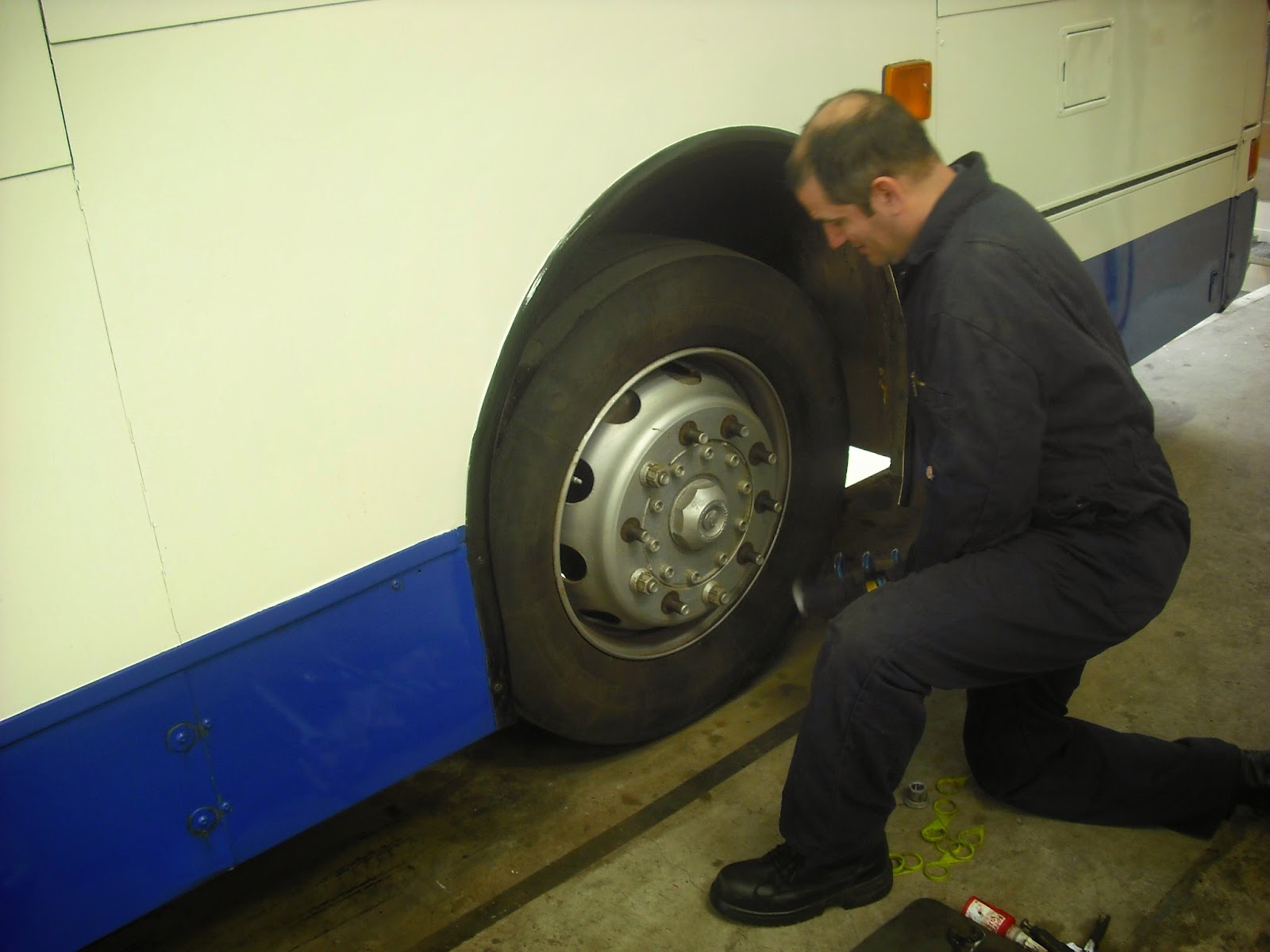 Dave and Colin are passionate about the vehicles whose well being they are responsible for. They are quite literally their babies, and they know that individual buses have individual characters, and with that comes different characteristics. Some may mock that but it's true. Some vehicles are fussier than others - one may not need much looking after and will plod on day after day, and another one needs constant TLC. Dave made a point about breaks that I hadn't thought of before. He said that drivers get breaks, and of course that's right, but these days seldom do the buses. One driver gets out, another gets on and off they go again. Layovers at termini are shorter than they used to be. There is more pressure on the wheels to keep turning more than ever these days, and the buses themselves are getting no rest, which is putting more strain on the components than ever before. Give the buses a break like the drivers, as they do at BorderBus with the one man one driver policy and it puts less strain on the vehicles themselves. Makes sense if you have the vehicles to operate that policy.

After 202 had been road tested it was time for a safety inspection of the E300. I'll have quite a lengthy post tomorrow on that, including how you can see for yourself what forms a safety inspection, and believe me it will be far more than you think unless you already know! My thanks to Dave and Colin for granting me the opportunity to break new ground for blogs, and look out for part two tomorrow. Here is a taster pic - a view of the E300 not many have had.