The last round up before Christmas and to be honest I haven't saved much as everything this week has demanded instant posting, so it's going to be more of a light hearted one this week, plus a couple of items that demand a repeat.

This week has seen a lot of companies getting into the Christmas spirit, with one still thinking it's Summer! Santa has been driving buses all over the country, most notably in Lowestoft on Thursday, choosing 33423 as his sleigh. Other buses were being adorned with all kinds of festive decoration. This is BorderBus's E200 BB62 BUS as seen at Beccles yesterday.

However over at Ipswich Buses it is still glorious June and those lugging Christmas shopping back to Whitton today may have been more than a little surprised to see a certain Leyland Atlantean waiting for them! IB themselves were so impressed they posted this pic on Twitter and made my day! I have a feeling this won't be the last pic of IB9 before Christmas! 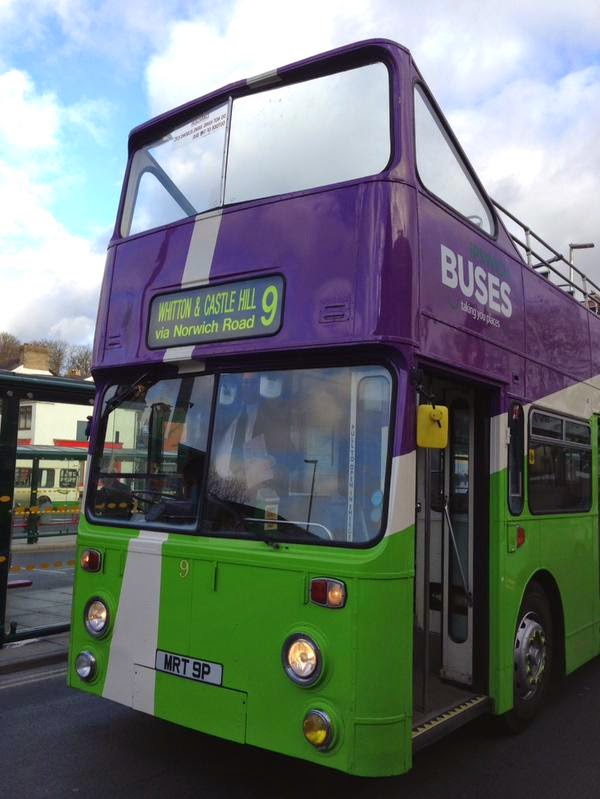 I make no apologies for posting this pic for the second time in 36 hours. If 33423 is to be repainted soon into full Excel livery then I have a feeling there maybe a couple of worthy replacements for most photogenic buses at Ipswich in the form of 69426 and when it returns 69428. There has been anticipation of the alternative livery for a few weeks now and boy has it been worth the wait. I assume when their dedicated route starts in April there will be much application of route vinyls but until then, and as long as they are kept clean - including the wheels, these look superb. Here is one of David Warren's pics that are so good they could be published anywhere.

Now there is debate if that blue is Excel blue - the livery is certainly based on the Excel livery, which apparently was Lord Speed's request, but I think it is a couple of shades darker - finally Ipswich Town blue in Ipswich?. Here is Excel Gemini 37578 for you to compare.


Now you know by now that I never miss an opportunity to post pics of the Yarmouth Olympians and Friday saw me down by Beach Coach Park to see what was on the Bernies convoy. But first let's see what was in the coach park itself.

So at 1415 you could have seen myself and Cameron, who had joined me, squinting into the distance to see what was on the way, and we were were treated to 3 Ollies leading an ALX400. Thank you Bus Gods!

Now this has happened a few weeks late for Halloween but I was looking at the pic I posted on Friday of Norwich President 33100 in her new Turquoise livery and I noticed a couple of things that I, and indeed no one else had spotted on first posting. If you look closely you will see two mysterious faces, one in the bottom centre of the windscreen, and the other on the lower deck just above the Norwich logo. I have asked da Boss whose only concern was had they paid their fare. In my driving days I had several what I would describe as supernatural experiences, but this is quite bizarrre, so if anyone from either First or Simon Morris in Ipswich, where the pic was taken, can explain what is in the pic I'll be delighted to publish it as I am totally unable to find a logical reason for it!

Back in September I announced the STEVE Awards, which would recognise various aspects of excellence within the public transport industry. I am delighted to report that the first STEVE award was presented to a member of staff at Anglianbus this week, and I am hopefull that four more will be presented before the end of the year. There will then be a special post. The final three awards will be presented in the New Year as the recipients concerned aren't as local so more complicated presentation logistics apply.

So all that remains is for me to wish each and every one of you a very Merry Christmas, or whichever Holiday you are observing, and next week's Round Up will be a review of the year, which may well take more than one part!
Posted by Steve W at 11:06