There are a lot of little things to get through today, with vehicle transfers, orders, repaints and engine transplants all going on.

First of all something that was reported by David Green from Galloway last week (see comments on "Summer Break" post) is that an order has been placed for 2 new Optare Solo SR's, with a second hand one also making up the numbers. One can only assume this is for the 113/4 Diss/Ipswich service which Galloway take over next month. David also reports that a second hand double decker ex London has also been purchased - more details on that to follow. Many thanks, David for the continuing updates.

Sticking to little buses serving Ipswich and with First taking over the 39 (renumbered 59) and 72 from Beestons it was decided that nothing at Ipswich was small enough for the routes so after flirting with the idea of Jersey Darts it was decided to tansfer two of Norwich's ex Lowestoft E200's. Sunday 45119 and 45928 went up to Rotherham to get the Ipswich treatment and refurbshment. That obviously leaves the quota for the tight 39 in Norwich two buses short so you'll be surpised to learn the E200's have been replaced by two yellow lines. No not Yellow Line buses (though nothing would surprise me) but the really tight spots on the route have had double yellow lines painted to enable bigger vehicles (probably Streetlites) to cope with the route. I look forward to updates from various travel sites telling me a 39 has got stuck because of an illegally parked car!

Also on the move are Rotherham B10BLE loanees 60621 currently at Yarmouth and 66112 currently at Lowestoft, which are both moving to Norwich to cover repaints and presumably the two E200's. Other Lowestoft vehicles ALX400 30900 and Jersey Dart 43863 (formerly Yarmouth) are on loan to Yarmouth. This means a stay of execution to the last SLF Dart at Eastern Counties - 43466 at Lowestoft, which was earmarked for imminent withdrawal.

'Tis the season to be repainting, and I have three of the latest repaints for you to see, courtesy of my second pair of eyes (infinitely better than my own) otherwise known as Cameron Robinson. First up is the latest repaint by Sanders of former Anglian Scania YN03 UVM which used to be shrouded in an all over wrap for Sheringham postcards. This means everything owned by Sanders is now in Sanders livery.

Secondly a pair of Konect vehicles that have been painted into standard Konect livery from their respective P&R liveries. First up is VDL Gemini 502, YJ05 PXC, previously seen in pink!

Cameron assures me this is the first pic to be published of formerly Harford P&R liveried 602, E400 SN10 CFF, which used to look like this...

Many thanks, Cameron for your invaluable contributions to the blog - couldn't do it without you buddy!

I bumped into Cameron in Norwich on Friday and virtually frogmarched him to take a ride on newly refurbished First Norwich President 32100, her of the new seats that Cameron claimed to be really comfortable. Knowing that the sitting part of Cameron has to be composed of different chemical elements to that of normal people (he says B7L seats aren't hard) I was ready to force him to eat his words while we did a trip to Spixworth and back. However I can't. They are comfortable and a huge improvement on the old seats. The whole bus feels tightened up and is by far the best President in Norwich (in the name of all that's holy start putting rubber seals on the destination screen access doors) and I have a tip for anyone travelling on it - kick the yobs off the back seat upstairs and sit on that - luxury!!

Earlier in the week I posted an update from Chris Jenkinson of Nu-Venture down in Kent reporting that former Norfolk Green Agoaline 898 needed an engine transplant using the engine from sister 897. I'm pleased to inform you that the surgery appears to have been a success and 898 now has a new heart. It is yet to be fully tested and Chris has promised to let me know when 898 is back on the road. He has sent some pics of 898 undergoing the surgery which I'll use in a special when she's back on the road but here is a taster with 898 up on the ramps next to 891, which was being prepared for MOT, which I'm happy to announce she passed, so at least two Agoralines will still be going strong. Thanks, Chris - think I'll just call you Agoraman from now on!

And finally Grahame Bessey (these Yarmouth bloggers are really nice people) has sent me pics he took at Yarmouth Station of East Anglian's noisiest celebrity since Alan Partridge hung up his microphone! The Short Set, or Loud Set as it's been nicknamed is attracting enthusiasts from far and wide and even people who don't normally give a train a second glance are paying close attention to it. A new loco for the set, 37419 replaced 37425 and here she is heading the set at Yarmouth. Many thanks, Grahame and hope you enjoyed the racket! 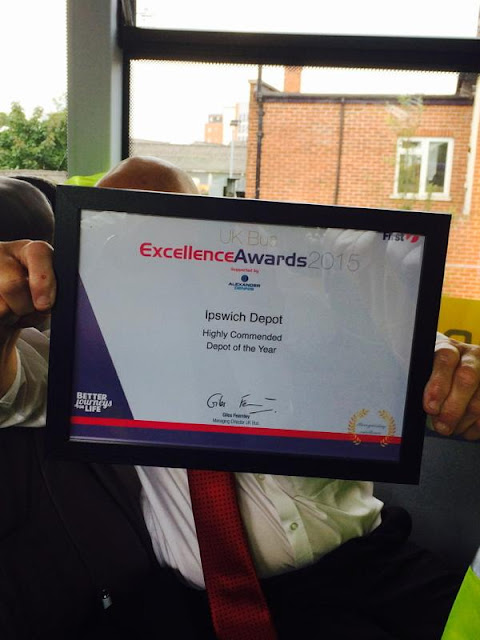