Blast from the Past

As this is a purely self-indulgent blog I'm going to recall my own experiences as both an enthusiast and driver. As most of this took place in Kent I apologise if it is a bit off area! So we may as well start at the beginning. I clearly remember the day I became interested in buses. It was 1972 and I was 5 or 6, waiting with my mother at the bus stop iin the village in Kent where I grew up. A different type of bus to usual pulled up - it was in a brighter green, the seat covers were a different design and it smelt like only new vehicles do. It was a new Leyland Atlantean painted in National green and that was it - the seed was sown and my sentence as a transport enthusiast was confirmed.


The most striking livery any of that batch of 20 Atlanteans saw was when 3 of them were painted in Invictaway black when M&D launched their Medway - London service. I spent many pleasant hours travelling up and down the A2 on the Atlanteans which had been fitted with coach seats from withdrawn dual purpose Reliances. 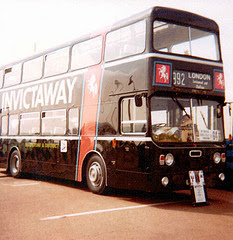