It's the 1st of March, St David's Day, and also the birthday of my first real girlfriend - Happy Birthday Rachel wherever you are, the Summer of  '83 is still engraved in the memory! It is also Sunday so that means another round up of what's been going on this week. Actually not much hence some rather desperate headlines!


It was announced this week that Ipswich Buses engineering department had become the first in the country to be awarded CPT's new Workshop Accreditation. This is no mean achievement as the criteria is pretty stiff. Congratulations to Nigel Daniels, Engineering Manager at Ipswich Buses and his team, and it seems not only do we have bus wars in Ipswich, but maintainance wars too, as I have said for a long time that the First Ipswch team perform miracles on a daily basis too! The link to my earlier report will be found later in this round up.

For the last Heaven knows how long there have been rumours, counter rumours, proposed dates and postponed dates about Class 37 locos taking over the Short Set. I revealed last week that a Class 37 had arrived at Norwich and this week driver training started. It is expected that these beasts will take over from the increasingly unreliable 47's in late Spring/early Summer. I still think they are the most intimidating loco ever built, especially when hammering towards you at 90mph!

Now if you remember when I went to Essex last week I showed some of First Essex' Volvo B7rle's that had been given a green stripe denoting the installation of the CRT system - which for those of you who weren't paying attention stands for Continuously Regenerating Trap, a system that cleans up emissions from engines. Well it was brought to my attention this week that Ipswich Buses have treated no less than 31 of their fleet with the same system - including all of the X-LBJ Darts. No song and dance or green stripes, they just got on and did it. I understand that this was assisted by Suffolk Count Council in conjunction with the Government's Clean Bus Technology Fund, so well done to all.

I got a surprise the other night. I got a sneak preview at some pics of First Yarmouth ALX400 32061 which is at Rotherham for DDA upgrade amd repaint. The surprise was she looks incredible. Unfortunately I can't publish the photos here, but do not despair - just head over to Great Yarmouth Bus Page and you can see the pics there, and well worth it it is I can promise you. I understand she is due back at Yarmouth sometime next week and I'll try and get some pics towards the end of the week.

It is the end of an era tomorrow when East Coast Trains, the Government owned company who have been running the East Coast Mainline for the last few years hand over to Virgin East Coast, thus giving Virgin the monopoly on both London - Scotland Mainlines. It is widely accepted that East Coast Rail have turned the line around after the highly unpopular National Express, and Virgin have a hard act to follow. Virgin are set to unveil their first repainted loco and DVT on Monday, which I guess will look pretty similar to the Pretendolino when she was running on the West Coast Mainline. We will be looking for cheap, easy to understand fares and more seats on the line in time.

In fact Virgin have wasted no time in letting the world know they are the new guys in town as far as the ECML is concerned. VTEC posted this on Twitter early this morning. 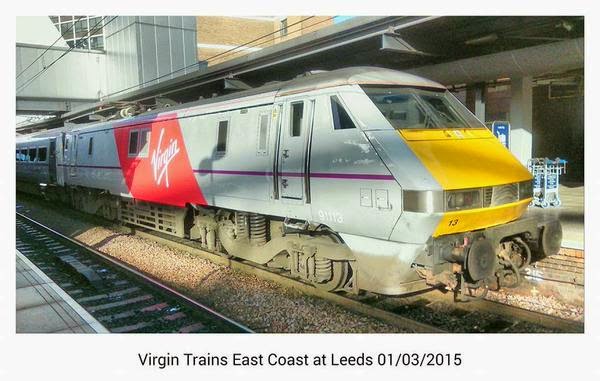 On Monday I went to Long Stratton (see link below), and I praised Norfolk County Council for having the timetables on display so promptly. Well I have an apology to make. Those timetable cases are not the responsibility of NCC but First themselves, and the real credit should go to the Commercial team at Norwich, and Phil Harvey in particular, who I am told spends a lot of time and effort making sure timetables at stops are updated. My thanks to Chris Limbach, Network Officer at FEC for getting in touch and putting me straight.

Sometimes it seems as though some things are just meant to be. On Wednesday I was on my way into Ipswich for a meeting when I got a message saying that unfortunately it had to be postponed. Not being willing to spend 5 hours in Ipswich with nothing to do I called Suffolk Links to see if they could get me home any earlier than booked. Luckily they could, but it meant doubling back to Saxmundham. Continuing the luck I knew there was a 64 going the other way in 5 mins, so I jumped off 69008 (thankfully as it really rattles that one), and as predicted within 5 mins 66981 came the other way. We had just left Wickham Market when I overheard a couple of ladies at the front of the bus talking about  bus services. Although I couldn't hear everything I did make out the words "bus driver", "friendly" and "award". Surreal doesn't describe it. So unable to contain my curiosity I moved down the bus and asked the ladies if I had heard correctly and they had been talking about a driver getting an award. "Yes", they said, "Robin - do you know him"? "Know him", I replied - "I gave it to him"!!

It turns out that these ladies were regulars on the Anglian 165 service, before it was axed, and there is a circle of former passengers who still keep in touch. Robin was a regular on the route, and it transpires that one of the circle is a reader of this blog, and when she saw the STEVE awards post (click here if you haven't read it) she alerted all the others in the circle. I understand that if anyone restarted the 165 there is a group of passengers waiting for you. So a big hello to all my Leiston readers, thank you so much for reading, to Lena and Peggy (was told it HAD to be in that order) thank you for showing me what an outer body experience can be like, because in the week of the Oscars and the Brits, I heard people talking about the STEVEs on my bus! Brilliant!

As well as the good people of Leiston I would like to welcome all the new readers who have started reading over the last week or two to the blog. Viewing figures this week have been records, with over 5,000 page views this week alone. Friday saw the most ever in a day - over 850 which considering I didn't post that day was quite something. Then that was beaten on Saturday. If anyone has anything they would like me to post about, or publicise then let me know and I'll do my best. Thank you all for taking the trouble to read, and then coming back for more!

Finally for the news this week murmurings are reaching me about a rather surprising fleet movement in the coming weeks. I found it hard to believe when I first heard about it, but I have had it confirmed that the idea is being seriously discussed. Watch this space and when I have anything concrete I'll let you know.

Last week I asked you to name the dead end rail locations in Norfolk and Suffolk. It clearly stumped most of you but the ever willing Joe Wilson got all but one of them. In Norfolk apart from Norwich you have got Great Yarmouth, Kings Lynn, Cromer and Sheringham. Suffolk has the real curve ball, with Lowestoft, Felixstowe, Sudbury and Sizewell, the single track freight line that is still used (as in Class 37 pic above).

So this week we are gong a little further afield. One of Megabus' routes is the M20, which runs from London to Glasgow via Sheffield, Leeds, Newcastle and Edinburgh. Like the railway they have three letter abbreviations for the stops, just a bit different, so LON, SHE, LEE and NEW etc. However one of the stopping points on that route is WOO. So the question this week is simply where is WOO? Answers by email please.

Finally here are all this week's posts, with easy links should you have missed any.

Service 35 Commences
I venture to Long Stratton to get the first shots of First's new 35, which is half of the former 36 which still runs from Norwich to Horsford.

Back To The Dark Ages
Wow did this post create some feedback! I really didn't mean it to be controversial. I was exploring the theory that mutual cooperation between operators and enthusiasts can lead to facts being published and less rumour and speculation, and asked the question if customers were entiltled to more detailed information when things go wrong. It turned out to be a multi-ended stick!

More Awards For Ipswich Buses
As reported above, Ipswich Buses Engineering department have been given CPT Workshop Accreditation.

When Is A Coach A Bus? Grey-Green Special
This post has proved to be very popular, a look back at Grey-Green's rebodied fleet of B reg Volvo B10M Paramounts, some of which spent time in Colchester.

That's it for this week, have a great week everyone and keep checking back for posts throughout the week.